New York (CNN Business)The rise of AMC, GameStop, Wendy’s and other Reddit-approved stocks is a clear sign that the wisdom of the crowd can help average traders make money on Wall Street.

Although many professional investing firms are wary of the meme stock rally, others are embracing the trend — and it doesn’t seem to be waning.
One notable player is SoFi, an online-brokerage and financial services company that recently launched the SoFi Social 50 (SFYF), an exchange-traded fund that invests in the 50 stocks most commonly held by customers on its platform. The ETF rebalances every month, and it currently has AMC (AMC) as its top holding and GameStop (GME) as the fourth-largest.

But SoFi investors aren’t just flocking to meme stocks: Major companies in the S&P 500, such as Apple (AAPL), Amazon (AMZN), Microsoft (MSFT) and Disney (DIS), are all among the ten biggest investments in the fund. (Tesla (TSLA) is the second-largest holding, although lately it’s become both a meme stock and a top contributor to the broader market.)

A spokesperson for SoFi said this shows many individual investors are not just throwing their money at meme stocks. It’s more of a “barbell approach of lottery tickets and steady blue chips,” the spokesperson said.

Some worry that the meme mania won’t end well, leaving investors who bought high with very big losses. It’s similar to the worries that some have expressed about bitcoin and other cryptocurrencies following a big slide in May that has extended into this month.
“Valuations are absurd,” David Trainer, CEO of New Constructs, an investment research firm, said about meme stocks. “There is this mob mentality and investors have zero sense of what the fundamentals are and what they mean.”

It’s a common theme with market trends.
“What happens every time there is a new generation of people that have not been in the market is that they learn as they go,” said John Jacobs, executive director for The Center for Financial Markets and Policy at Georgetown University. “But what’s different today is social media and the gamification of the stock market.”
So how can investors jump in without getting burned? Some firms are managing to straddle the line between meme stocks and value stocks.
For example, investing firm Tuttle Capital just started a new FOMO ETF (fear of missing out) that focuses on stocks that are popular with retail investors, and it does own small stakes in AMC and GameStop. But CEO Matthew Tuttle said he’s finding better investments in other stocks, such as Johnson & Johnson (JNJ), Pfizer (PFE) and UnitedHealth (UNH). 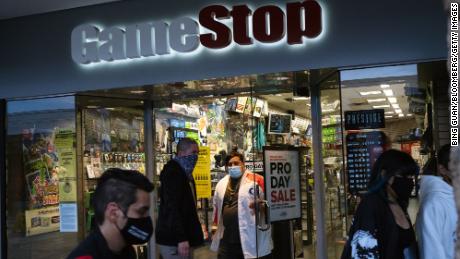 Tuttle, who rebalances his fund weekly, said the ETF has flocked to these companies because investors have been scooping up more stable dividend-paying health care stocks lately. So in his mind, the market now is in a “fear of missing out on the value” rally.
“The problem with some thematic ETFs is that they are stuck on one theme,” Tuttle said. “That theme could underperform or become obsolete. We want to invest across different themes so we can smooth out the returns.”
“I want to participate in the meme stock moves, but at some point that is going to end badly,” he added. “Your head’s got to be on a swivel because when it ends it’s going to be quick. I sleep better at night with a smaller weighting.”

Not a repeat of the dot-com bubble

One Wall Street veteran who ran a popular internet stock fund in the late 1990s (and still runs it) said he doesn’t see many echoes of dot-com froth with meme stocks.
“I don’t agree that this is like the late 1990s,” said Ryan Jacob, chief investment officer with the Jacob Internet Fund. “Now, there are half a dozen to a dozen meme stocks. Back then, the tech rally was much broader and actually impacted the major market indexes.”
If there is a bubble in meme stocks today, he added, it’s more about individual stocks overheating as opposed to a major sector. After all, AMC and GameStop aren’t really all that similar other than in their consumer-facing orientations.
Instead of meme stocks, or even top techs such as the FAANGs, Jacob prefers to look for hidden gems that aren’t followed as closely by retail traders and Wall Street analysts.
Top picks in his fund include crypto firms Voyager Digital (VYGVF) and Silvergate (SI), mobile services firm Digital Turbine (APPS) and database company MongoDB (MDB). The fund also owns more well-known stocks including Square (SQ), Twitter (TWTR), Zillow (Z) and Yelp (YELP).

“People are surprised that we don’t own Tesla, Netflix, Zoom or Amazon. But we’re more eclectic with our holdings,” Jacob said.
That’s clearly not a bad thing: Despite the dearth of meme stocks and top techs, Jacob’s fund is up more than 20% this year and over 90% in the past 12 months.
Source: Read Full Article