AMP says there is no certainty a deal with US investment firm Ares will proceed as the exclusivity period between the two ended and speculation mounts over the leadership of the wealth giant.

AMP signed a non-binding agreement in February to carve out AMP Capital’s private markets business and sell 60 per cent to Ares for $1.35 billion.

That agreement included a 30-day exclusivity period, which ended on Sunday, at which time a binding agreement could be signed and the portfolio review would be concluded. 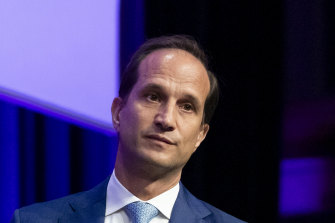 AMP chief Francesco De Ferrari. The wealth giant says there is ‘no certainty’ deal with Ares will proceed. Credit:Dominic Lorrimer

AMP’s board had separately said it was negotiating the future leadership of the company, which would be determined once the portfolio review ends amid speculation chief executive Francesco De Ferrari would resign.

AMP on Monday morning released a statement to update the market on the status of the Ares deal, that made it clear that no binding agreement had been signed.

“AMP and Ares continue to work towards a potential transaction and Ares has expressed interest in acquiring 100 per cent of the private markets businesses,” it said.

“There is no certainty that a transaction will proceed, or the terms, size or structure on which it would proceed. Any transaction would remain subject to approval of AMP shareholders.”

The update came after another ASX filing, where AMP said it had agreed to end the management agreement of a New Zealand-based listed real estate investment trust (REIT) for $197 million.