Home » Markets » ‘As good as it gets’: Rate rises tipped to bring headwinds for banks

This year’s rapid-fire interest rate increases have been highly lucrative for Australia’s banks, but there’s growing debate about how long the good times can last.

The big four’s $28.5 billion in combined annual profits, the highest since 2018, were helped by sharply wider profit margins in the second half, a trend that is the direct result of rising interest rates, and is expected to continue into 2023. Yet at the same time, the lenders have not yet experienced the downside from rate rises, which are likely to eventually cause more customers to default on their loans. 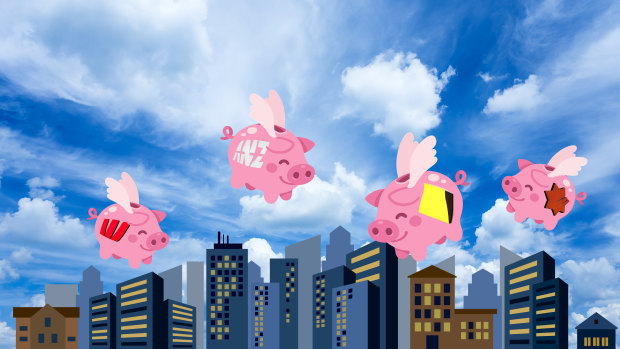 As interest rates slow economic growth, the market is on the lookout for any sign of rising bad debts.Credit:

But how long can this happy situation for the lenders can last? At some point, experts warn, the costs to banks from rising interest rates will come more sharply into focus, as more borrowers struggle to manage the ballooning repayments on their loans.

The aggressive tightening from the Reserve Bank, and expectations of a much weaker economy in 2023, are bringing that debate to the fore.

Reserve Bank governor Philip Lowe this week gave homeowners the unpleasant pre-Christmas news that the cash rate was rising to 3.1 per cent, the eighth consecutive rate rise. Lowe also said he expected to raise rates again in 2023, and money markets are betting on two more rate rises next year, taking rates to 3.6 per cent.

A key question for sharemarket investors is what this sharp rise in rates will mean for the big four – Commonwealth Bank, ANZ Bank, Westpac and National Australia Bank – and their millions of borrowers. Except for ANZ, shares in all four have outperformed the ASX 200 in the past six months.

‘My view is in the next 12 months banks will struggle, even though they will make more profit in the next three months – but that’s as good as it gets for the banks.’

With the economy expected to slow, how long can major bank profits and share prices (in most cases) remain in the sweet spot they’ve recently occupied?

Not too much longer, says Tribeca Investment Partners portfolio manager Jun Bei Liu. While she acknowledges banks are doing well now, Liu believes the economy will experience “true weakness” next year, including higher defaults. In that environment, she says it’s “very unlikely” bank shares can outperform.

“During the economic slowdown periods, banks never perform well, simply because they are a very leveraged play on economic growth,” Liu says.

“My view is in the next 12 months banks will struggle, even though they will make more profit in the next three months – but that’s as good as it gets for the banks.” 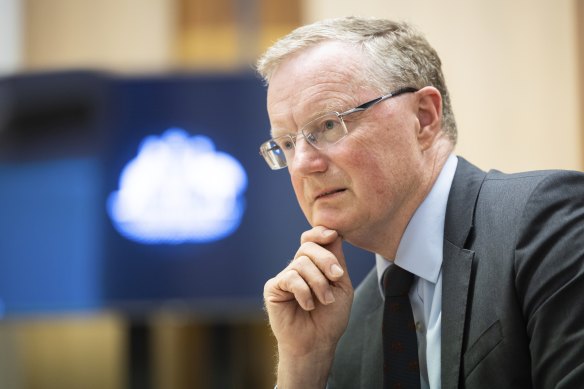 RBA governor Philip Lowe acknowledges that the full impact of rate rises on household budgets has not yet hit.Credit:Alex Ellinghausen

Her comments illustrate the mixed forces facing bank investors in 2023. The banks’ underlying businesses are in strong shape, with low bad debt charges and rising margins – the result of banks lifting rates on loans faster than rates on deposits.

But markets are forward-looking, and the future is looking tougher due to a weaker economy that is likely to feel the sting of higher rates.

Lowe acknowledged this week that the full impact of rate rises on household budgets had not yet hit, because banks take months to lift repayments, and an unusually high number of people are on fixed-rate loans. However, no one doubts there will be some squeeze on household cashflow – indeed that is the whole point of rate rises.

The full impact of higher interest rates is one of the critical unknowns facing the economy, but investors have been running through a range of scenarios on the topic.

Reserve Bank analysis in October found that if interest rates hit 3.6 per cent (as markets expect), most borrowers would be “well placed”. Yet it also said 15 per cent of households would see their spare cashflows turn negative, meaning their incomes would not cover mortgage repayments and cost of living expenses.

Citi banking analyst Brendan Sproules this week explored the impact of rising rates on households, citing investor fears of an “imminent wave of mortgage defaults” from homeowners with variable-rate loans. Despite such worries, Sproules said that so far, variable-rate borrowers had experienced a smaller increase in their repayments than expected, partly because many customers had been paying off their loans ahead of schedule.

Sproules said the weak spot was more likely to be among fixed-rate customers who locked in ultra-cheap loans when rates were at record lows, but who are facing “significant repayment shock” when their fixed-rate loans roll over to a higher rate.

This “fixed-rate cliff”, as it’s known, is already being closely watched by banks, and it’s expected the wave of fixed-rate expiring loans will peak in the second half of 2023.

Citing NAB data, Sproules said about 60 per cent of the bank’s fixed-rate customers were facing an increase in their repayments of more than 50 per cent, assuming a peak cash rate of 3.6 per cent. Sproules said he expected rising mortgage defaults from early in the 2023-24 financial year, and the most vulnerable customers were those with limited “buffers” who had borrowed a large multiple of their income.

While that is grim news for those borrowers, Sproules suggested the impact could be more “modest” than expected for bank shareholders, as the most vulnerable mortgage customers made up less than 1 per cent of banks’ mortgage books.

Credit Suisse analyst Jarrod Martin also painted a relatively sanguine picture for the banks’ mortgage books as the full impact of rate rises become apparent in the first half of 2023. In a note, Martin he said the bigger risk could come from business borrowers that are hit as stretched households pare back their spending.

“While losses in consumer segments are likely to be small, we are wary about small businesses exposed to monoline discretionary expenditure as we believe this will be where the stress is felt from a bank perspective,” Martin said.

Martin also said the benefits of wider margins would be “short-lived”, predicting that by the second half next year, the cost of deposit funding would rise, and banks would need to compete hard for loans in a slowing market.

For now, however, the full effects of rate rises are months away from being felt. Westpac chief executive Peter King last month flagged there would be mortgage stress, but he said it could take until the March and June quarters of next year to “get a good read on what’s happening”.

Until then, the market is likely to be on the lookout for any signs of chinks in the banks’ armor.

Principal at fund manager Alphinity Andrew Martin says the market is “skittish”, as it knows a downturn in economic growth is coming at some point, so investors are searching for any potential signs of weakness.

He said banks’ underlying businesses were still doing well, noting the latest earnings results showed no signs of rising bad debts, adding that banks were carrying solid bad debt provisions that were taken as a precaution during the pandemic. But as rising interest rates gradually put the brakes on economic activity, more investors will worry about loans going sour.

“The closer we get to some sort of downturn, the more people are going to talk about credit risk,” Martin says.