Bendigo and Adelaide Bank chief executive Marnie Baker maintains the lender will still benefit from higher interest rates, after its stock plunged as results showed profit margins were being hammered by stiff competition.

Bendigo shares tumbled 8.1 per cent to $9.91 on Monday, after it revealed a sharp decline in its net interest margin, which compares a bank’s funding costs with what it charges for loans and is a critical influence on profitability. 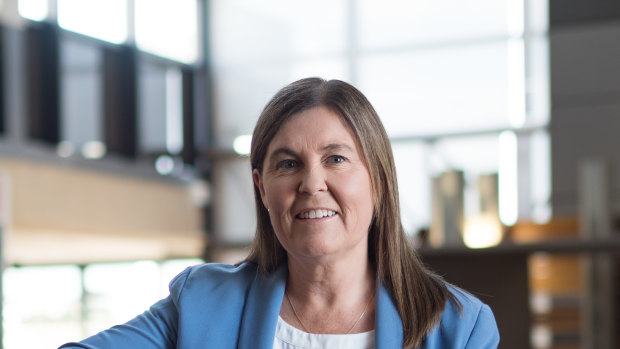 The regional lender, which delivered 9.4 per cent growth in cash earnings to $500.4 million, had been viewed by the market as one of the biggest winners from rising interest rates, helped by its skew towards lower-cost deposit funding. However, Monday’s result fell short of these expectations, as Baker also said the economic outlook was “a little bumpy”.

Although Bendigo’s larger rivals have also posted falling margins in recent results, Monday’s annual results showed Bendigo’s net interest margin tumbled 21 basis points to 1.74 per cent, lower than analysts had expected. The bank also said that as interest rates rose, and margins improved, it would share a greater portion of its revenue with its community bank partners, which surprised some in the market.

Baker said rising interest rates would still be a “net positive” for Bendigo, and the revenue-sharing with its community banking partners was not new, as the model had been in place for 24 years.

“I would have expected that the market would have understood what would occur in a rising interest rate environment,” Baker said.

Even so, analysts said the results underlined the ongoing squeeze from competition in home loans.

“While recognising benefits from higher rates, we continue to see downside risk to consensus earnings in the medium term,” the analysts said.

Opal Capital portfolio manager Omkar Joshi said investors were likely to lower their expectations for how much Bendigo benefited from rising interest rates after Monday’s guidance on margins. In another blow to investor sentiment towards the stock, Joshi said Bendigo had not given investors much clarity about why the margin outlook was weaker than many expected.

“This is supposed to be one of the banks with the most leverage to rising rates, and that’s clearly not coming through,” Joshi said.

Bendigo’s total income rose 0.3 per cent, while the bank cut its operating expenses by 1.1 per cent. The bottom line was helped by a $27.2 million reversal of a previous bad debt charges, a trend across the banking sector, with fewer customers falling behind on repayments.

Bendigo will pay a final dividend of 26.5 cents a share, which will be fully franked and paid on September 29.

As slower loan growth causes banks to compete harder, Baker said she did not see the stiff competition between banks for new mortgages abating.

Baker last month said Bendigo had been disappointed by ANZ Bank’s $4.9 billion move to buy Suncorp’s banking unit, as Suncorp’s board had not engaged with Bendigo about a potential merger between the two regional players. Baker reiterated these views on Monday, emphasising the importance of regional banks for competition in the industry.

“We did think that bringing two regional banks together would have been really beneficial for customers, for communities and shareholders,” she said.