The Chinese can’t quite figure Trump out, China expert says

Gordon Chang, author of ‘The Coming Collapse of China,’ discusses the country’s perspective of President Trump.

As the Democrats ratchet up impeachment talk, they may be giving the Chinese false hope that high-level trade negotiations with the U.S., which resume Thursday, will get easier.

“They are looking very closely at what’s going on in the U.S., and this impeachment inquiry is effecting, I think, their negotiating position, making them much tougher than they ordinarily would be,” Gordon Chang, the author of “Coming Collapse of China” told Fox News’ “Tucker Carlson Tonight.” “They have signaled in the last couple days they’re just not going to talk about the core issues that U.S. negotiators demand that we discuss,” Chang added.

However, underestimating the U.S. and Trump may be a miscalculated move, Myron Brilliant, executive vice president and head of International Affairs at the U.S. Chamber of Commerce, tells FOX Business.

“With rising tensions, it would be a huge mistake for China to play the waiting game on trade talks. Concerns over China’s trade practices are not a partisan issue. There is strong bipartisan consensus in our country that China needs to take concrete and measurable actions to address a range of unfair trade practices.  China should be doubling down during this critical window to make constructive offers that will lead to a high-standard, enforceable agreement" he said.

In the last 24 hours, the White House has upped the pressure on the Chinese. 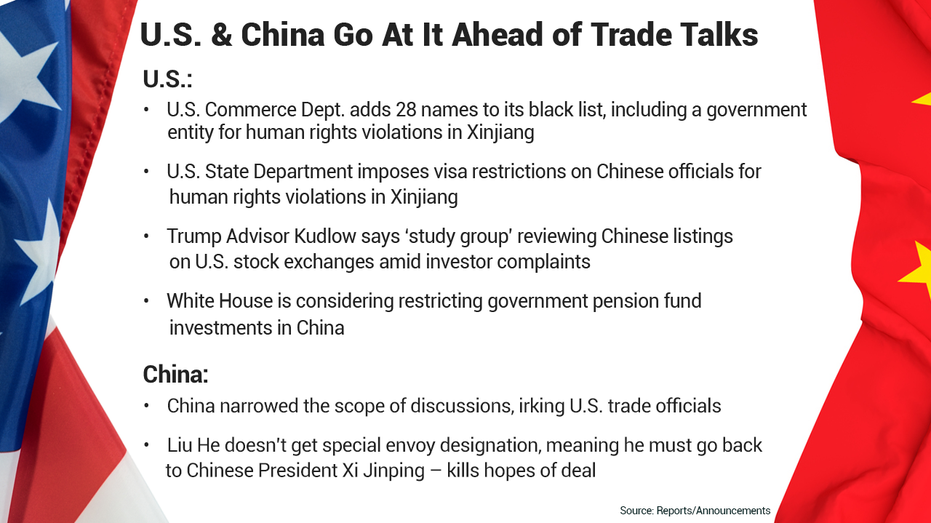 On Tuesday, the U.S. State Department imposed visa restrictions on Chinese officials for human rights repression in Xinjiang. This followed a move Monday when the U.S. added 28 names to its blacklist, including a government entity. Inclusion on the list, which designates entities believed to act in ways contrary to U.S. foreign policy or national security interests, restricts access to American goods.

“The idea that we’re going back to a peaceful, harmonious, happy U.S.-China relationship, I think that’s over,” Michael Pillsbury, American director of the Center on Chinese Strategy, told FOX Business’ “Mornings with Maria.” “It’s clearly going to be a kind of certainty that there will be U.S.-China friction.”

On Tuesday, it was announced that Chinese Vice Premier Liu He, who is leading the delegation, has not been designated as special envoy, meaning he cannot make any decisions and must report to President Xi Jinping, shelving any hopes for a deal to be reached this week.

Meanwhile, the IMF warned the U.S.-China trade war, if it continues, will produce no winners.

The 15-month long trade war between the U.S. and China could cost an increasingly fragile global economy about $700 billion, or 0.8 percent of GDP, by 2020, Kristalina Georgieva, the new chief of the International Monetary Fund, said in her first speech on Tuesday.

"It's a little bit like you know a sumo match, they're sort of both in the ring grappling," Center for Strategic and International Studies Scholl Chair and Senior Adviser Bill Reinsch told FOX Business.

"We've gone beyond stomping on the earth and glaring in each other's face, but they can't agree but they can't leave. If Trump leaves it's a failure on a signature issue. If they leave it lets him off the hook. He can blame them for everything, exposes them to further retaliation which they don't want. So everybody keeps talking."