As businesses face growing pressure to put more weight on environmental and social issues, there has been a long-running debate over how companies should balance shareholder interests with those of customers, staff and the wider community. 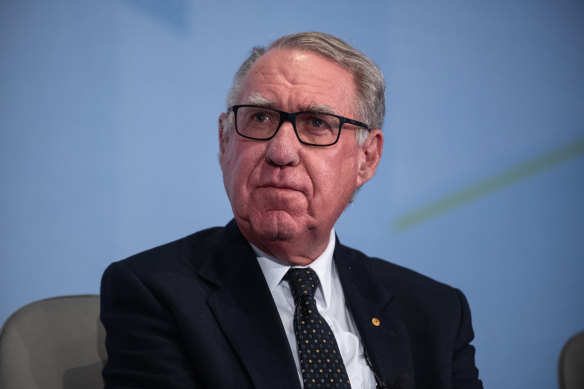 David Gonski says it can still be profitable for companies to consider other interests, besides those of shareholders. Credit:Flavio Branceleone

The issue was thrown into the spotlight in the 2018 banking royal commission, and in July, the Australian Institute of Company Directors (AICD) updated its guidance after commissioning a legal opinion from barristers Bret Walker SC and Gerald Ng.

Gonski, chancellor of the University of NSW and a former chairman of ANZ Bank, was last week asked about the legal opinion at an event held by philanthropic investment company Future Generation. He was appearing alongside former NSW premier Mike Baird.

Gonski said the AICD-commissioned legal opinion gave companies more scope to support programs with community goals, rather than only serving shareholder interests. “I think it is clear that our law allows us to look at stakeholders generally,” Gonski said.

He said this approach could still be consistent with making profits, but it required taking a long-term view.

“You might ask: ‘Well, what happens to profit?’ And I think that the answer to that is that we need to look long-term, which Australia is not very good at.”

Gonski sounded sceptical about the United Kingdom’s more prescriptive laws in this area – which he said added “compulsion” by requiring directors look at all stakeholders’ views. The UK approach was “a little bit difficult,” Gonski said.

Baird, a former National Australia Bank executive, said earlier that NAB’s sponsorship of the Special Olympics was an example of how businesses could contribute to the community in ways that aligned with company strategy. Baird said that sponsorship strengthened the connection that bank staff who volunteered for the event had to NAB.

“All banks, they lost trust, and how do you build that up? Obviously providing good service and looking after customers is one thing, but you’re part of a community and state and country, that has need. So, how do you, in an agile way, and a purposeful way, kind of connect in?”

The opinion from Walker and Ng said the law gave directors “considerable latitude in identifying the best interests of a company and its shareholders,” including the potential impact of reputation risk, which could have a “very real threat to shareholder value.” They said reputational risk could “loom particularly large” in a world where information spread rapidly through digital and social media.

Former NAB chairman Ken Henry also argued for directors to serve more than only shareholders’ interests during his at-times testy 2018 appearance at the banking royal commission. Henry said that by the “strict letter of the law” boards of directors were accountable to shareholders, but added “the public tolerance of that model of accountability has been pretty well eroded to zero.”

Walker and Ng cited the banking royal commission’s final report, in which former High Court judge Kenneth Hayne said the interests of customers and shareholders should not be seen as opposed over the long term.