Three vaccine frontrunners announced promising updates in the past two weeks, with markets rallying in relief that a return to normality might be closer than anticipated. This shift has unleashed one of the biggest rotations out of growth stocks, many of which benefited from the work-from-home economy, into value stocks, which were some of the worst-hit by the pandemic.

Value and real-economy stocks have gained most from the optimism that has underpinned the market so far in November, as investors took profit on some of the big "stay at home stars", such as Zoom, Amazon and Microsoft and put their cash into beaten-down sectors such as airlines, cruiselines and energy companies.

The S&P 500 Value index has risen by 11% so far in November, compared with a near-8% gain in the Growth index.

The clinical trials of a number of promising candidates from the likes of Pfizer, Moderna and AstraZeneca are entering their final stages, meaning a vaccine could be available in weeks, rather than months. This, in turn, is giving the shift into value stocks a greater essence of longevity for a number of investment banks.  JP Morgan Casenove said on Monday the trend has 'legs'.

Now, Deutsche Bank is combing through the stocks universe for decent buying opportunities among European value stocks, which have been so far this year, some of the biggest underperformers.

These are 6 that they just updated. 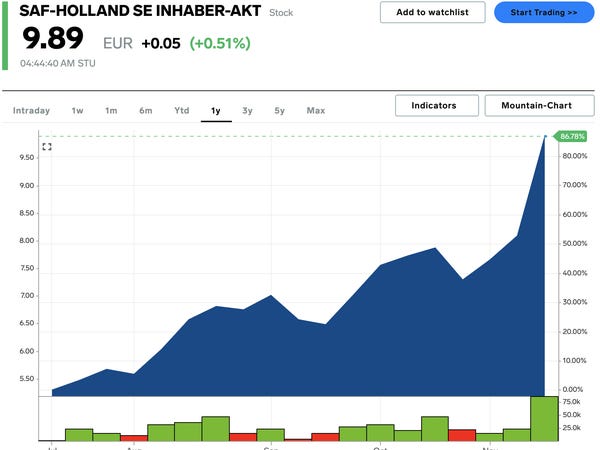 "SAF's full set of Q3 figures confirmed the pre-release and the guidance raise is surely positive, albeit we note that this was already expected to a certain degree. The guidance raise was primarily driven by Europe where the company reported a double-digit margin of 10% driven by a solid aftermarket business paired with a good product mix in the OE segment… During the cc [conference call], management stated that the EMEA region is basically booked out until January, which explains the strong share price reaction. As the share price has already increased by 35% ytd, we view the valuation as full and we remain on the sidelines with a new price target of €11." 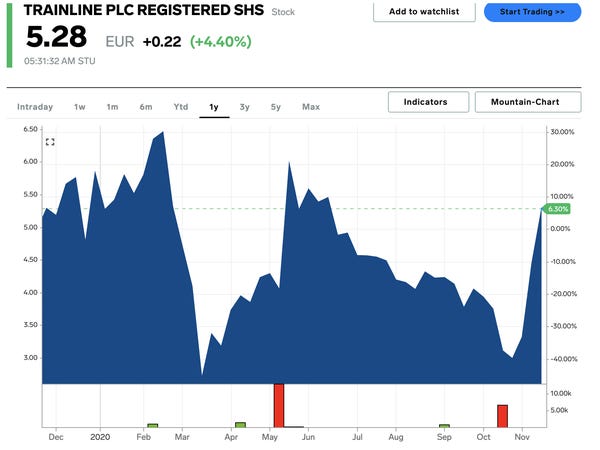 "The medium-term prospects for Trainline look very different from when it announced its interim results on November 5th. Two weeks ago, the UK's market leading Rail/Bus ticket provider was battling with the latest COVID lock-down and facing concerns over the shape of its balance sheet. Now the focus is very much on recovery, and that looks set to be faster than we had expected." 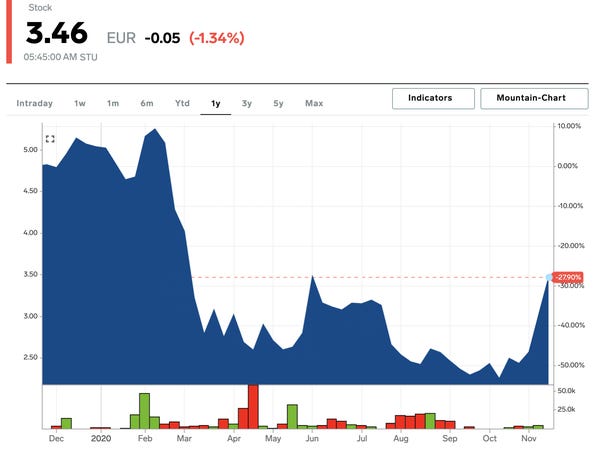 The two recent back-to-back announcements from BBVA confirm Deutsche's "constructive view on the bank," he said.

Firstly, the "sale of the bank's US subsidiary to PNC Financial Services for a full cash consideration of E9.7bn at an attractive valuation of 19.7x 2019 earnings. The transaction will have a positive impact on its fully loaded CET1 ratio of c.300bps, lifting the Group's pro forma fully loaded CET1 ratio to 14.5% as of September, 2020. We adjust our forecasts to exclude contribution from the US subsidiary from 2021 onwards and also incorporate the excess capital-build into our valuation which lifts our TP by c9% to E4.40/sh," he said

"Secondly, the bank also revealed its potential merger negotiations with Sabadell. We run our plug and play merger model and apply synergies and share price premium inputs from CaixaBank and Bankia's merger precedence," he added. 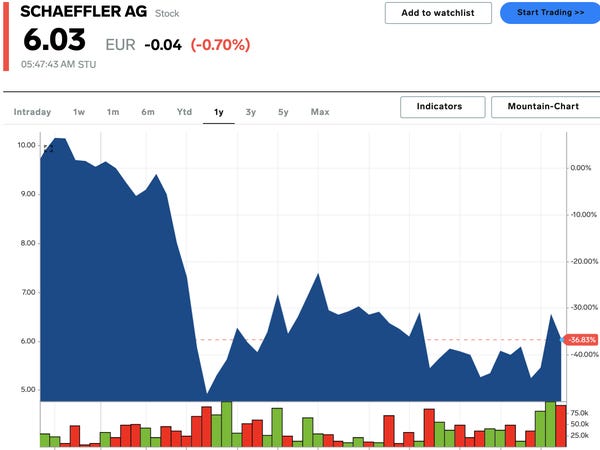 "Targets disappoint at face value but management stresses conservatis. Schaeffler released their new mid term targets post close on the day ahead of their event, but detail on the guidance was only provided at the CMD today. While this should have led to decent attendance of the virtual CMD, it also caused frustration for investors given the lack of detail initially provided for targets, that disappointed at first glance. However, during the CMD, management elaborated on the ambitions and made sure to stress that they are predominantly providing a floor and the company is dedicated to perform ahead of the ranges."

"The company highlighted their strategy to manage the shift towards alternative drivetrains and where it seeks to invest and compete, aside from growth and margin opportunities in Industrial. While we clearly appreciate the effort and clear goals communicated, we note that in Automotive, competition has identified the same fields as growth potential and recently, OEMs like Daimler and GM have announced to produce e-axles in house." 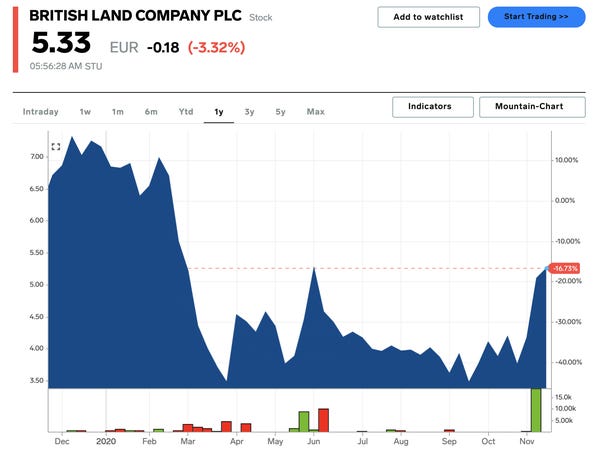 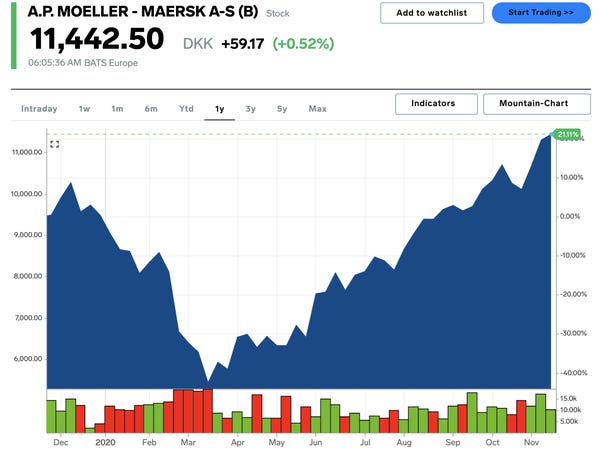 "Tailwinds are accelerating into Q4 and Q4 will be stronger than Q3 which is not the usual seasonality. October volumes at or slightly above last year. Our dbDIG data container data (where we can track port throughput data on a near real time basis) showed October volumes up 1% YoY with November MTD flattish. Capex is still below depreciation and management will maintain strict capital discipline. Management will refrain from adding capacity, they have all ships they need for now (maintain 4m TEUs of capacity). FCF generation is key and capex will be spent on containers (owned vs.leased) and replacement of some smaller vessels in the region 10 to 15k TEU size as chartering these ships is not economic." 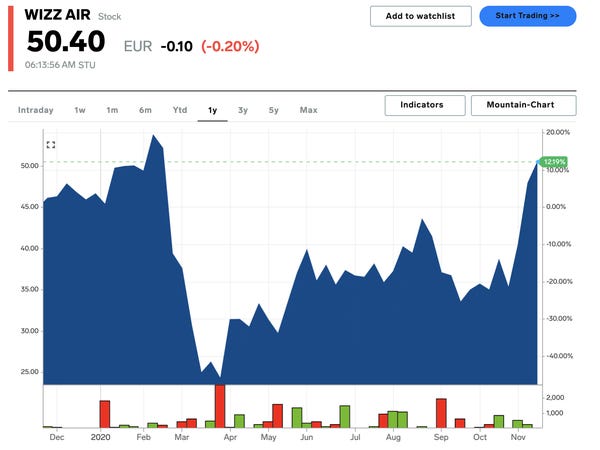 "On the back of the 2Q21 results… and given the extent to which Eastern Europe is currently seeing a greater impact from the second wave of COVID-19 than it did from the first, we have taken a further haircut to our last published capacity, passenger and P&L forecasts for Wizz in its year to March 2021. We now forecast 12m passengers (vs 15m before) and a -€105m EBITDA loss (vs €55m profit before) which compares to current Bloomberg consensus at -€72m."