Home » Deutsche Bank’s nightmare decade is gone but not forgotten

On the day before one of the biggest margin calls in history, Deutsche Bank chief Christian Sewing joined an urgent meeting with a not-unfamiliar message: there was a problem, and billions of dollars were at stake.

But as executives on the late-March call briefed him on the bank’s exposure to Archegos Capital Management, this time it wasn’t all bad news. Risk managers had been concerned by the family office’s rapid growth for some time, and had been collecting additional collateral. And the firm’s traders stood ready to quickly offload the slumping assets. 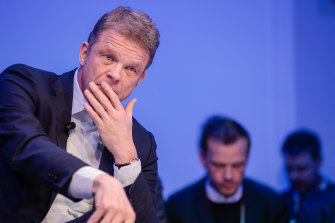 So as Archegos’s collapse slammed rivals with more than $US10 billion ($12.9 billion) of losses, Deutsche Bank walked away without a scratch, reporting its highest profit in seven years. It was enough to stun longtime observers of the firm, which has spent the past decade-and-a-half stumbling from one crisis to the next. The escape added to a growing sense that Sewing may finally be moving Germany’s largest bank past its dysfunction of the last decade.

“What they pulled off is quite impressive in the last couple of years,” said Matthew Fine, a portfolio manager at Third Avenue Management who started investing in Deutsche Bank shares after Sewing was appointed CEO in 2018. “After several failures and years of incredible underperformance and substantial capital raisings, at some point you really have to rip the band aid off, and Sewing seems to have done that.”

Halfway through the CEO’s radical four-year restructuring, the perennial sick man of European finance appears to be on the mend. Its shares have more than doubled from a record low, when the pandemic revived old fears whether Germany’s largest lender was strong enough to survive another crisis. Instead of collapsing under bad loans, Deutsche Bank successfully rode a trading wave that’s buoyed investment banks globally. After years of gloom, some executives inside the Frankfurt headquarters are now even considering deals as they seek to profit from the recent stumbles of rivals.

To be sure, for a bank that lost money in five of the past six years and whose shares remain 87 per cent below their peak, the bar to success is low and blunders remain an ever-present possibility. The stock is still trading at one of the steepest discounts to book value among European lenders. Sewing’s efforts have gotten a boost from factors outside his control, such as the global market rally and extensive government guarantees that kept defaults at bay during the pandemic.

But the CEO, who had initially planned to focus more on corporate banking and cut back trading even more, was quick to adapt when markets moved against him just weeks after he announced his plan. At home, he’s confronted the reality that in order to make money in an overbanked country with negative interest rates, he needs to raise fees and slash jobs, even at the risk of upsetting clients and unions.

Above all, however, the former risk manager has made progress dealing with internal issues that had undermined his predecessors. He ended the divisional infighting that Sewing once called “Deutsche Bank’s disease,” and he addressed risk lapses that had caused the bank, over and over again, to shoot itself in the foot.

Archegos wasn’t the first blowup that Deutsche Bank sidestepped under Sewing. The bank last year avoided taking a potentially damaging financial and reputational hit from the collapse of payments firm Wirecard, having cut its exposure as doubts about the company’s business grew. It also hasn’t taken a direct hit from Greensill Capital, the supply-chain finance firm whose demise forced Credit Suisse Group to liquidate a $US10 billion group of funds.

Of all those pitfalls, Archegos had by far the biggest potential to do lasting damage to the green shoots of Sewing’s turnaround. Deutsche Bank had joined several other investment banks in dealing with the family office of Bill Hwang, who was barred from the investment advisory industry after pleading guilty to wire fraud on behalf of his shuttered hedge fund in 2012. Many firms had been willing to accept more risk in return for the hefty fees Archegos provided. Credit Suisse, for instance, allowed it to borrow up to ten times the value of its collateral. The Swiss bank ended up with some $US5.5 billion in losses, the most of any firm.

Deutsche Bank had run up an exposure worth several billions of dollars, according to people familiar with the matter. But it hadn’t lent as aggressively and its arrangement with Archegos allowed it to ask for more collateral to back up what looked like an increasingly imbalanced house of cards.

The bank, which was conducting daily analyses of Archegos’s holdings, had noticed already in February that concentration risk was rising. In early March, it started to request more collateral, the people said, asking for anonymity discussing internal information.

By March 24, when Lewis explained the situation to Sewing in that phone call, he told the CEO that the bank’s internal models were pointing to relatively minor potential losses. Still, that didn’t prevent some heightened nerves in the firm’s ranks over the next two days as Archegos was found in default and a standstill agreement that some lenders had tried to broker fell apart.

When it became clear on Friday that rivals were cutting their lifelines and getting out, Lewis got on a 20-minute call with his team, and the bank decided to liquidate. The firm’s traders sold most of the positions that Friday to multiple buyers including Marshall Wace, one of Europe’s largest hedge fund managers. The bank used direct sales, aiming to avoid spooking the markets. Within a few days, it recovered all of its money and even had some collateral left. 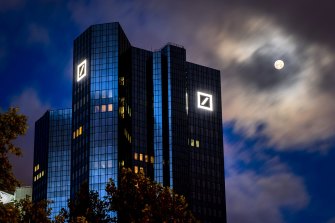 Among the 25 biggest banks in the world, Deutsche Bank was the only one to have a net loss over the past 10 years, while many rivals racked up more than $US100 billion of profits.Credit:AP

Navigating minefields without a hit is a new experience at a lender that over the prior decades had developed a reputation for putting quick profits and bonuses before the interests of clients, let alone the broader public. When the world stepped up scrutiny of the industry in the wake of the 2008 financial crisis, Deutsche Bank ended up footing the biggest legal bill of any European bank, spending more than $US19.4 billion on fines and settlements.

Its lost decade stood out even in a post-crisis period that was tough for many European lenders. Among the 25 biggest banks in the world, it was the only one to have a net loss over the past 10 years, while many rivals racked up more than $US100 billion of profits.

The CEO early in his tenure made it a top priority to rein in the conflicts between the various businesses — and their executives — to combat the internecine warfare that had plagued many of his predecessors. After inheriting a bank that had unceremoniously dumped former CEO John Cryan and seen open revolt across the management board, Sewing moved quickly to consolidate power. Out were those of questionable loyalty, often replaced by internal confidantes with whom he’d risen through the ranks.

Both Deutsche Bank and its crosstown rival Commerzbank have embarked on aggressive cuts to their branch network and staff. Between the two lenders, some 650 locations and 28,000 jobs are being cut.

“The years since the financial crisis have really been a lost decade for investors in German banks,” said Florian von Hardenberg, a UBS banker who advises German lenders on acquisitions and other strategic questions. “But the new restructuring plans have more ambition than previous ones, and they’ve worked through their legacy issues. For the first time in a long time, they actually have a chance to achieve a healthy level of profitability.”

Sewing is a proponent of consolidation, though he has ruled out a transaction in which Deutsche Bank would be the junior partner. But after the bank’s share price recovered, transformational deals are becoming conceivable for top management, people familiar with the matter said. Credit Suisse has recently come up as one option in internal talks, they said.

Deutsche Bank could also revive merger talks with Commerzbank. The two held talks in 2019 at the urging of the government, but decided to focus on their respective restructurings instead.

For Sewing, that decision has worked well so far. Finding a cure for Deutsche Bank’s disease has kept his turnaround plan on track. Ultimately, though, he’ll have to come up with one for the ills plaguing German — and, by extension, European — banking.

“Deutsche Bank has managed a remarkable turnaround in the past quarters,” said Andreas Dombret, a former top official at the German central bank who used to supervise the lender. “Now it’s about making sure that is sustainable.″⁣

Start the day with major stories, exclusive coverage and expert opinion from our leading business journalists delivered to your inbox. Sign up here.