(Note: The author of this fundamental analysis is a financial writer and portfolio manager. He and his clients own shares of DIS.)

The Walt Disney Co. (DIS) stock is breaking out of a three-year period of consolidation. Based on a technical analysis, the stock may be about to surge by roughly 7% to its previous all-time high of $122 from its current price of around $114. Shares have been a market laggard over the past three years, falling by nearly 4%, badly trailing the S&P 500’s rise of almost 36%.

Shares are breaking out on news that rival Comcast Corp. (CMCSA) would no longer be pursuing the hotly contested assets that Twenty-First Century Fox Inc. (FOX) had put up for sale. It leaves Disney the winner and investors dreaming about the big opportunities that lie ahead for Disney’s streaming media service, which is set to launch in 2019. Shares of Disney have increased by more than 15% since the beginning of May when they were trading around $98. Investors had already been anticipating a healthy year of earnings growth from Disney. The addition of Fox’s asset should help to strengthen that outlook.

Disney stock had traded sideways for nearly three years, after peaking around $122 on Aug. 4, 2015. The series of lower highs and higher lows created a technical pattern known as a symmetrical triangle, a bullish continuation pattern. With the stock rising above the multiyear downtrend, shares may be on the rise, reaching its previous all-time highs around $122 and an increase of about 7%. The stock’s advance has come on an increasing level of volume in recent days, a sign more buyers are moving into the shares. 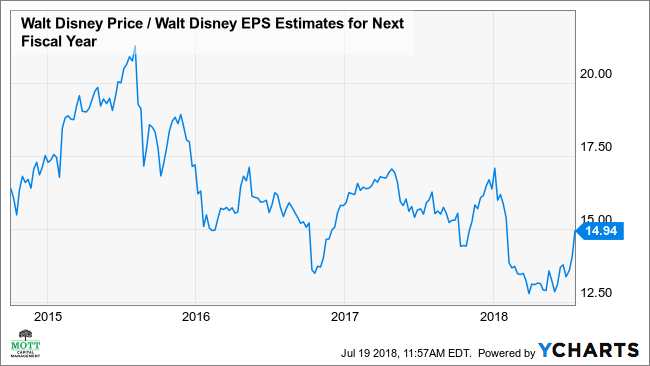 The stock currently trades at just 15 times 2019 earnings estimates, which puts it at the lower end of its historical range over the past four years.

The addition of the Fox assets may be a big positive for the stock. Should the newly acquired assets help to give the planned streaming media product a big boost, the stock may have much further to rise over the longer term.

Michael Kramer is the founder of Mott Capital Management LLC, a registered investment adviser, and the manager of the company’s actively managed, long-only Thematic Growth Portfolio. Kramer typically buys and holds stocks for a duration of three to five years. Click here for Kramer’s bio and his portfolio’s holdings. Information presented is for educational purposes only and does not intend to make an offer or solicitation for the sale or purchase of any specific securities, investments, or investment strategies. Investments involve risk and unless otherwise stated, are not guaranteed. Be sure to first consult with a qualified financial adviser and/or tax professional before implementing any strategy discussed herein. Upon request, the advisor will provide a list of all recommendations made during the past twelve months. Past performance is not indicative of future performance.