The dollar fell and Treasury yields edged lower after President Donald Trump said he disagreed with Fed policy on interest rates and objected to a strong dollar.

The dollar index was lower on the day, erasing a gain that had taken it to a fresh one-year high of 95.65 earlier Thursday. It was down about a half percent since Trump’s comments to CNBC were reported just after 1 p.m. ET.

Trump spoke to CNBC’s Joe Kernen on Thursday in an interview, a portion of which was broadcast. The interview will air in full on Friday starting at 6 am.

The dollar has been rising this week following comments from Fed Chairman Jerome Powell that the economy was strong and the Fed would keep raising rates.

Trump, in the interview, called Powell a “very good man,” but said he was not happy about interest rates going up. He also said he would not tell the Fed what to do.

“I’m not thrilled,” Trump told Kernen. “Because we go up and every time you go up they want to raise rates again. I don’t really — I am not happy about it. But at the same time I’m letting them do what they feel is best.” 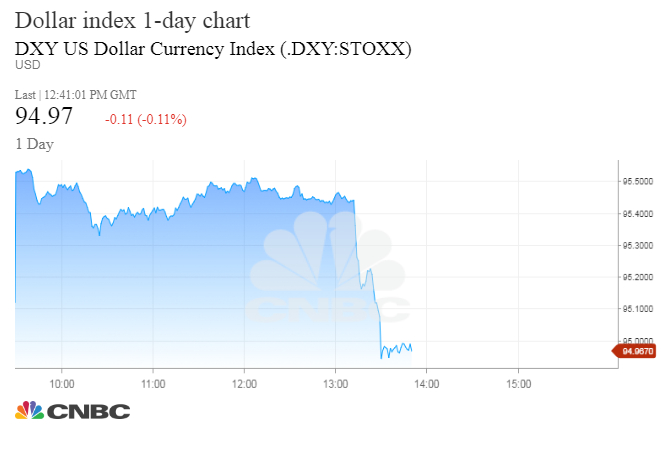 The 2-year Treasury was at 2.58 percent, slightly lower than where it was when Trump made the comment, but it was well off its high of the day, 2.63, a 10-year high. The 10-year yield dipped temporarily to 2.83 percent after the interview, and was trading at 2.84 percent.

“The market of course has had a knee-jerk reaction, but I don’t think this affects peoples’ views on the Fed,” said Marc Chandler, head of foreign exchange strategy at Brown Brothers Harriman.

Chandler said Trump clearly does not plan to interfere with the Fed. “How does a president control the Fed? Through the power of appointments,” he said.

The dollar is not likely to see any more impact from Trump’s comment, Chandler said. He also said the dollar is not benefiting from the worries about trade wars that have slammed on other currencies as much as it is reacting to Fed policy.

“I’d say the bullish dollar was there even before trade tensions rose. I think it’s the policy mix and Fed tightening. It remains even if we have these trade tensions,” he said.

The president has criticized Federal Reserve policy in the past, as a candidate, and he has also voiced his concern about the strength of the dollar. His criticism of the Fed was largely aimed at former Fed Chair Janet Yellen during the election.

Trump has commented on dollar strength in the past. One of those times was as president-elect, when he gave an interview to The Wall Street Journal just before the inauguration, saying the dollar was too strong. He also pointed to its strength against the Chinese yuan as a concern, and at the time the dollar moved lower.

The dollar earlier Thursday hit a one-year high against the Chinese yuan, which has been falling amid worries about trade wars. The dollar itself has been given a boost against many currencies because of the Fed’s policies but also the idea that the U.S. economy is doing better and other economies could take a bigger hit from trade battles.

Presidents in recent history have refrained from talking the currency up or down, but Trump has changed that. Prior to his election, going back to Robert Rubin, President Bill Clinton’s Treasury secretary, the policy has been for a strong dollar. Even when the dollar’s strength created headwinds, administrations have stood by it, at least verbally.