The board purge follows the sudden resignation of chief executive Alex Hutchison, who this week hired a strategic communications firm to release a statement blaming a “calculated smear campaign” for his demise while highlighting his career achievements. 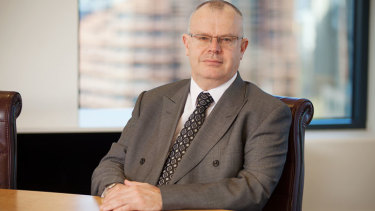 EISS chair Warren Mundy has resigned from the super fund as it reels from an expenses crisis.

A spokesman for EISS confirmed the resignations of chairman Warren Mundy and senior director Michael Roche but declined to release a statement other than to say the fund’s operations would continue. Dr Mundy and Mr Roche did not respond to direct requests for comment.

EISS, which manages $6 billion for about 20,000 members largely in the energy sector, was revealed last week to have a number of questionable sponsorship deals, including some linked to executives’ families and two Maroubra Surf Life Saving Clubs, located less than 5 kilometres from Mr Hutchison’s family home.

The fund has maintained all sponsorship deals are compliant with the law and were subject to rigorous scrutiny. However, since the federal government introduced stricter laws for super fund spending in July, EISS has not signed any new sponsorship agreements.

Mr Hutchison’s statement this week said these deals and community engagement were integral to growing the fund’s membership base but did not touch on allegations raised by a number of staff about a “toxic” corporate culture under his leadership.

This masthead also revealed last week EISS Super was forced to hire external solicitors WorkDynamic to probe bullying complaints after the fund’s former general manager of people and culture Lisa Elias made a formal complaint. Ultimately, the WorkDynamic report found many claims to be unsubstantiated but insiders say the investigation was not comprehensive.

Acting chief executive Lance Foster told staff in an internal call this week they should report instances of bullying to senior management, adding that EISS had been a “great place to work”, according to multiple people familiar with the call.

Dr Mundy, who joined the EISS board in 2017, has defended the fund’s approach to spending members’ money in a series of internal emails last week, obtained by The Age and Herald, as well as Mr Hutchison’s role at the fund.

“It has been a pleasure working with Alex during my time at the fund which I’m sure is a sentiment shared by many of you,” one of the emails said. “Since joining the fund in 2012, Alex has built a strong team and has done amazing things for members.”

Dr Mundy sat on EISS’s audit, compliance and investments committee and held a number of board positions including major power transmission company Transgrid, which has many current and former staff whose super is with a major employer for EISS. He also held several backroom roles on Labor Party committees.

Mr Roche was the trustee director of EISS Super, and similarly quietly resigned this week, cutting short his contract. He is also a non-executive director for banking giant Macquarie Group and Wesfarmers.

The fund’s website was updated to show both senior employees as former directors. The resignations come as Liberal MP Tim Wilson this week said he would call EISS’s senior management before an economics committee to grill the fund’s expenses.

The executive overhaul also comes at a critical juncture for EISS’s merger plans with another fund TWUSUPER. A source familiar with the transport super fund’s thinking had said it would not go ahead with the merger if Mr Hutchison were to run the new entity.

A spokesman for TWUSUPER said on Thursday it had entered the merger negotiations because it would help members of both funds benefit from greater scale and give EISS members access to its investment performance.

“TWUSUPER is closely monitoring developments at EISS and will now assess the practical ramifications of changes in its board governance,” the spokesman said.