New York (CNN Businees)The Federal Reserve finally seems prepared to whip inflation. The last time the Fed faced surging prices like this, it jacked up interest rates and the US economy endured multiple slowdowns. Do Americans need to fear a repeat of the early 1980s?

Many investors and economists worry that the Fed may prematurely declare the war on inflation to be over, especially since Fed chair Jerome Powell made it painfully clear Wednesday after the Fed raised rates by a half of a percentage point that the central bank is not going to raise rates too aggressively.
Stocks plunged Thursday, wiping out Wednesday’s gains. Investors seem worried about the impact that the Fed’s plans to unwind the Treasury bonds and mortgage-backed securities on its portfolio will have on long-term rates, the market and economy. Concerns about tech stock valuations also weighed on sentiment.

But Powell also essentially ruled out the chances of a hike bigger than a half-point at any given time. Prior to Wednesday’s meeting, investors were starting to price in a strong chance of a three-quarter point, or 75 basis point, hike. The Fed hasn’t raised rates by that large an amount since 1994.

Some economists and market strategists now worry that a brief recession is inevitable because of these first few rate hikes. But if the Fed takes a victory lap too soon and slows the pace of future rate increases, the risk is that inflation could come roaring back and lead to another longer and deeper downturn.

That’s the dreaded double-dip recession scenario. In 1980, the economy had a short recession that lasted just six months, followed by a 16-month downturn that stretched from the summer of 1981 through the fall of 1982.

“A double-dip recession is a possibility if the Fed is too scared to really get inflation under control,” said Seema Shah, chief global strategist with Principal Global Investors.
“The Fed needs to do something drastic. If they take their foot off the brake too quickly, then there is every chance of inflation taking off again. The early 1980s period becomes the obvious comparison,” she added. 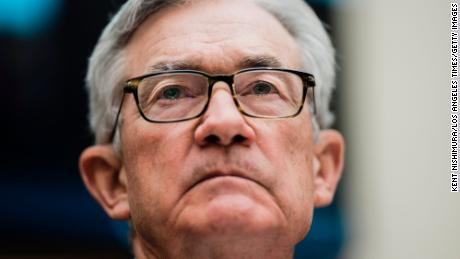 Powell, speaking to reporters after the Fed’s rate hike Wednesday, expressed confidence that the central bank can engineer a so-called soft (or “softish” to use his term) landing for the economy. That means that rate hikes may slow, but not totally derail economic growth.
Experts are skeptical.
“A hard landing is a definite possibility and we should prepare for that,” said Daniel Dolan, founder and managing member of Dolan McEniry. “A double-dip is on the table.”
The Fed will also need to stress patience to investors and consumers. Even if it seems like inflation is starting to come under control in the short-term, it will take several months before the Fed’s rate hikes truly start to impact prices and consumer spending.
“Monetary policy is an extremely blunt instrument but it will still take some time to see how the rate hikes play out,” said John Leer, chief economist at Morning Consult. “It’s one thing to see what rate increases do to stocks but it’s another to see how this trickles down to the broader economy.”

If the Fed errs on the side of caution and raises rates over a longer period of time, that will undoubtedly slow the economy.
But it also increases the chance that a recession could be shallow and short because bigger rate hikes probably will do what the Fed wants: choke off inflation until price increases retreat to a more normal and manageable 2 to 3% annual range.

3 reasons why Deutsche Bank is forecasting a recession

The fear is that the Fed may prematurely halt its rate hikes because it feels that slowing the inflation rate to about 3% to 4% is enough to keep the economy afloat. But that’s actually what experts think could lead to a deeper downturn.
“The double-dip is something we have to think of as a potential scenario. There is no question about it,” said Dean Smith, chief strategist with FolioBeyond, an investment firm that manages the Rising Rates ETF.
“Where is this confidence coming from about fighting inflation? There is no evidence that the Fed can that finely manage things,” he added. “Inflation is not under control. The only way to fix it is to raise rates until it hurts.”
Still, some hope that the Fed will be able to thread the proverbial needle and engineer a soft landing. Powell has won praise from Wall Street for being painstakingly clear about what the Fed will and won’t do. So there should be no mystery about future interest rate hikes.

“There is an opportunity for the Fed to execute a soft landing,” said Mona Mahajan, senior investment strategist with Edward Jones.
“But the Fed will have to move aggressively and the economy hasn’t dealt with this rapid a move in rates in awhile. It will be interesting to see if anything cracks,” she added.
Source: Read Full Article