London (CNN Business)The Federal Reserve is finally getting aggressive in its bid to fight decades-high inflation.

What’s happening: The central bank is expected to hike interest rates by half a percentage point on Wednesday for the first time since 2000. Investors think it will deliver hikes of the same magnitude in June and July.
But arriving late to the scene will have consequences.

Boosting rates just as growth starts slowing comes with a heightened risk of cooling activity so much it triggers a recession. And in just a few months, the Fed may pay the price for playing catch-up.

Breaking it down: The Fed knows it needs to act decisively to keep inflation expectations from getting out of hand and to protect its credibility.
In March 2021, the central bank predicted median inflation in 2022 of just 2%. Fast forward one year, and the central bank’s preferred measure of tracking consumer prices put inflation at 6.6%, the highest level in 40 years.

“We are late, late, late,” said Pascal Blanqué, chairman of the Amundi Institute.
But getting tough right now won’t be a clear fix for the problem. While raising interest rates sends an important signal, it typically takes 12 to 18 months for the impact of such a move to feed through to the economy.
Plus, while hiking rates can help put a lid on hot demand, it won’t do anything to tackle the supply chain issues that have been a key driver of higher prices.
Meanwhile, the recovery from the pandemic is losing steam. Consumer spending is still strong, but news that the US economy shrank in the first three months of 2022 surprised economists.
Elevated energy prices pose a big risk to consumption in the coming quarters, and a slowdown of activity in Europe and China could have global ramifications.
All this means that later this year, the Fed could find itself in a bind once again. Fed Chair Jerome Powell will face another conundrum: Should the central bank keep hiking interest rates to address inflation even if it tips the economy into recession, like Paul Volcker did in the early 1980s?
While Powell has expressed admiration for Volcker, both Menuet and Blanqué think it’s unlikely that the Fed’s current leader will channel his tactics for long. Since the 2008 financial crisis, the world has gotten very used to cheap money. That — plus the Fed’s delay in starting to hike — will make it harder for the central bank to stay the course.
“I think it’s probably going to be a case of short and sharp,” Menuet said, referring to the Fed’s tightening cycle.
Watch this space: The market expects the Fed to hike rates at every meeting for the rest of the year, achieving a main interest rate of more than 3% by the end of the 2022. If the Fed decides to prioritize normalizing interest rates over potential economic fallout, that’s certainly possible.
But analysts at the Wells Fargo Investment Institute note that over time, interest rates have topped out at progressively lower levels. In 2006, they peaked at 5.25%, while in 2018, they only got as high as 2.5%. This time? Well, that depends on how long the Fed thinks it needs to compensate for its miscalculation on inflation.

The European Union is proposing to ban all oil imports from Russia and remove the country’s biggest bank, Sberbank, from the SWIFT international payments network. 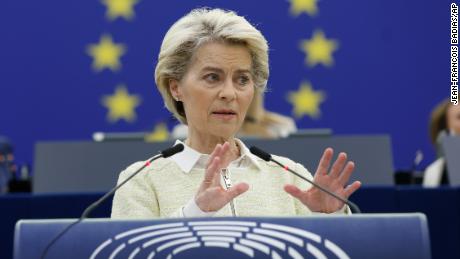 The latest: European Commission President Ursula von der Leyen said Wednesday the measures would form part of a sixth round of sanctions against Russia over its invasion of Ukraine, my CNN Business colleague Mark Thompson reports.
“We now propose a ban on Russian oil,” she said during a speech to the European Parliament. “Let’s be clear: it will not be easy. But we simply have to work on it. We will make sure that we phase out Russian oil in an orderly fashion, to maximize pressure on Russia, while minimizing the impact on our own economies.”
Crude oil supply would be phased out within six months, and imports of refined oil products by the end of 2022, she added.
News of the proposal, which still needs the approval of all EU member states, boosted crude oil prices. Last year, Russia accounted for about 27% of EU oil imports. The bloc will need to find supply elsewhere at a time when the market is already strained.
Market reaction: Brent futures, the global benchmark, rose more than 4% to above $109 a barrel, while US oil futures climbed above $106.80.
Oil prices have risen by about 40% since the start of the year on fears that Russia’s invasion of Ukraine will deliver a supply shock, fueling inflation and piling pressure on European economies.
EU countries have already agreed to phase out Russian coal imports but the bloc has found it much harder to reach consensus on oil sanctions despite weeks of talks.
But it’s not a done deal yet. Hungary recently reiterated its opposition to an oil embargo, and Slovakia is reportedly seeking an exemption.

There are a record number of open jobs in America

Want another sign that the Federal Reserve is in a tight spot? Just look at the latest data on US job openings, which hit a record high in March.
The United States had 11.5 million open positions that month, the highest level since the Bureau of Labor Statistics started keeping track in 2000. The number of Americans who quit their jobs also hit an all-time high of 4.5 million.
On one hand, the data is a sign that the Federal Reserve has been effective in its aim of keeping policy loose to support the job market’s recovery from the pandemic, even as it overlooked inflation. Companies are creating hundreds of thousands of jobs each month, and people who want better pay or working conditions are finding it easy to switch from one role to another.
“Workers continue to quit and get hired at fast rates in today’s economy,” said Elise Gould, senior economist at the progressive Economic Policy Institute. “This ‘churn’ is a positive sign of a strengthening labor market where workers can quit, search and obtain new opportunities.”
But the massive number of job openings has also become part of the problem.
Employers need to pay more to find the workers they need, raising their costs. They then hike prices to maintain their margins — which in turn compels workers to ask for even higher wages to cover their expenses, creating a vicious cycle known as the “wage-price spiral” that policymakers are desperate to avoid.