Former Reserve Bank governor Glenn Stevens will be the next chair of Macquarie Group, replacing current chairman Peter Warne from May next year.

Mr Stevens, who was governor of the RBA between 2006 and 2016, was on Thursday appointed as the next chair of Macquarie as its board adjusts to the retirement of Mr Warne, with another director Diane Grady also announcing her retirement. 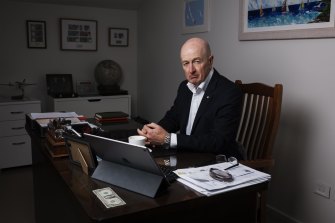 Glenn Stevens was the was governor of the RBA between 2006 and 2016.Credit:James Brickwood

Mr Stevens, who has been on Macquarie’s board for four years, will be chairman of both Macquarie Group and its banking business, Macquarie Bank.

The former RBA governor said Mr Warne – who had flagged his retirement previously – was highly respected in the business community and had chaired the bank during a successful period in Macquarie’s history, including appointing Shemara Wikramanayake as chief executive.

“I’m honoured to have been asked by my colleagues to follow in Peter’s footsteps and look forward to working with the boards, Shemara and the entire Macquarie team in the continued effort to meet client, investor, regulatory and community expectations,” Mr Stevens said.

Mr Warne has chaired Macquarie since 2016, and he highlighted the bank’s strong growth in recent years against varied market conditions, including the hit from COVID-19. He pointed to Mr Stevens’ experience in central banking, which included working for 20 years in senior positions at the RBA, and being involved in international regulatory groups.

“I am pleased that the boards have selected Mr Stevens as the next chair, with his deep expertise in markets and economics after many years as a successful governor of the Reserve Bank of Australia,” Mr Warne said.

Ms Grady, who also announced her retirement from Macquarie’s board on Thursday, will step down as a director in February after serving for more than ten years as a director.

Macquarie shares closed at $196.69 on Wednesday, and have jumped by about 40 per cent in the last year.