The company at the centre of an alleged $400 million fraud against Westpac is looking for new customers and spruiking its services following an emergency sale to the cousin of colourful football personality Bill Papas.

Forum Group, the employing entity for Mr Papas’s Forum Finance, was sold from administration last week to Mr Papas’ cousin Eric Constantinidis, who previously had no involvement in the business.

The Sydney-based Forum Group company, a part of the wider Forum empire that sells technology and other products to small businesses, has sent six emails to prospective clients over the past two weeks to drum up new business. 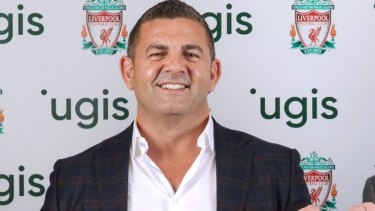 The emails spruiking Forum’s businesses were sent at a time when the company was going through mass layoffs and staff say they were stressed and owed large sums of money.

The most recent email sent last Friday, obtained by The Age and Sydney Morning Herald, offers to conduct site visits to examine how Forum could assist prospective clients to embark on a “digital transformation” using cloud-based technology.

“I’d love to have one of our office solution experts come out to see you and talk about the challenges your business is facing and the ways in which Forum can help make your business better,” the email says.

“Do you have a spare 30 minutes in the next week or so to have a chat about upgrading your office? Look forward to hearing from you.”

Earlier emails share information about the rising threat of data breaches and importance of cyber security and link to blog articles published on the Forum Group website, some of which have since been removed.

Ms Haskett did not respond to requests for comment.

Forum Group’s website has remained live since Westpac accused the company of being involved in a $400 million-plus fraud. The website initially included a positive review from a Sydney concrete company, which was later removed after that company’s founders engaged lawyers.

A source from the concrete company, who declined to be named, said Forum had not sought his permission to use his business’ name on the website and while the service had been “professional” he did not want to be associated with the fraud allegations.

Mr Papas told a racing publication in April this year that he and his cousin Mr Constantinidis had previously started their amateur racing careers in road registered Porsches. Mr Constantinidis is also a keen racing fan.

This masthead has revealed Mr Papas’ extensive international and domestic assets, including Audi racecars and Greek seaside properties. Mr Papas, who was supposed to return to Australia to face the courts earlier this month, remains in Greece after his lawyer told the Federal Court he had contracted COVID-19.

Meanwhile, a report filed by liquidators at McGrathNicol shows the firm has managed to conduct brief interviews with Mr Papas and his business partner Mr Tesoriero since being appointed as liquidators to the group.

According to documents filed with the regulator, McGrathNicol’s partners Jason Preston and Jason Ireland say they: “Spoke separately to both directors of Forum Finance, Basile Papadimitriou and Vincenzo Tesoriero”.

Forum Group and Mr Constantinidis did not respond to requests for comment.