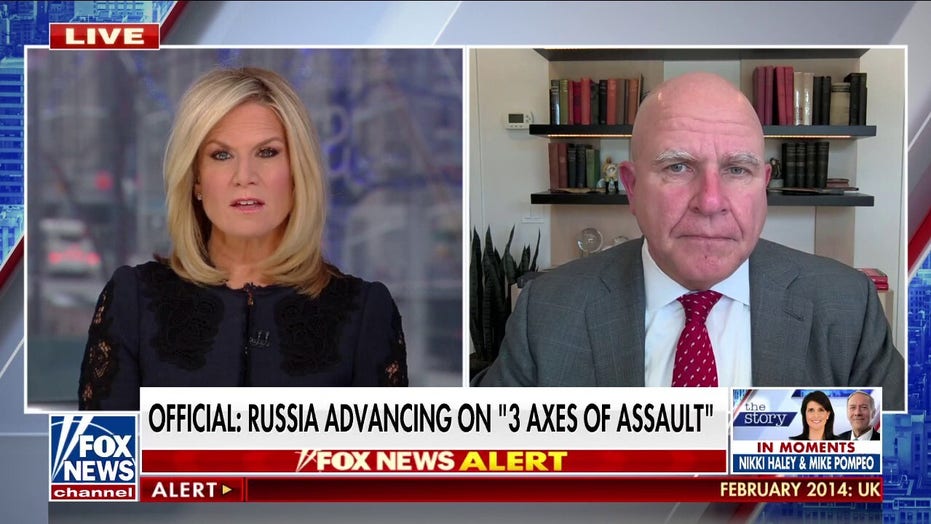 This could be the beginning of the end for Putin: H.R. McMaster

Former national security adviser argues the U.S. has ‘not done enough’ to aid Ukraine against Russia.

Most voters are concerned about the situation between Russia and Ukraine — and think what happens there matters here at home, according to a Fox News survey completed before Russian President Vladimir Putin launched an attack on Ukraine overnight Wednesday.

The survey finds 56% feel President Biden has not been tough enough on Russia.  Few (8%) say he’s been too tough, while 29% think his handling is about right. 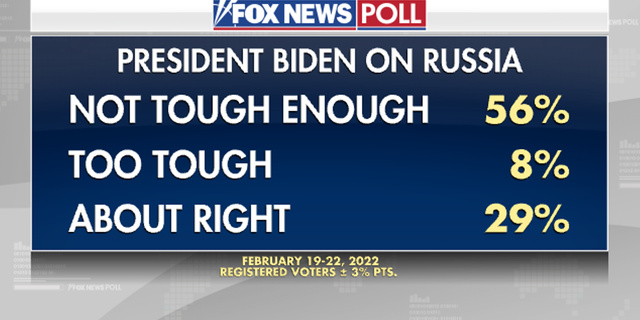 For comparison, that’s close to the assessment of former President Trump on the same question nearly four years ago: 53% said he wasn’t tough enough on Russia, 5% said too tough, and 35% about right (July 2018).

Forty-two percent of Democrats join 52% of independents and 72% of Republicans in wanting Biden to be tougher.  Nearly half of Democrats, 47%, say the president’s actions are about right.

Two-thirds (66%) of voters are concerned about the Russia-Ukraine situation, and three-quarters think what happens in Ukraine matters a great deal (35%) or some (42%) to life in the United States.  The poll shows a rare bit of partisan agreement, as at least 7 in 10 voters in every demographic group think the conflict makes a difference at home.  Moreover, about one-third of every group thinks it matters a great deal. 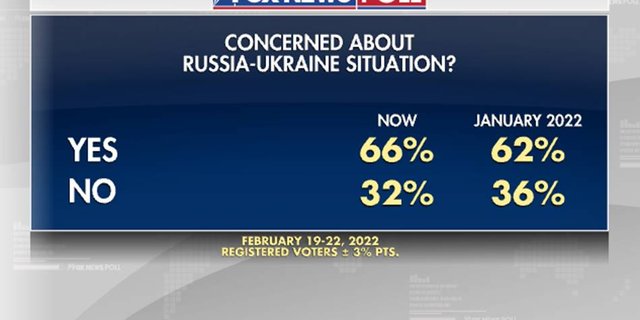 More Democrats (77%) are worried about the Russia-Ukraine situation than Republicans (61%) or independents (53%). 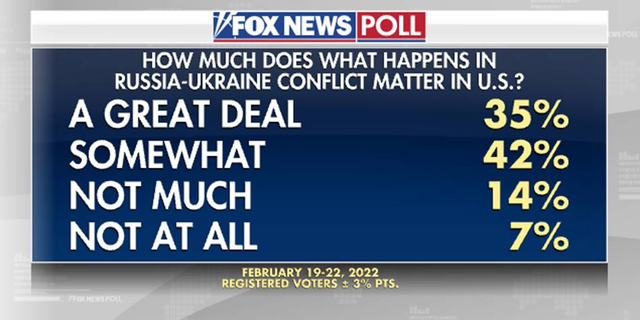 Biden’s job rating on foreign policy stands at 38% approval versus 58% disapproval. Those marks are better than he receives on immigration, crime, and the economy, and worse than on climate change and the pandemic.

Overall, 9% have a favorable opinion of Putin.  Most voters, 82%, view him negatively.

However, Democrats (76%) are far more likely than independents (54%) and Republicans (59%) to hold “strongly” unfavorable views of the Russian leader. 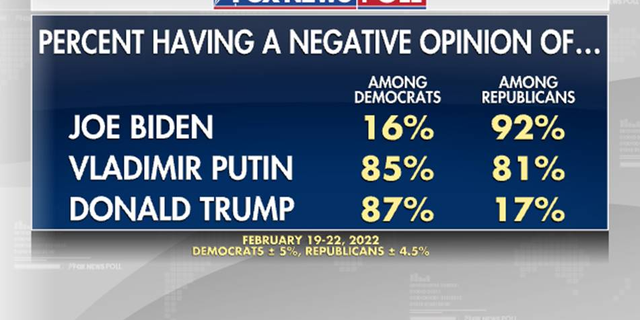 Among all voters, Trump’s favorable rating comes in at 45%, a bit higher than Biden’s 43% favorable.

Conducted Feb. 19-22, 2022 under the joint direction of Beacon Research (D) and Shaw & Company Research (R), this Fox News Poll includes interviews with 1,001 registered voters nationwide who were randomly selected from a national voter file and spoke with live interviewers on both landlines and cellphones. The total sample has a margin of sampling error of plus or minus three percentage points.