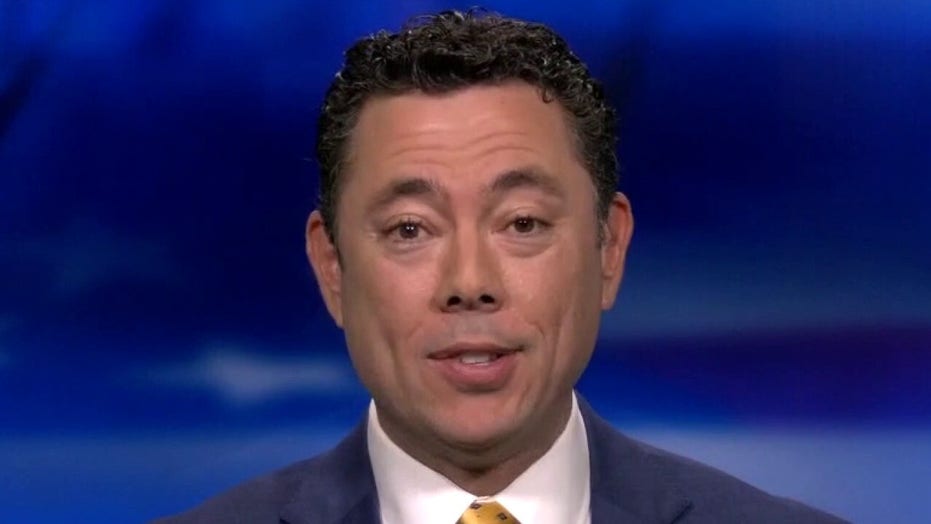 Chaffetz blasts return of earmarks: ‘The Federal government is not supposed to be funding all of these things’

By a 60-34 percent margin, American voters distrust the federal government, and that is about where sentiment has stood for more than a decade.

A majority of 54 percent trusted the government when the Fox News Poll first asked the question during George W. Bush’s presidency in 2002.  That was fairly soon after September 11, so that number reflected a national rallying of sentiment around those attacks.

The question has been asked on and off again since 2002, and for the most part the share of voters trusting Uncle Sam has stayed between 32-37 percent — with two exceptions.  Trust was in the low forties twice during former President Barack Obama’s time in office. It was 41 percent early in his first term, February 2009, then hit 42 percent in October 2012, right before his reelection (up from 33 percent the previous July). 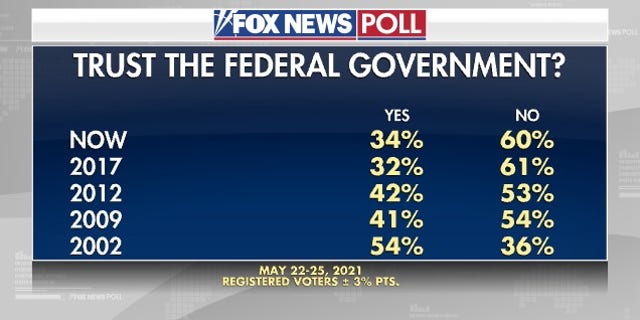 Partisanship is a big driver on trustworthiness.  Among Republicans, 63 percent had faith in the government during Bush’s presidency in 2002.  That dropped to 32 percent early in Obama’s presidency in 2009 — and stands at just 16 percent today.

Among Democrats, 55 percent trust the government now, up from 42 percent in 2017 during former President Donald Trump’s first year in office.  Current trust among Democrats is about the same as it was early in Obama’s presidency: 53 percent in February 2009. 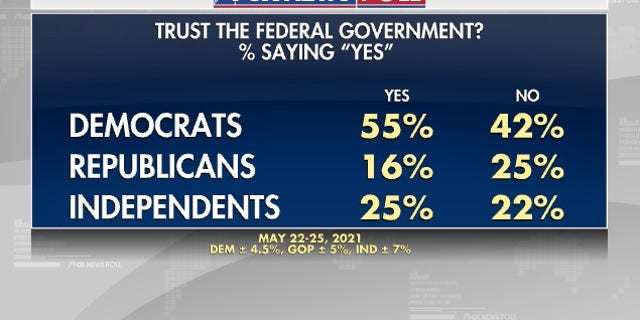 Twenty-five percent of independents have faith in the government, mostly unchanged from 22 percent in 2017.

Conducted May 22-25, 2021 under the joint direction of Beacon Research (D) and Shaw & Company (R), this Fox News Poll includes interviews with 1,003 randomly chosen registered voters nationwide who spoke with live interviewers on both landlines and cellphones.  The total sample has a margin of sampling error of plus or minus three percentage points.