The Insurance Council of Australia (ICA) has declared an insurance catastrophe after more than 5000 claims were lodged over the weekend following extreme rain and flooding across Sydney and broader New South Wales. 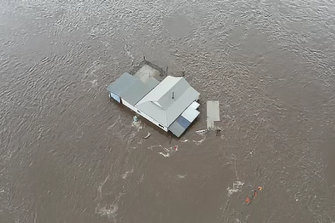 An insurance catastrophe has been declared. Credit:

The ICA’s catastrophe declaration seeks to speed up the insurance industry’s response for affected policyholders, delivering direct assistance to the worst-affected.

The ICA added that insurers will continue to monitor the situation in south-east Queensland to determine if a similar declaration is required for that area.

“As many areas are currently inaccessible due to floodwater, insurers are expecting further claims in coming days as emergency services allow residents to return to their properties to examine the extent of their damage and losses,” ICA chief executive Andrew Hall said.

The Insurance Australia Group (IAG), which owns brands including NRMA and CGU, reported it had received more than 2100 claims as of Sunday evening but added it was too early to accurately determine the net cost of the flooding and storms to the company’s bottom line.

The group has a maximum event retention – the maximum cost which can be incurred after breaching its reinsurance cover – of $169 million or $135 million for a second event.

IAG chief executive Nick Hawkins said claims teams will be dispatched as soon as it is safe to access impacted areas, but customers can access immediate help, including emergency accommodation, sooner.

“We now have additional resources in place to help our customers get back on their feet and we encourage customers to contact us to lodge their claim as soon as possible so we can organise immediate assistance,” Mr Hawkins said.

Meanwhile, Mr Guse said insurance companies update topographical maps of flood locations after an event like the weekend storms, and these updated maps would be used to price policies. “If you are in a flood zone, your premiums will no doubt be rising next year,” he said.

The Warragamba dam is currently releasing around 450 gigalitres of water per day, just shy of the 500 gigalitres estimated to be held in Sydney Harbour. Mr Guse said it’s too early to tell if the government should have released water from the dam earlier, but added insurance companies would likely step up their push for improved mitigation strategies.

“Similar issues arose with Brisbane floods in 2011, it’s only in the last month or so they reached a settlement or judgements as to whether the Queensland government was negligent in not letting the water go.“

“That’s 10 years after the event, this will take an extremely long time to play it’s way through.”

“What is uniform across the industry, it’s always looking at prevention rather than rectification, after the event,” Mr Guse said.