Home » Markets » The last straw: plastic is out and green is in

The plastic pollution revolution is far from the last straw for Australian small businesses. Small straw businesses are sucking it up and ditching plastic straws in response to the groundswell of support for green alternatives. 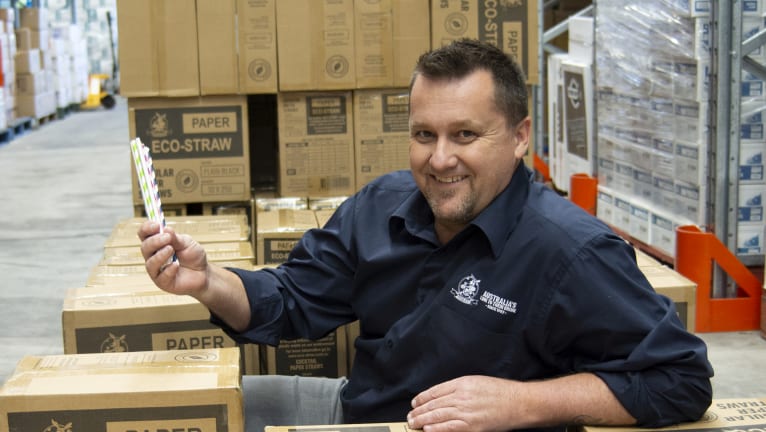 Mick Krause is the founder of Austraw.

Sipahh milk flavouring straws is pivoting away from the plastic straws it currently uses in response to waste-wise consumers. The Australian invention, which is popular with children and commonly stocked in school canteens, is planning to relaunch its product next year with a biodegradable straw.

Trials on the new straws have been underway for the past 12 months, says Georgie Scott, marketing manager at Club Trading and Distribution, the company that owns Sipahh.

“We are at a stage where we are running trials and we're looking, without getting too technical, at the different components of the straw and the different options that we have,” she said.

“We've always wanted to do the right thing and have an environmentally-friendly straw. We knew these environmental issues would become more important, we always knew we'd change it so it’s always been part of our plan.”

There was really no other choice. The growing rejection of single-use plastic items has seen Woolworths ban the sale of straws in its supermarkets and politicians call for straws to be banned like those in Britain.

And despite Sipahh’s current single-use straws being recyclable, Australia is struggling to manage its recyclable waste after China announced a ban on importing recyclables.

Sipahh straws, which contain flavoured beads, are sold in all major supermarkets and in the past year the company has doubled its business to schools. The brand’s retail sales value is $7 million in Australia.

Scott said the future of Sipahh’s new straws will hinge on how willing consumers are to pay for environmentally friendly products.

“It's going to depend on if we can make it work and what the consumer wants to pay at the end of the day,” she said.

“What people say compared to their actual behaviour can be a little different sometimes.”

The backlash against straws has also impacted major brands including Prima and Just Juice juice boxes, owned by Lion Dairy & Drinks. A spokesperson said the company is “working with packaging suppliers to explore potential solutions to ensure consumers can continue to enjoy beverages in this convenient format while also delivering environmental outcomes”.

But it’s small manufacturers such as Queensland’s Austraw that will be hit hardest. The business will phase out plastic straws, which represents 39 per cent, or $1.5 million, of it’s annual turnover by the end of the year.

Owner Mick Krause said it will be a good move for the environment but he’s not sure how beneficial it will be for his business.

“It’s a big move and I hope it pays off or we’ll be out on the street,” he said.

“It is a worry when you’ve got all your life savings in it, for a market to change so quickly. But at the same time, I guess it’s just one of the perils of being in business and we’re doing the best we can to move with it as quickly as we can.”

Austraw, which employs 10 people, has been producing straws since 1989 and when Krause bought it four years ago, he immediately began importing paper straws from China as part of the brand’s products.

It’s this segment of the straw market which is now going gangbusters, he said.

“The recent demand for paper straws since February has been crazy,” he said.

“Our suppliers haven’t been able to keep up. It’s now a matter of getting our stock levels right to supply the market quickly.”

Austraw has invested in two other alternatives to plastic, including oxobiodegradable or oxo-bio straws, and PLA straws made with polylactic acid vegetable starch. Both are biodegradable, food-grade and have a shelf life of more than 12 months.

“They’ve got to be seen as being proactive and being green,” he said.

“Being green is the future for everything, it’s the direction that we’re going in and anybody who doesn’t move in that direction won’t have their product at the top of the list.”