National Australia Bank chief executive Ross McEwan has pledged to consider the findings of the International Energy Agency’s landmark climate report in the bank’s yet-to-be-released policy on oil and gas, after lobbying from environmental activists.

A coalition of climate groups claiming to represent 1 million Australians sent a letter to each of the big four banks on Monday, calling for an immediate end to financing new oil and gas projects and any exposure to the sector to be phased out by 2030.

The letter, obtained by The Age and Sydney Morning Herald, pointed to the IEA’s recent report that declared there could be no new oil and gas fields developed if the world was to achieve the Paris accord’s target of limiting global temperature rises to between 1.5 and 2 degrees Celsius. 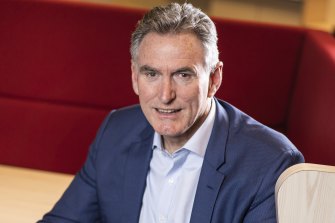 NAB chief executive Ross McEwan has committed to incorporating the IEA’s report into the bank’s oil and gas policy.Credit:Eamon Gallagher

“Australian banks have a powerful role to play in accelerating the transition to a climate-safe economy that creates millions of good jobs,” it said. “The IEA report shows that new gas projects in Australia – including those in the Beetaloo Basin, the Canning Basin, the Narrabri Gas Project, and the Scarborough project and LNG processing facility – are not compatible with reaching net zero emissions by 2050 and should not be financed.”

NAB has already banned funding certain oil and gas projects, including those in Arctic wildlife reserves, but the activists want all new projects banned. Mr McEwan responded within three hours from his direct email account, claiming the IEA’s report would be included in the bank’s review on oil and gas, with a new policy set to be released in September.

“Our working group is taking into account the recent findings of the IEA’s 1.5 degree pathway in the context of this review and my leadership team has already met [to] consider the findings,” Mr McEwan said in the email.

The major banks – Commonwealth Bank, Westpac, ANZ and National Australia Bank – have each pledged to support the Paris Climate Agreement and phase out exposure to thermal coal by the end of the decade.

Australian Conservation Foundation chief executive Kelly O’Shanassy met with ANZ’s head of sustainability Ben Walker on Tuesday to discuss the group’s demands, where he similarly pledged to consider the IEA’s report as one factor in the bank’s future climate policies.

“The IEA has been a bastion of the fossil fuel industry for so long. To come out in the way they have is a real game changer,” Ms O’Shannassy said. “What we were asking for a few years ago with coal has now by and large been committed by the banks. Now, gas is the new frontier.”

Senior federal politicians, including Resources Minister Keith Pitt, have publicly attacked major banks and superannuation funds over decisions to exit thermal coal, while the government has committed to funding a $600 million gas plant in the Hunter Valley has touted the resource as an important tool in the transition to renewable energy.

Ms O’Shannassy said the banks are aware gas is a “major polluter” and have demonstrated they are not afraid of government backlash.

“Given the banks are making these changes to their climate policy despite the government’s rhetoric, despite the government threatening or belittling the banks, I feel that’s indicative of them doing the best thing in the interest of their bank, which is to not invest in fossil fuels because they’re going to be stranded assets.”

A spokesman for CBA said the bank was “happy” to meet with the activists, and pointed to its climate policy from last year that committed to fund only new oil and gas projects that are Paris-aligned and conduct environmental assessments. Westpac did not comment on the letter but pointed to its oil and gas policy that mirrors CBA’s.

ANZ said its exposure to oil and gas had remained “relatively flat” since 2015, while thermal coal mining has reduced by around 70 per cent.