New York (CNN Business)The first half of the year was lousy for investors as stocks sank, cryptocurrencies crashed and even the supposedly less risky bond market performed poorly.

That bond slump is bad news for conservative investors, retirees living on a fixed income and anyone trying to buy a house. But the worst may be just about over.
Mortgage rates have been spiking along with bond yields, because rates rise as bond prices fall. And bonds have plummeted this year: The benchmark 10-year US Treasury yield has more than doubled in 2022, from about 1.51% at the end of last year to 3.16% currently.

The main reason for the bond yield spike: Aggressive interest rate hikes from the Federal Reserve and expectations of more to come. But now, experts think the bond market could be pricing in the likelihood that the Fed’s rate increases will slow inflation. That means yields could soon start to slide back. 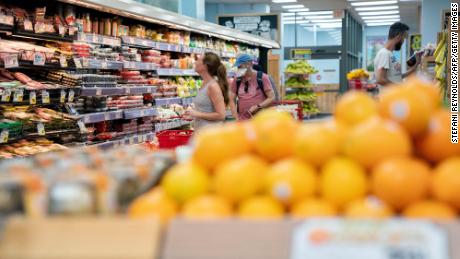 It also means that mortgage rates, which have inched close to 6% for a 30-year fixed loan, may pull back — especially if the Fed doesn’t have to keep hiking rates as dramatically.

“It’s been painful in fixed income because bonds have not provided the portfolio protection that is valued by investors,” said Chip Hughey, managing director of fixed income at Truist Advisory Services.
“But there is the perception that the Federal Reserve may have had to overtighten,” Hughey added. “That tug of war could put downward pressure on yields.”

Lately anyone owning bonds, or fixed income exchange-traded funds that track Treasuries, has been hurt — and the idea of Treasuries as a safe haven has been turned on its head. But the good news about the bond yield spike is that fixed-income investors may already be doing a lot of the dirty work for Fed chair Jerome Powell, experts say.
“Interestingly, the bond market sniffed out trouble and has done the Fed’s bidding driving bond prices down and yields up,” Nancy Tengler, chief investment officer and CEO of Laffer Tengler Investments, said in a report Monday.
Others point out that inflation, which hit a year-over-year rate of 8.6% through May according to the most recent consumer price index report, is probably close to finally peaking. That should push bond yields lower as well.
“We’re past the peak inflation panic after the last CPI report. Investors can feel safer in bonds now. We’re close to capitulation,” said Matt Smith, an investment director at Ruffer.
To be sure, yields could still climb a bit further before they finally take a meaningful downturn. But the worst is probably over. Experts are forecasting a more gradual increase from current levels, not another doubling.
“The majority of the damage in the bond market may be done,” said Steve Wyett, chief investment strategist with BOK Financial.
Wyett thinks the 10-year yield might top out at around 3.5% later this year before starting to slide as inflation numbers head “quite a bit lower” by the fourth quarter.

That would be music to the ears of investors who own bonds because they don’t want to take on the risks associated with meme stocks, bitcoin and other more speculative assets.
“It’s hard to say when we’ll have a sharp turnaround. The performance this year has been pretty bad,” said Henry Song, portfolio manager with Diamond Hill. “But it’s a much more attractive entry point for bonds now, even if it’s not the bottom. There is a lot of upside potential.”
Source: Read Full Article