Hong Kong (CNN Business)War in Europe has triggered a massive flight of capital from an Asian island nearly 5,000 miles away.

Over the last month, Russia’s invasion of Ukraine has heightened concerns about the risk that China could increase its military force against Taiwan, triggering what some analysts have described as an unprecedented exodus by overseas investors.
In the three weeks following the invasion, foreign investors dumped shares worth about 480 billion Taiwanese dollars ($16.9 billion), according to Alex Huang, director at Mega International Investment Services, a Taipei-based firm.

That outflow is the biggest on record, he said, exceeding the value of Taiwanese shares sold by foreign investors in the whole of 2021, which Bank of America analysts have estimated at $15.6 billion. Goldman Sachs analysts project that Taiwan has seen an outflow of $15.6 billion over the past month, topping last year’s tally of $15.3 billion.

It’s “the biggest [rout] on record so far,” Huang told CNN Business. “This is even bigger than the global financial crisis in 2008.” 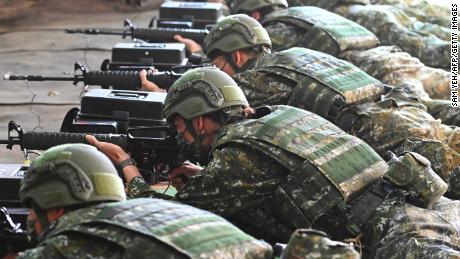 Taiwan had been gaining traction as a foreign investment destination in recent years, with strategists often bundling it together with India, China and South Korea in a group of economies known as the “TICKS.”
But Russia’s attack on Ukraine has renewed fears that China could be emboldened to advance its own military aggression toward Taiwan, a self-governed democratic island that the Communist leadership in Beijing has long claimed as part of its territory, despite having never ruled over it.

Speculation has grown that China could act, “either to exploit Western distraction or to advance a new world order,” Eurasia Group experts wrote in a March report. “But these comparisons overlook key differences and ignore political signals from Beijing and Taipei.”

Both Beijing and Taiwan have dismissed the comparison, albeit for very different reasons. And despite the outpouring of cash, Taiwan’s overall stock market hasn’t suffered catastrophic losses.
Shares on the Taiwan Stock Exchange were little changed between late February — when Russia invaded Ukraine — and March 17, according to data provider Refinitiv.
Huang said that was because several government-backed Taiwanese banks recently went on a buying spree, helping mitigate the loss.
He said that investors based in Taiwan weren’t suffering the same loss of confidence, in part because many believed the two situations were dissimilar, and because of a consensus that the United States would step in to help defend the island in the event of a serious attack. 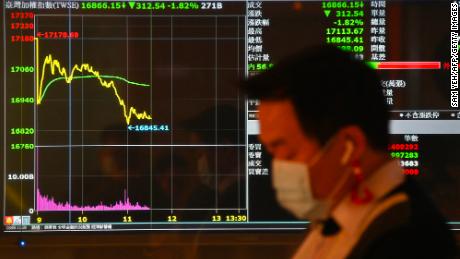 Even before the Ukraine invasion started, global investors had been nervous because of numerous factors, such as rising prices of oil and raw materials and expected rate hikes in the United States.
Then the war began, creating “a perfect storm,” Huang said.

Taiwan is best known as a global powerhouse in the making of semiconductors, which power everything from cars to smartphones. The island of 24 million people is the world’s largest manufacturer of chips, accounting for more than half of worldwide output.
One of Taiwan’s most prominent companies, TSMC (TSM), is the global market leader, supplying to players such as Apple (AAPL) and Qualcomm (QCOM). The chipmaker is so valuable, analysts say it is often seen as a bellwether for Taiwan’s stock market.
Among locals, TSMC is even dubbed the “sacred mountain that protects national security.”

But since late February, its shares have slipped more than 3% both in Taipei and New York. Taiwan’s tech stocks have also lagged the broader market, with the island’s tech index down 2% over the same period, according to Refinitiv data.
Because of its “stranglehold” on the world of computer chips, “most of the Taiwan-related worries tend to be reflected in semiconductor stocks,” said Phelix Lee, an equity analyst at Morningstar.
In a report to clients, he said that investors had two concerns: fears of a Chinese invasion, and anxiety over the supply of raw materials, including neon.

Neon is a key component in the lasers used to produce chips. Lately, some neon suppliers in Ukraine have been forced to stop operating because of the conflict, raising fears that it could worsen an ongoing shortage in semiconductors.
But if anything were to happen to Taiwan, there’s more at stake for the global economy than chips. The island is also an important manufacturer of high-end bicycles and sportswear, including factories for global brands, Huang added.

Taiwan’s currency has also suffered. It has gone from serving as a “regional safe haven to geopolitical risk proxy” in recent weeks, according to Bank of America.
“Geopolitical uncertainties over Taiwan are the biggest drivers of portfolio outflows,” analysts there wrote in a note to clients earlier this month.
They said that the Taiwanese dollar was “beginning to lag after a stellar year in 2021,” after being hit by “a sharp increase in risk aversion” following the Russian invasion.
But despite the tension, many experts believe that Taiwan is safe for now.
“Russia’s invasion of Ukraine does not up the near-term odds that China invades Taiwan,” Eurasia Group analysts wrote in their report earlier this month.
They noted that “both Beijing and Taiwanese President Tsai Ing-wen have played down the connection between Ukraine and Taiwan,” and that there appeared to be “no preparations in Beijing and no panic in Taipei.”
Still, Taiwan’s Foreign Minister Joseph Wu told reporters this month that the government was “watching very carefully what China may do to Taiwan.” The island also recently boosted some of its military training. 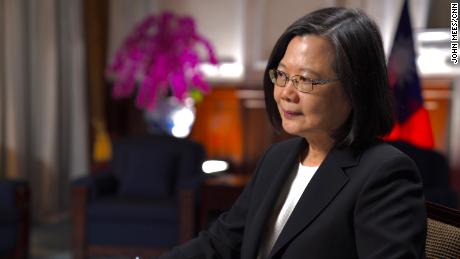 Taiwan’s President: Threat from China is growing every day (October, 2021)

China’s ruling Communist Party has repeatedly vowed to “reunify” with the island — using force if necessary.
“Ukraine is a sovereign state, while Taiwan is an inseparable part of China’s territory,” Qin Gang, China’s ambassador to the United States, wrote in a Washington Post op-ed published last week.
“These are totally different things.”

As for investor jitters, “we think the fear with regard to Russia has peaked already, and will fade away to become a secondary consideration,” said Huang.
— Wayne Chang and Eric Cheung contributed to this report.
Source: Read Full Article