SoftBank was one of the morning’s biggest losers. Shares fell 5.5% in Tokyo, extending a five-day losing streak. Investors have been unnerved about the Japanese tech conglomerate since the Financial Times and the Wall Street Journal reported that it had been making huge and risky bets on tech stocks.
So far, SoftBank has plunged about 13% this week, wiping about roughly $14 billion off its market value.

Every major index in Asia Pacific was lower. China’s Shanghai Composite (SHCOMP) lost 1.3%. Japan’s Nikkei 225 (N225) dropped 1.6%, while Hong Kong’s Hang Seng Index (HSI) — which this week added big tech stocks Alibaba and Xiaomi to its list of components — fell 1.1%. South Korea’s Kospi (KOSPI) shed 1%. Australia’s S&P/ASX 200 was the region’s worst performer, dropping 2.6%.
The retreat followed yet another bad day on Wall Street. The Nasdaq (COMP) closed down 4.1% Tuesday and fell into correction territory — defined as a 10% drop from its most recent peak. The S&P 500 (SPX), the broadest measure of the US stock market, closed down 2.8%, and the Dow (INDU) ended down 2.3%, or 632 points.

Futures trading was mixed after hours.
“A third consecutive day of stock sales may appear alarming, but the rise that preceded it caused an equal amount of alarm (over a longer period) to those of us who struggled to mentally buy into the stock rally,” wrote Robert Carnell, regional head of research in Asia-Pacific for ING. 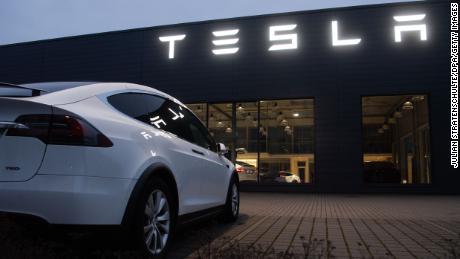 “There is room for this to go further, if stocks are to more plausibly reflect the macro and pandemic reality,” he said, though he added that there’s no “panic in evidence” — meaning the sell-off is unlikely to be followed by hasty policy reactions from central banks and governments.
“When you juice markets this hard, you have to imagine the occasional pip will stick in your throat,” Carnell added.
Source: Read Full Article