Home » Thanks Josh! Why the banks love the budget

When the chiefs of Australia’s four banks went to bed after listening to Treasurer Josh Frydenberg deliver a massive spending budget, they surely counted dollars rather than sheep.

These days our domestically focused banks generate profit growth on the back of increasing lending to home buyers and to small and medium sized business customers.

The budget delivered ingredients to bolster both – particularly business. So it comes as no surprise that the big banks were quick to deliver a robust thumbs up to the policy measures. 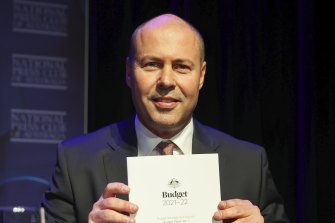 “I think the measures that they’ve put in place, they’re practical, they’re well understood by businesses. In our experience businesses are very responsive to that.”

CBA reported on Wednesday that its lending to businesses grew by more than 8 per cent in the three months to March – three times the rate of the general market.

NAB’s chief executive Ross McEwan was particularly effusive, “this budget builds on that momentum (in business confidence and conditions) and will help deliver an increase in business investment and job creation”.

“NAB continues to lend $2.5 billion a month to Australian businesses and in recent months we have seen a pipeline of business lending opportunities develop that we have not experienced for many years.”

Westpac’s Peter King said it was pleasing to see the ongoing support for business, while ANZ’s Shayne Elliott described the government as having delivered “the right budget for these economic times and (one which) is good news for Australian industries, households and social services”.

The specific initiatives designed to provide tax breaks for business – including allowing instant asset write-off equipment purchases and the extension of the policy that enables companies with COVID losses to offset them against pre-COVID profits – will be a boon for small and medium sized companies.

History has demonstrated that instant tax write-offs stimulate businesses to buy all sorts of equipment, from computers to machinery.

The budget also delivered additional assistance to home buyers via guarantee schemes that will allow those eligible to access loans with a smaller deposit.

These measures will only accelerate the growth in home lending – which has already taken off over the past year.

The specific measures around housing and business are only part of the story. The larger than expected spending on aged care, child care, the NDIS and infrastructure are all designed to stimulate employment, spending and the broader economy – all of which feeds into consumer and business sentiment and ultimately borrowing.

As the community digested the budget on Wednesday, CBA delivered a strong quarterly earnings update – up 24 per cent on the average profit of the past two quarters on the back of continued market share gains in home loan lending and a large boost in lending to business.

The recent growth in lending to investors is what the banks are now needing to watch carefully as it is generally higher risk and more speculative.

It joins the other major banks in delivering better than expected profits. In large part this can be attributed to the winding back of the large COVID provisions they took last year.

The improved economic outlook which the big spending budget will help deliver should also provide the banks with the opportunity to further windback provisions. This will in turn further underwrite profit growth.

The CBA reported lending in the March quarter to home buyers rose by 5.3 per cent slightly ahead of the rest of the market. The expansion of that government assistance will add to some market demand. The downside is that it could add further pressure to house prices which are already up 10 per cent this calendar year.

Meanwhile, the recent growth in lending to investors is what the banks are now needing to watch carefully as it is generally higher risk and more speculative. Over the past week the four banks have been keen to point out that lending standards have been maintained.

But for now at least the banks will be celebrating.

A concise wrap of the day on the markets, breaking business news and expert opinion delivered to your inbox each afternoon. Sign up  Here.