New York (CNN Business)It’s no secret that consumers love Amazon, Walmart and Target. But they are not the only retailers that bargain-hunting shoppers — or investors — are expected to flock to during the holidays.

With Black Friday a week away, the SPDR S&P Retail ETF (XRT) is up an astonishing 61% this year. That’s extraordinary, considering it does not have gigantic positions in Amazon (AMZN), Walmart (WMT) or Target (TGT) among its top holdings, i
The ETF has roughly equal weightings in more than 100 stocks. Many of the mall-based companies that investors left for dead in 2020 during the pandemic but have since roared back to life this year are more responsible for powering the ETF’s stellar 2021 performance.

Dillard’s (DDS), Macy’s (M), Abercrombie & Fitch (ANF) and jeweler Signet (SIG), the owner of Jared and Kay, make up some of the larger weightings in the fund. And they have each more than doubled in 2021. 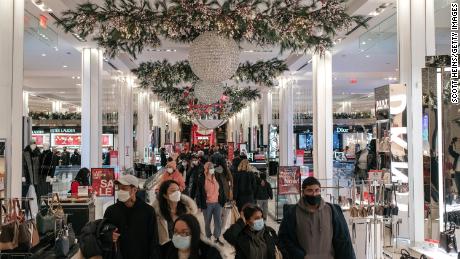 Attention holiday shoppers: Buy now before it is out of stock

Macy’s reported earnings and sales that topped forecasts Thursday morning and issued a bullish outlook for the holidays. The stock soared more than 20% on the news.

“The consumer is healthy, and we expect the strong demand to continue, particularly as people return to work,” said Macy’s chief financial officer Adrian Mitchell during a conference call with analysts.
Another notable holding in the ETF, Kohl’s (KSS), is also thriving. The stock surged 10% Thursday after it, too, reported strong third quarter results. The stock is up nearly 55% this year.

Consumers, armed with more money from bigger paychecks and a high amount of savings thanks to stimulus checks from earlier this year, seem more than willing to venture back out to the mall to shop in physical stores instead of sitting at home and buying things on their phones or laptops.
It also appears that larger retailers are doing a better job of restocking their shelves, despite supply chain concerns, shipping delays and inventory challenges that are hurting smaller stores.
Just look at how well the two companies that used to be part of the once-struggling L Brands are now doing.
L Brands broke up earlier this year into two publicly traded companies: Bath & Body Works and Victoria’s Secret. Both companies, which are each in the retail ETF, reported strong earnings earlier this week and their stocks surged on the news. 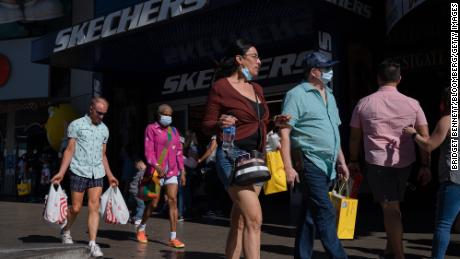 Of course, the threat from Amazon hasn’t gone away. Although Amazon shares briefly dipped after reporting earnings last month that underwhelmed Wall Street, the stock has bounced back lately and is once again not far from an all-time high.
So investors in some of the former retail laggards have to hope that some of these brick and mortar stalwarts will be able to do a better job in the digital commerce realm.
Some retailers, most notably Kohl’s, are also partnering with Amazon to try and capture some of its e-commerce magic. Kohl’s lets Amazon customers return orders at its stores.

“Let me just say that with Amazon, we continue to be pleased with that partnership,” said Kohl’s CEO Michelle Gass during its earnings call Thursday. “And we continue to see new customers from that program. So we saw that build.”
Gass added that Kohl’s own digital efforts are reaping rewards too, with digital revenue growing from both last year and pre-pandemic levels in 2019. Digital sales now account for nearly 30% of total revenue at Kohl’s.
Source: Read Full Article