Home » Markets » This Week Is the 7th-Inning Stretch

The Baseball Almanac calls the seventh-inning stretch, “Perhaps the most mundane, yet physically rewarding moment of every baseball game.” Over time, I’ve learned to respect this time of the stock market calendar year in a similar manner. The timing of it is very close too, as we approach about two-thirds of the way through the game, or the year in this case.

I’ve found that it’s a great time to reflect on the decisions we’ve made so far in 2018 and mentally prepare for the rest of the year. The period I’m referring to specifically is the week before Labor Day weekend and the week after. Things historically get back to normal around Sept. 10-11.

Earlier in life, I would over-trade during this last week of August. I would read too much into moves made during this low-liquidity, quiet time of the year. I’ve learned the hard way that this is not the time to be making aggressive decisions and overthinking things. We want to spend this time getting better at what we do, reading books and avoiding the news more than ever. News sources tend to get extra creative during this period. (For more, see: Seasonal Summer Sell Signals: Myth or Reality?)

Some of the smartest guys I know are on vacation this week. I like that move a lot, although for other reasons, I take my big break every June. It doesn’t matter how you treat this period, as long as we are aware of the dynamics of the current market environment. The rookies are on the trading desks and not allowed to do much. We get silly moves that end up resolving in the opposite direction over the next week or two.

This is another reason why I like observing more than I like aggressively positioning ourselves. Ladies and gentlemen, welcome to Whipsaw Hunting Season. With the lack of liquidity and B-squads on the desks, you often see low-volume breakouts and breakdowns that reverse and lead to violent moves. This is a similar period as the time between Christmas and New Years.

[If you’d like to learn more about the tools that can help you succeed as a trader, check out my Technical Analysis course on the Investopedia Academy, which includes real-world examples and over five hours of video content.]

Last year, there were a bunch of failed breakdowns that sparked huge rallies. One example was Canadian Imperial Bank of Commerce (CM), which resolved its multi-month consolidation to the downside on Aug. 29 and then quickly recovered after labor day. Notice how momentum got nowhere near oversold conditions on that break. Prices of Canadian Imperial Bank then proceeded to rip for the next five months: 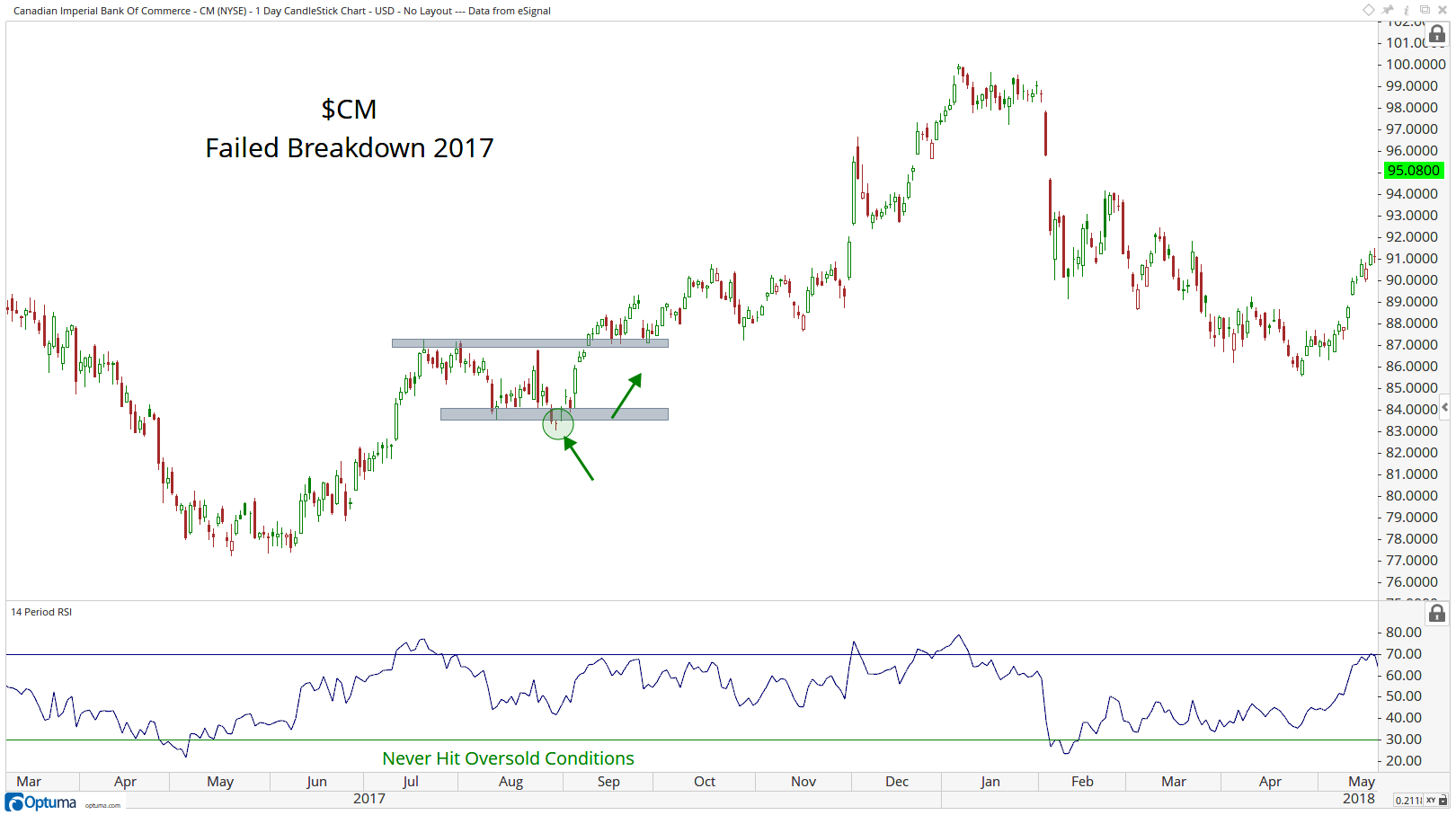 Citizens Financial Group, Inc. (CFG) was another one. Look at how Citizens Financial Group broke key support in early September and then exploded higher in the second week, once whipsaw hunting season was over. This sparked a 40%+ rally over the next two quarters and is classic behavior for this time of year: 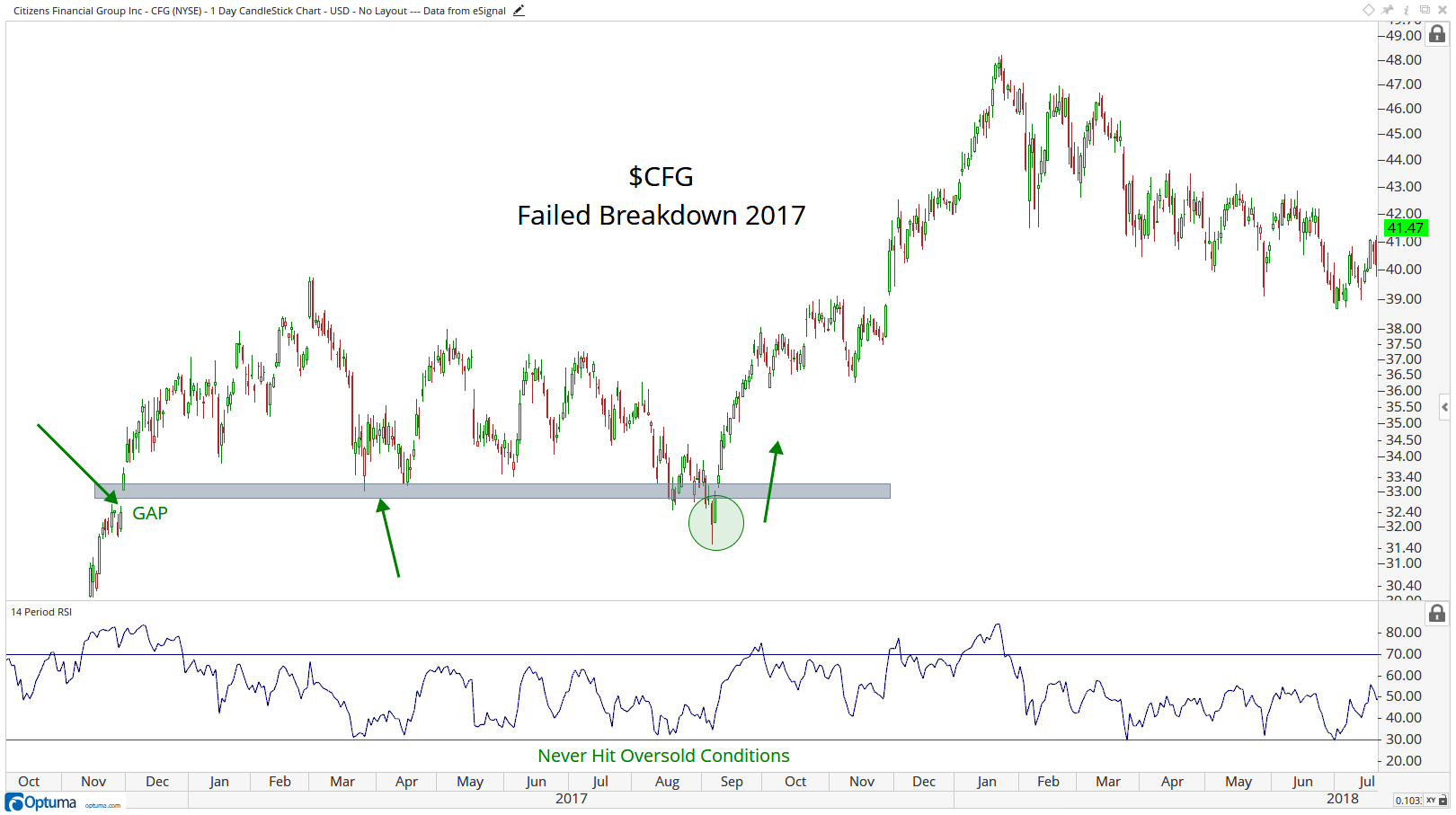 There are a few interesting candidates for failed breakdowns that we’re already watching in 2018. One of them is in General Electric Company (GE), believe it or not. The new nine-year lows in price last week with a potential bullish divergence developing could be the catalyst to send this thing ripping. Not only did momentum diverge positively from the prior low, the relative strength index (RSI) did not even reach oversold conditions, which is consistent with an environment where prices are rising. A double from here in GE is not out of the question: 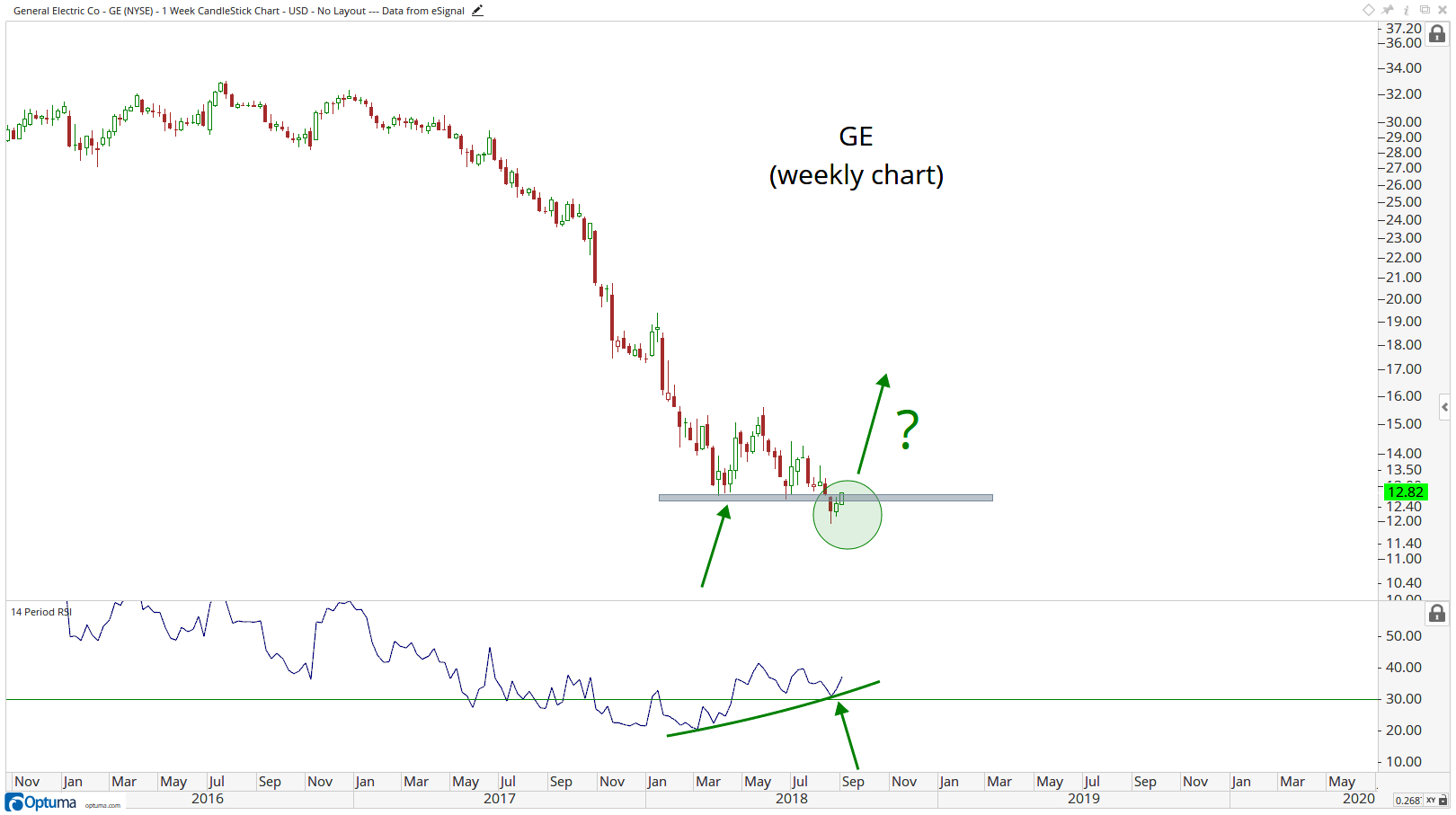 Before we get ahead of ourselves, I think we need to reiterate the $13 level. This has been the big price point on the weekly chart (which is currently incomplete), and it makes zero sense to be long if we’re below that. So if we’re above $13, owning GE shares presents an extremely favorable risk vs. reward opportunity.

This would be perfectly normal for this time of the year. And even still, some of the smartest people I know continue to dismiss seasonality. While I agree that blindly selling in May and going away is stupid, being aware of the way we behave as humans and finding ways to profit from it, or at least find data to help us profit from it, is our duty as responsible investors. Why else are we in the market, if not to make money? I think ignoring the behavior behind the scenes here makes little sense.

We can’t forget what time of the year we’re in: it’s the seventh-inning stretch! At a baseball game, you get up and sing “Take Me Out to the Ballgame,” then go up and get a hot dog and one last beer before they cut off the alcohol sales. In the U.S. stock market, we want to catch up on some reading, review our trades for the year, not over-trade or overthink and be on the lookout for whipsaws.