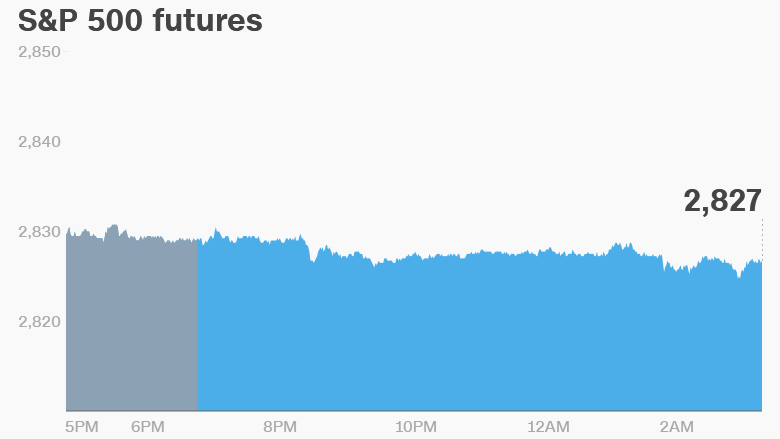 The economy has added an average of more than 214,000 jobs a month this year after blowing past economists’ expectations in May and June. Economists predict businesses added 190,000 jobs in July.

The unemployment rate is forecast to dip from 4% to 3.9%.

2. Stock market movers: Investors are reacting to a flurry of earnings reported after the closing bell on Thursday.

Shares in Take-Two Interactive Software (TTWO) were poised to surge 11% at the open. GoPro (GPRO) stock was set to advance 4% while Shake Shack (SHAK) shares were down 5% premarket.

The sexual harassment controversy involving CBS chief Les Moonves was the topic on most observers’ minds when the company held its earnings call Thursday, but the company declined to address the elephant in the room.

Less than a week ago, The New Yorker published allegations from six women who said Moonves sexually harassed them.

Moonves spoke to investors on the call, touting a strong second quarter for the company. CBS reported that revenue was up 6% compared to the same period last year.

Shares in the Royal Bank of Scotland (RBS) were up 4% after the company reported earnings for the past six months and announced it would relaunch its dividend.

4. Currency concerns: The Turkish lira hit a record low against the US dollar as a sanctions battle with the United States continues to grab headlines.

The US Treasury Department placed sanctions this week on Turkey’s ministers of justice and interior in response to the detention of pastor Andrew Brunson.

Turkey is also suffering from rampant inflation and concerns over central bank independence. Inflation in July soared to nearly 16%.