Home » Markets » Warren: 'We have got a real problem on Wall St'

“We actually don’t know who all the players are in all this — whether there’s big money on both sides,” Warren told Dana Bash on “State of the Union” Sunday. “That’s why we need an SEC investigation.”
Market watchers have been largely sympathetic to traders betting up stocks like GameStop (GME) after they were promoted by a group of Redditors on subreddit WallStreetBets, which now has more than 7.5 million followers. Hedge funds and other short-sellers lost huge amounts of money after they bet against the stocks that the Redditors targeted. 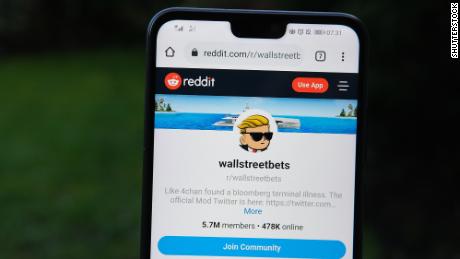 Still, Wall Street took advantage of the electric surge in GameStop’s stock, too. Its 1,600% growth this month wasn’t powered exclusively by retail investors using free trading apps, such as Robinhood. Hedge funds covering their bets and other investors with deep pockets helped drive up the share price.
For example, Warren notes that when Robinhood, TD Ameritrade and other brokerages began restricting access to AMC (AMC), GameStop and similar stocks, Wall Street players remained able to trade those stocks.

She called Robinhood’s decision to flip the switch and prevent users from buying GameStop in the middle of a trading session “just wrong.”
“It can’t be trying to help the hedge funds at the same time it pretends to help individual investors,” Warren said, admitting that she’s unsure if that’s what Robinhood was doing — not enough information exists in an opaque marketplace.
That’s why Warren believes the SEC should investigate the GameStop saga: to ensure a set of players isn’t manipulating the market, treating it like a casino and preventing everyday investors from taking part in the free markets.
“Understand: What’s happening with GameStop is just a reminder of what’s been going on on Wall Street now for years, and years and years. It’s a rigged game,” she said. “We need a market that is transparent, that is level and open to individual investors. It’s time for the SEC to get off their duffs and do their jobs.”
Warren said Wall Street and Corporate America have taken advantage of retail investors through share buybacks for years — artificially inflating the value of their stock prices — and through unfair arbitration clauses that benefit broker-dealers. She reiterated her call to end share buybacks and called for a more active and forceful SEC.

The SEC should “grow a backbone” and enforce its own rules, she said.
“The truth is the hedge funds, many of the giant corporations love the fact that markets are not efficient,” she said. “They love being able to manipulate these markets because they get better returns and individual investors lose out.”
Source: Read Full Article