Home » Markets » What does the future hold for Chinese companies listed in the US?

Hong Kong (CNN Business)Chinese state media is urging investors to stay calm following a brutal stock market sell-off this week that has wiped out hundreds of billions of dollars in value.

Chinese state-run newspaper Securities Times published a commentary Wednesday acknowledging the “changes in policy for certain industries” after a market rout on Monday and Tuesday that came as investors reacted to Beijing’s widening crackdown on private enterprise.
“Investors should have confidence in the market,” it wrote. “A short-term shock does not change the nature of the long-term positive trend … China’s economy and markets are at an advantage in terms of its width and depth.”

Tencent (TCEHY) shares closed flat after news that the company’s WeChat messaging platform would temporarily suspend all new user registrations to comply with regulations relating to an upgrade of its security systems. It had earlier fallen as much as 6.4%, before paring most of those losses.

Meantime, the Hang Seng Tech Index, a Nasdaq-like index that tracks the largest tech firms trading in the city, closed up 3.1%, while Meituan and Alibaba (BABA) each rebounded 7.5% and 1.8%, respectively.
Each had seesawed throughout the day, at one point posting declines of between roughly 2% and 3%.
Monday and Tuesday had been Meituan’s two worst days on record. The company shed more than $62 billion in market cap after regulators issued guidelines Monday calling for improved standards for food delivery workers. Meituan runs one of China’s biggest food delivery platforms, with hundreds of millions of users making transactions on its app annually.
Tencent also recorded its worst day in about a decade on Tuesday, losing more than $100 billion in market value. The losses came after it was ordered by regulators over the weekend to scrap its plan to acquire another music streaming player, China Music Corporation. The WeChat announcement came on top of that, dealing another blow.
Altogether, three of China’s most valuable companies — Tencent, Meituan and Alibaba — lost more than $237 billion through the first two days of trading this week. That’s not even accounting for the stocks of Chinese tutoring firms, which were slammed after officials announced a clampdown on the country’s fast-growing education sector. 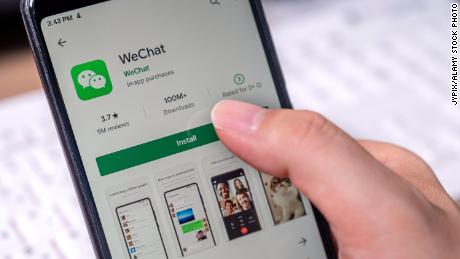 This week’s sell-off in Hong Kong will go down as one of the biggest in history, according to Bespoke Investment Group.
“Since the end of the financial crisis, there hasn’t been a single two-day decline in the Hang Seng that has exceeded the magnitude of the last two days,” the firm wrote in a note to clients Tuesday, referring to the city’s benchmark index.
Still, there could be “potential for a short-term bounce” as investors “look for opportunity in the weakness,” it added.

In recent months, China’s tech industry has suffered a series of regulatory body blows. Before this week’s plunge, shares of overseas-listed Chinese tech firms had already lost a staggering $1 trillion in value between February and mid-July, according to Goldman Sachs analysts.
Now, that is spreading as China’s clampdown continues to ripple across sectors.
In the investing community, there are growing concerns that Chinese companies may be deterred from going public in the United States, particularly after new requirements for those looking to list their shares overseas and a disastrous initial public offering in New York by Didi (DIDI). 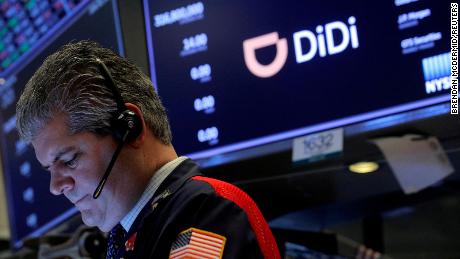 The ride-hailing giant made a splash last month in the biggest US IPO by a Chinese company since Alibaba’s (BABA) debut in 2014, raising some $4.4 billion.
But just days after the fanfare, Didi’s shares crashed as Beijing launched a probe into the company and suspended the registration of new users on its flagship app.
Since then, several Chinese firms have backed away or reportedly reconsidered plans to list in the United States. TikTok owner ByteDance, social e-commerce platform Xiaohongshu, fitness app Keep and medical data company LinkDoc Technology have all either shelved or scrapped plans to list in New York, according to reports by Bloomberg, the Wall Street Journal and the Financial Times. (ByteDance declined to comment on those reports, while the rest did not respond to requests for comment last week.)
On Tuesday, Chinese bike-sharing startup Hello (formerly known as Hellobike) shelved plans for a US IPO it had filed for just months ago.
The Shanghai-based firm, which is backed by Alibaba-affiliate Ant Group, had been planning to raise up to $100 million.
Hello did not specify why it had chosen to step back from the share sale. In a regulatory filing, it simply said that “it no longer wishes to conduct a public offering of securities at this time.”

But it alluded to regulatory constraints in a later statement, saying: “We will continue to operate under national supervision and its regulations, as well as the requirements of a capital market environment, and pursue an IPO in a timely manner.”
— CNN’s Hong Kong bureau contributed to this report.
Source: Read Full Article