Arizona Republican lawmakers have launched a “full-scale assault” on democracy, a coalition of voting rights groups in the state warned Tuesday, pointing to the introduction of a flurry of bills that would restrict ballot access and overhaul the state’s election system in the wake of major GOP losses there in the 2020 election.

Voting advocates scored a major victory in the fight to thwart the GOP’s efforts Tuesday afternoon when a bill that would have purged thousands of Arizonans from the state’s early voting lists failed in the state Senate.

But that legislation was just one of the bills targeting voting rights that could receive a vote this year. Republicans, who hold majorities in both chambers of the state legislature, are still considering proposals to limit or eliminate no-excuse absentee voting, make it harder to obtain absentee ballots, and strengthen voter ID provisions.

One bill under consideration would require notarization for mail-in ballots, while others would mandate that voters drop off early ballots in person instead of returning them by mail, or move up the deadline for submitting them.

Those are among the 19 bills aimed specifically at voting rights in Arizona, according to a tally from the Brennan Center for Justice. But voting rights groups have counted as many as 40 legislative proposals that they say are more broadly anti-democratic, including one bill that could allow the state legislature to invalidate and overturn election results.

President Joe Biden defeated Donald Trump in Arizona by only 20,600 votes in last year’s presidential election — or just slightly more people than it’d take to fill an arena for a Phoenix Suns game.

“We are looking at dozens and dozens of bills that put barriers in the way of voters, that undermine the vote by mail system, that would gut the grassroots ballot initiative process and criminalize protests. It’s a full-scale assault on democratic norms, ideals, and institutions,” Emily Kirkland, the executive director of the grassroots group Progress Arizona, said during a Tuesday conference call organized by Stand Up America, a national progressive advocacy group.

“It’s a really urgent situation,” Kirkland said. “It feels like a five-alarm fire.”

The GOP legislative push is specifically aimed at suppressing minority votes, advocates say, in order to blunt the power of the coalition that pushed Biden and newly elected Democratic Sen. Mark Kelly to victory.

“The growing power of communities of color and our willingness to turn out in elections for the past 10 years, especially here in Arizona, is being met with such resistance, blatant white supremacy, and just a naked attempt to hold on to power by the majority party at our state legislature,” said Randy Perez, the democracy director for the advocacy group LUCHA Arizona.

The Arizona GOP’s push is part of a broader Republican effort to roll back voting rights and overhaul election systems in the wake of former President Donald Trump’s loss last November, which many Republicans have baselessly asserted was the result of widespread voter fraud. Nationwide, lawmakers in 33 states have filed 165 bills that would further restrict voting, according to the Brennan Center for Justice, which says that lawmakers have introduced four times as many bills that seek to limit voting rights compared to last year.

States like Arizona, Pennsylvania and Georgia ― all of which Trump lost ― have taken center stage. The Pennsylvania GOP has introduced more than a dozen bills to roll back voting rights in the Keystone State, which Trump lost by roughly 81,000 votes, or just more than 1 percentage point. In Georgia, where Trump fell 12,000 votes short of victory and Republicans lost two Senate runoff elections in January, the GOP has taken aim at the state’s vote-by-mail system, which has been in use for more than a decade, and introduced legislation to strengthen voter ID laws by requiring two forms of identification at the polls.

Those efforts, like other voting restrictions the GOP has long supported, would disproportionately affect Black, Latino and other minority voters.

But Republicans have not limited the efforts to states they control or that featured close elections in November. Minnesota’s GOP state Senate is considering voter ID legislation, a proposal that isn’t likely to go anywhere in this session but that offers an indication of the sort of restrictions Republicans would pursue if they win back the Minnesota state House in the 2022 elections. Minnesota voters rejected a voter ID referendum in 2012.

The bills take aim at voting provisions that helped fuel massive turnout last year, when Arizonans cast ballots in record numbers during the 2020 primaries and again during early voting periods ahead of November’s election.

Unlike other states that expanded voting by mail because of the COVID-19 pandemic, Arizona has utilized mail-in and early voting for years to make casting ballots easier. But Trump and the GOP fueled skepticism of the system by spreading empty claims of widespread fraud, even though it did not occur and courts tossed out multiple challenges to the state’s election results.

“The proposed changes in these bills pose a grave and real threat to free and fair elections in Arizona,” said Alex Gulotta, the Arizona state director for All Voting Is Local Action, a voting rights group. “Lawmakers pushing these bills are not fueled by facts or data, but by an unrelenting desire to remove power from voters at all costs.”

Arizona Republicans maintained control of each chamber of the state legislature in November, despite Democratic hopes of flipping both. But they lost a second consecutive U.S. Senate race and the presidential election for the first time since 1996.

There is no evidence that voting by mail and early voting provide partisan advantages to either party, but in 2020, progressive voting rights groups and Democratic campaigns focused heavily on boosting turnout via mail balloting, while Trump and the GOP began dismissing it as fraudulent and illegitimate months before polls opened.

That, layered on top of an intense organizing focus on Latino and Native American voters, in particular, helped Biden and Kelly take advantage of a shifting Arizona electorate that could portend a bleak future for Republicans in statewide races there. 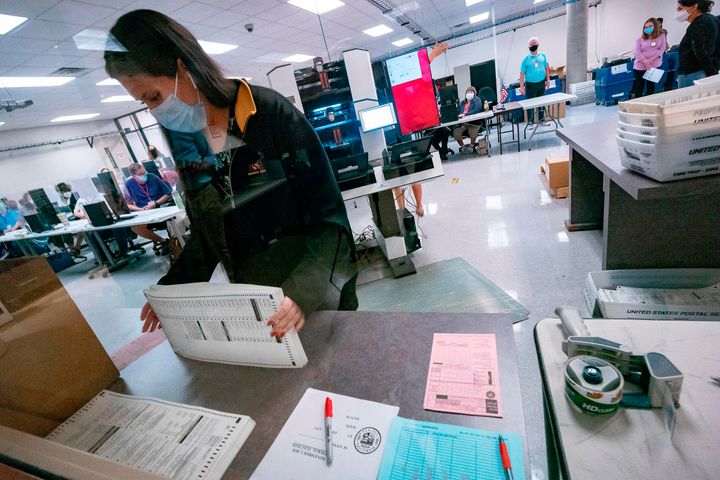 The Republican effort to curb voting rights to alter that future suffered a setback on Tuesday when the state Senate failed to advance legislation that would have purged Arizona’s permanent early voting list, which allows voters to sign up to have ballots mailed to them automatically each election. Had it passed, the bill could have pushed tens of thousands of Arizonans off the rolls, with a disproportionate effect on Latinos. Between 25,000 and 50,000 Latino voters would have been purged from the list, Perez estimated on the call. That would amount to between 5% and 7% of registered Latino voters in the state.

“This reckless bill was a blatant attempt to suppress votes — and it should never have made it to the floor of the Arizona Senate,” Brett Edkins, the political director for Stand Up America, said in a statement after the vote. “We’re grateful to the lawmakers who voted this bill down and to the hundreds of grassroots activists who called their lawmakers to oppose it, but we cannot rest yet.”

A similar bill proposed in the state House of Representatives has not come up for consideration yet.

Kirkland, of Progress Arizona, said voting groups would “fight tooth and nail” to stop each bill in the legislature. But they also plan to pressure Republican Gov. Doug Ducey, who bucked his party (and earned censure from the state GOP) by refusing to go along with Trump’s voter fraud conspiracies after the election.

“He made it really clear in the fall and over the last couple months that Arizona’s election system is safe,” Kirkland said. “And so it’s important for him to follow through on that by making clear that he is not going to sign bills that interfere with or mess up this robust system that we already have.”

Voting rights groups also said they would continue to pressure Congress to pass comprehensive legislation to protect voting rights and a new version of the Voting Rights Act in particular.

Democrats in the U.S. Senate introduced a major voting rights bill last month as the first piece of legislation of their new majority. The bill is similar to legislation the Democratic House majority passed in 2019 and would implement national standards for ballot access and voting rights, as well as new campaign finance reforms.

And while the 2020 election has led to a massive push to restrict voting rights, it has generated an even stronger push to continue expanding them: Lawmakers nationwide have introduced more than 500 bills in at least 37 states that would bolster or expand voting access, the Brennan Center reported in February. Fewer than 200 such bills were filed last year.