Home » Politics » A Year After Charlottesville, Fewer People Are Worried About White Nationalism

A year after violent white supremacists marched in Charlottesville, Virginia, public concern about their ideology has ticked downward, a new HuffPost/YouGov survey finds.

Forty-six percent of Americans now say that white nationalism poses a somewhat or very serious threat to the country, down from 57 percent in a survey taken just after last year’s rally. In the latest survey, 35 percent say white nationalism poses little or no threat, and the remainder aren’t sure. (For comparison’s sake, a similar 46 percent of the public currently thinks the gang MS-13 poses a comparable threat to the nation.)

President Donald Trump took several days after the events in Charlottesville before condemning white supremacists and neo-Nazis, and later soft-pedaled his denunciation, saying, “You had a group on one side that was bad, and you had a group on the other side that was also very violent.” On the anniversary of the rally this year, he sent a tweet condemning “all types of racism and acts of violence.”

A 36 percent plurality of Americans in the new survey say they believe Trump personally supports white nationalism, with just 14 percent saying he opposes it. Another 24 percent say they don’t think he has strong opinions either way, with the rest unsure. 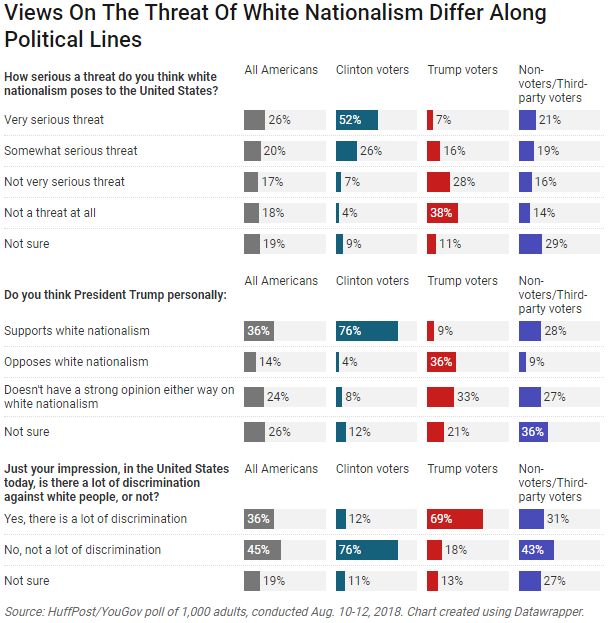 There’s also a significant divide on whether white Americans face a lot of discrimination: 69 percent of Trump voters, but just 12 percent of Clinton voters, think that they do.

Use the widget below to further explore the results of the HuffPost/YouGov survey, using the menu at the top to select survey questions and the buttons at the bottom to filter the data by subgroups:

The HuffPost/YouGov poll consisted of 1,000 completed interviews conducted Aug. 10-12 among U.S. adults using a sample selected from YouGov’s opt-in online panel to match the demographics and other characteristics of the adult U.S. population.

HuffPost has teamed up with YouGov to conduct daily opinion polls. You can learn more about this project and take part in YouGov’s nationally representative opinion polling. More details on the polls’ methodology are available here.