Home » Politics » Ali Noorani: Trump should let DACA recipients become citizens — it will benefit US and his election chances 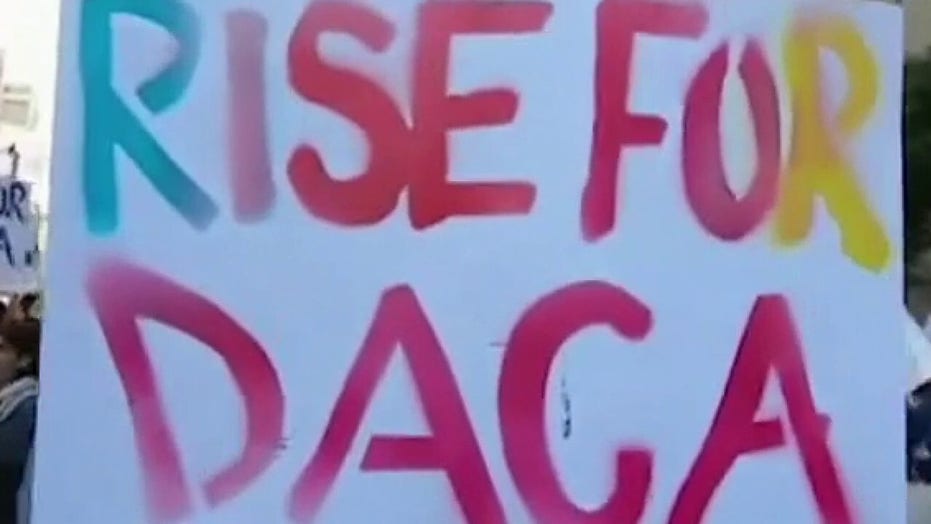 What will President Trump do about the DACA (Deferred Action for Childhood Arrivals) program, created by President Obama to allow children brought to the U.S. without authorization to remain here? The president has tried unsuccessfully to kill the program, but he said Tuesday he will somehow keep it alive — without giving us any details.

Trump would be wise to allow the 650,000 or so current DACA recipients, as well as other “Dreamers,” to stay in the U.S., and he should support action from Congress that would let them earn eventual citizenship. It’s in our national interest and in Trump’s own political interest.

In addition, saving DACA recipients from deportation is the only fair and just way to treat young people who grew up here, often have no memories of the countries where they were born, in many cases don’t speak the languages of those countries, and are making tremendous contributions to our country.

Over 200,000 DACA recipients are working to protect the health and safety of Americans as our nation confronts the coronavirus pandemic. Nearly 1,000 have served in the military. Hundreds of thousands serve in critical roles throughout our economy.

What exactly does that mean? That’s anyone’s guess.

“DACA is going to be just fine,” the president said in a rambling Telemundo interview Friday. In addition to calling for merit-based immigration in that interview, he said: “We're going to have a road to citizenship.” However, moments after the interview, in a sign of how his advisers see the issue, White House staff walked back Trump’s support for such a road.

Over  200,000 DACA recipients are working to protect the health and safety of Americans as our nation confronts the coronavirus pandemic

Trump campaigned for the presidency by attacking unlawful immigration and made construction of a border wall — which he falsely claimed Mexico would pay for — a central campaign promise. He tried to ignite fear of immigrants as dangerous criminals rather than portraying them for what they really are: hardworking people who benefit our country tremendously.

Candidate Trump also made conflicting statements about DACA recipients, sometimes praising them, sometimes demonizing them. With congressional action as their only path to permanent legal status, their lives and livelihoods have been at the whimsy of the president.

Facing a lawsuit from 10 conservative states, Trump first tried to end DACA in 2017. Lawsuits were filed to block the president’s action. On June 18 the Supreme Court ruled against the president, with Chief Justice John Roberts agreeing that the decision to end DACA was “arbitrary and capricious.”

The day before the Supreme Court ruled, Pew Research reported that “74% of Americans favor a law that would provide permanent legal status to immigrants who came to the U.S. illegally as children, while 24% are opposed.”

Support climbs to 91 percent of Democrats and Democratic-leaning independents, and reaches 54 percent among Republicans and Republican leaners.

Set aside the lives of these young people and their families. Even if the president only cares about his reelection, it is obvious that preserving DACA is the way to go.

But bowing to pressure from anti-immigrant advisers ignorant or scornful of what the American public wants, the president thus far has declined to accept the Supreme Court’s verdict and the uncertainty continues. Rumors swirl that he is looking for new ways to end DACA, despite his most recent comments.

In addition, U.S. Citizenship and Immigration Services is not processing new DACA applications. Given the Supreme Court’s ruling, it should be doing so.

At the same time, two of the president’s most valued bases of support have weighed in to give support to DACA recipients: the business community and evangelical Christians.

Dozens of CEOs and executives from America’s business community —  including the U.S. Chamber of Commerce, Amazon, General Motors, Target, Apple, Google and Facebook —  wrote a letter to the president Saturday in which they note the contributions of DACA recipients, including as frontline workers during the coronavirus pandemic.

“As large American employers and employer organizations, we strongly urge you to leave the DACA program in place,” members of the group wrote. “DACA recipients have been critical members of our work force, industries, and communities for years now, and they have abided by the laws and regulations of our country to maintain their DACA status.”

And evangelical leaders wrote to the president last week: "Consistent with your past comments affirming your concern and 'great love' for this population, we plead with you to work toward good-faith compromise that would both be compassionate to immigrants and respect the rule of law. As always, we are committed to praying for you and your administration, as well as for the immigrant individuals and families whose lives and livelihoods are directly affected by your deliberations."

In the face of these dynamics, the president has two options.

The better option would be for him to seize the opportunity to push for a realistic deal to allow DACA recipients to stay in America and eventually become citizens. That means leaving out unrealistic measures that derailed a deal in 2018, such as provisions to cut legal immigration severely. It means supporting bipartisan congressional efforts to compromise.

Congress can also act to protect Dreamers permanently. DACA recipients — and millions of their family members, friends, fellow churchgoers, colleagues and employers — have waited years for Congress to pass legislation and cement their contributions.

Trump’s other option is limited in both imagination and effect.

Those in the White House and on his reelection campaign who tell the president to focus on his base and end DACA are wrong, because the president’s base doesn’t have the votes to give him a second term. And Trump is a canny enough politician to know that politics is a game of addition, not subtraction.

Looking at all these factors, President Trump should stop going back and forth on whether he will allow DACA recipients to continue to contribute to our nation. Expelling these young people from the U.S. would be an act of cruelty, harmful to our national interest, and harmful to Trump’s reelection campaign.

As the son of an immigrant mother, the grandson of immigrants, and the husband of an immigrant, President Trump should understand that immigrants are vital contributors to our society. This includes DACA recipients. It’s long past time to make their dreams of becoming Americans come true.