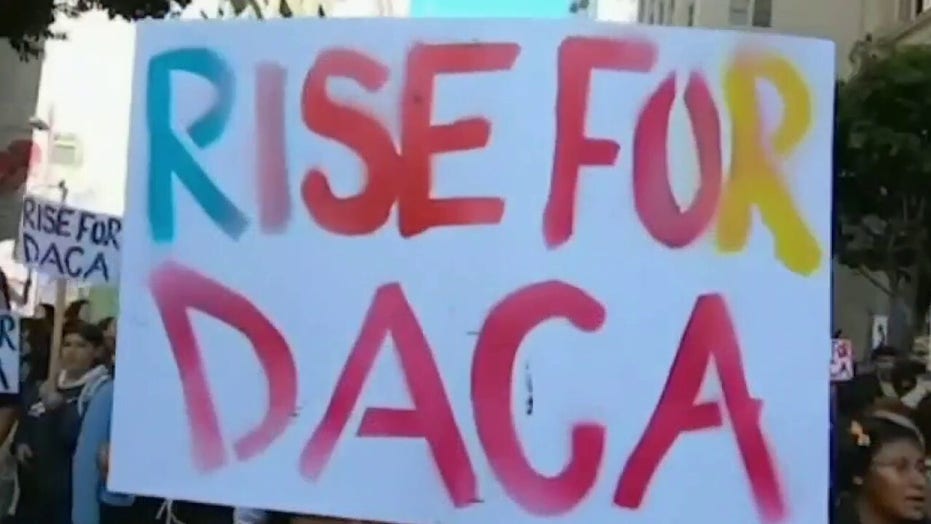 EXCLUSIVE: Democrats on Tuesday are renewing a push on a bill to give a pathway to citizenship for some illegal immigrants, including those who came to the U.S. as children and were protected by the Deferred Action for Childhood Arrivals (DACA) program – and conservative groups are urging Republicans not to play ball.

The Senate Judiciary Committee is holding a hearing on “The American Dream and Promise Act,” which would give a path to citizenship to millions of illegal immigrants who either came as minors, who were given Temporary Protected Status (TPS) or have deferred enforced departure (DED).

The hearing comes on the ninth anniversary of DACA – an Obama-era executive order that granted protection to some of those who came to the country as children. Former President Donald Trump sought to abolish the order, and that fight is still before the courts. However, this bill would not only enshrine the DACA protections but also expand the number of illegal immigrants given protection under it from the approximately 700,000 protected in 2012 to potentially millions who are eligible now.

A number of Republicans in both chambers have expressed openness to some form of permanent status for DACA recipients, often as part of a broader immigration agreement. A handful of House Republicans voted for the House version of the bill.

But conservative groups and immigration hawks are warning Republicans not to buckle under the pressure and to instead focus on the crisis at the southern border.

“This poorly timed hearing is an affront to the integrity of our immigration system, as well as the safety and security of the American people,” RJ Hauman of the Federation for Immigration Reform (FAIR), which advocates for lower levels of immigration, said in a statement to Fox News. “Democrats in both chambers have taken no initiative to address the border crisis and instead are worsening it with amnesty bills that incentivize migrants to come to the country illegally. All they’re concerned about is what to do for illegal aliens already here and the ill-named American Dream and Promise Act aims to ‘fix’ only that problem.”

“Senate Republicans must hold firm and not even entertain the thought of offering a handful of reforms that the Biden administration would eventually bend or ignore in exchange for a bill like this,” he said. “We expect them to make that clear today.”

Mike Howell, senior adviser at the Heritage Foundation, said that given the border crisis, “even debating amnesty at this moment of historic crisis is a mistake, because it sends a signal to the world that those who cross our borders illegally may eventually be rewarded with the greatest prize of all – American citizenship – in response to their lawbreaking.”

Meanwhile, John Zadrozny, director of the America First Policy Institute’s Center for Homeland Security and Immigration, accused Democrats of showing a “lack of fitness” to be in charge by promoting the bill “at this dangerous time in American history.”

“Talk of amnesty is both an insult to current American citizens and only going to fuel President Biden’s manufactured mess at the United States-Mexico border,” he said. “I would urge all congressional Republicans to make it clear to congressional Democrats that amnesty is D.O.A. and that our citizens and our security are the priority.”

So far, there has been little sign of movement from Senate Republicans, and even movement against such a bill due to the crisis at the southern border.

“This legislation stands zero chance of being passed by the Senate – zero. It combines some of the most radical proposals from the far left in one massive bill that fails to address the needs of our country,” he said on the Senate floor. “Rather than discuss the humanitarian crisis at the border, our Democratic colleagues have chosen to hold a hearing on a dead-on-arrival bill, and they know it.”

Cornyn said that while he supports helping DACA recipients who came to the country as children, the bill “has completely abandoned this justification in favor of rewarding recent illegal entries with green cards, even adults who violated our immigration laws.”

“These young men and women deserve certainty and Congress cannot pass legislation to provide that certainty if our Democratic colleagues and the White House insist on attaching controversial policies or ignoring the current crisis at the border,” he said.

But Democrats have indicated they wish to ramp up pressure on Republicans in the hopes of securing bipartisan support for the measure.

“I’m ready, it’s time. America’s ready,” Judiciary Committee Chairman Dick Durbin said Friday, according to Roll Call. “Overwhelmingly, Democrats, Republicans and independents support this idea. They believe it’s fair – it’s fundamentally fair – that these young people should have their chance to be part of America’s future. And we’re going to have this hearing to move in that direction.”