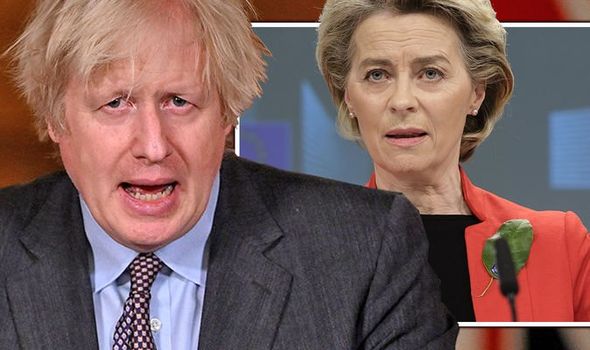 The Prime Minister and Commissions President are understood to have spoken on the phone at approximately 7pm.

No10 did not deny a phone call had taken place when approached for comment by Express.co.uk.

Their phone call came just hours after Ms von der Leyen suggested vaccines earmarked to be shipped from the continent to the UK could be blocked.

“We are in the crisis of the century,” the Commission President told reporters yesterday afternoon.

“We are exporting a lot to countries that are themselves producing vaccines and we think this is an invitation to be open, so that we also see exports from those countries coming back to the European Union.

“The second point that is of importance to us: we will reflect on whether exports to countries who have higher vaccination rates than us are still proportionate.”

The comments have increased tensions in what were already strained relations between the two sides.

Over the past 24 hours, UK ministers have sought to ease concerns Britain’s vaccination efforts could be jeopardised.

They have also sought to boost confidence in the AstraZeneca jab after comments made by countries on the continent risked damaging trust in the vaccine.