Banksy is making a powerful statement against systemic racism with his latest piece.

The British street artist depicted a shrine to an anonymous Black figure in the new artwork he posted to Instagram on Saturday morning.

In the image, a burning candle has set the American flag on fire.

Scroll across to see the full picture:

Banksy explained in a statement accompanying the image how “at first I thought I should just shut up and listen to black people about this issue.”

“People of colour are being failed by the system. The white system,” Banksy continued. “Like a broken pipe flooding the apartment of the people living downstairs. This faulty system is making their life a misery, but it’s not their job to fix it. They can’t — no-one will let them in the apartment upstairs.”

“This is a white problem,” Banksy concluded. “And if white people don’t fix it, someone will have to come upstairs and kick the door in.”

Protests have spread worldwide following the police killing of George Floyd in Minneapolis last week. Floyd, a Black man, died after a white police officer knelt on his neck for nearly 9 minutes.

Some 4,000 people are reportedly expected to attend a rally in Banksy’s home city of Bristol, in southwest England, later Saturday.

Banksy has used his art to tackle racism on multiple previous occasions.

In 2014, authorities in Clacton-on-Sea, Essex, erroneously believed his satirical commentary on immigration, below, contained “offensive and racist remarks” — and scrubbed the potentially valuable mural from the wall. 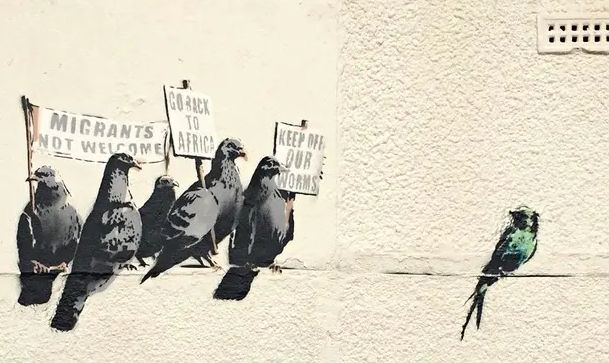 Banksy, who has never been officially identified, last month donated this painting to Britain’s National Health Service in honor of health care workers on the front lines of the coronavirus pandemic:

The piece, titled “Game Changer,” was almost stolen soon after being installed at Southampton General Hospital in southern England. It will be auctioned to raise money for health care charities in the fall.