Since August 2020, pensioners have been required to spend £157.50 a year to watch the BBC. The withdrawal of the free TV licence was announced by the broadcaster in 2019, despite it agreeing with the Government to take on responsibility for the perk in 2016.

Now, only those over-75 who claim pension credit are eligible for a free TV licence.

Many pensioners see TV as a lifeline, and since the free licence was scrapped campaign group Silver Voices has been taking action to try and force a U-turn.

Dennis Reed, Director of Campaigns at Silver Voices which represents over 60 year-olds, has said the group is planning to step up its campaign throughout 2021.

Telling Express.co.uk he was “reasonably optimistic” progress could be made on the issue he outlined how the strategy to place more pressure on Government after failing to make progress with the BBC. 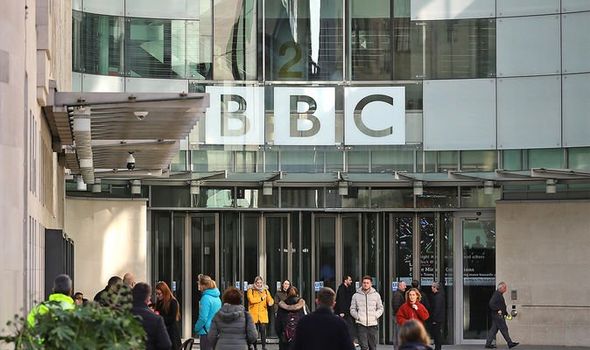 He said: “The BBC has obviously proved completely impervious to caving at it seems quite happy to bear the reputational damage that has been caused by the scrapping of the free licences.

“We’re still keeping the pressure up on the BBC by supporting all those over 75s who are refusing to pay the licence fee.

“We’re also still keeping the BBC TV licensing busy with our ‘Gum up the works’ campaign, so they know we’re still there and we’re keeping the pressure on, but it doesn’t look as if the BBC is going to change its mind despite all the campaigning, and all the public attention on the issue.

“We’ve now got to go back to the place which holds the ultimate responsibility, the Government.”

The “Gum up the works” campaign was launched last year as the group started to take “direct action” to try and force the BBC to back down on the issue of free TV licences.

Silver Voices told over-60s to cancel their direct debits for the licence fee payment and settle fees only by cheque in order to disrupt the payments system. 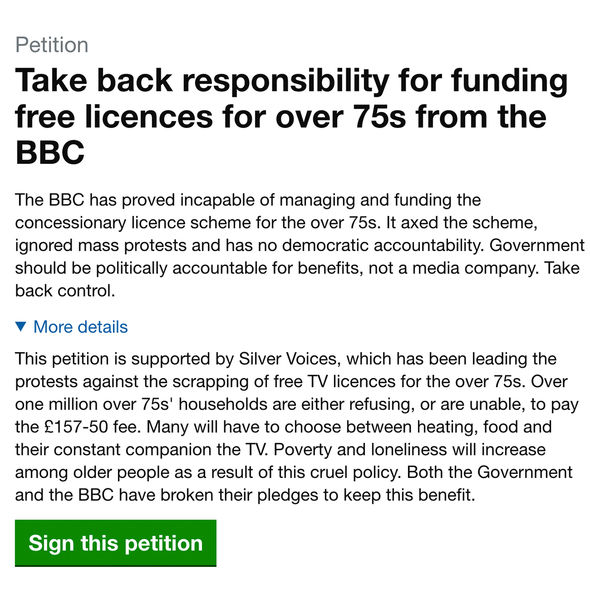 Turning attention to the Government, Silver Voices has launched an online petition to heap pressure on MPs and force them to intervene.

“We’re using the petition to try and change the focus,” Mr Reed said.

“It’s not the be all and end all, it’s simply to encourage the public to continue supporting the campaign to get the Government to change its mind.”

The online Parliament petition urges the Government to “take back responsibility for funding free licences for over 75s from the BBC”.

Before 2016 it was the Government’s responsibility to cover the cost of free TV licences, and Mr Reed hopes his campaign will force Ministers to take action – even if it means the Treasury once again covering the cost of the perk itself.

So far the petition has nearly 5,000 signatures. Once it has been signed by 10,000 people the Government is required to officially respond to the campaign, if it is signed 100,000 times it must be debated in Parliament by MPs.

Mr Reed added: “The more we can keep nagging away at it, the more the Government will see it is an irritant that they ought to resolve.

“It has caused the BBC great repetitional damage, the last thing the Government wants is for the public to turn on them too.”

Admitting it was “unfortunate” the campaign has so far failed to force a rethink on the issue he remained determined to win back free licences for the elderly. 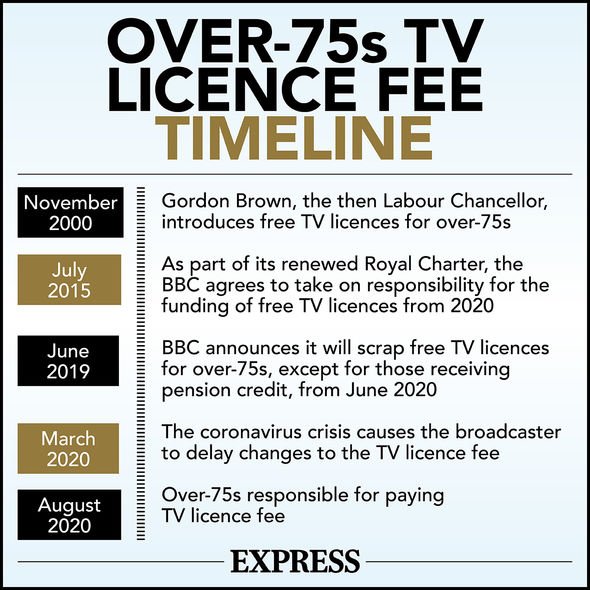 Defiantly and warning of further action to come, he said: “We’re not giving up the campaign at all.”

The BBC defended the decision to remove the free licences when the move was made.

It said at the time: “The fairest option is to help the poorest older pensioners.

“It is also the fairest option for all licence fee payers as this means everyone will continue to receive the best programmes and services that the BBC can provide.” 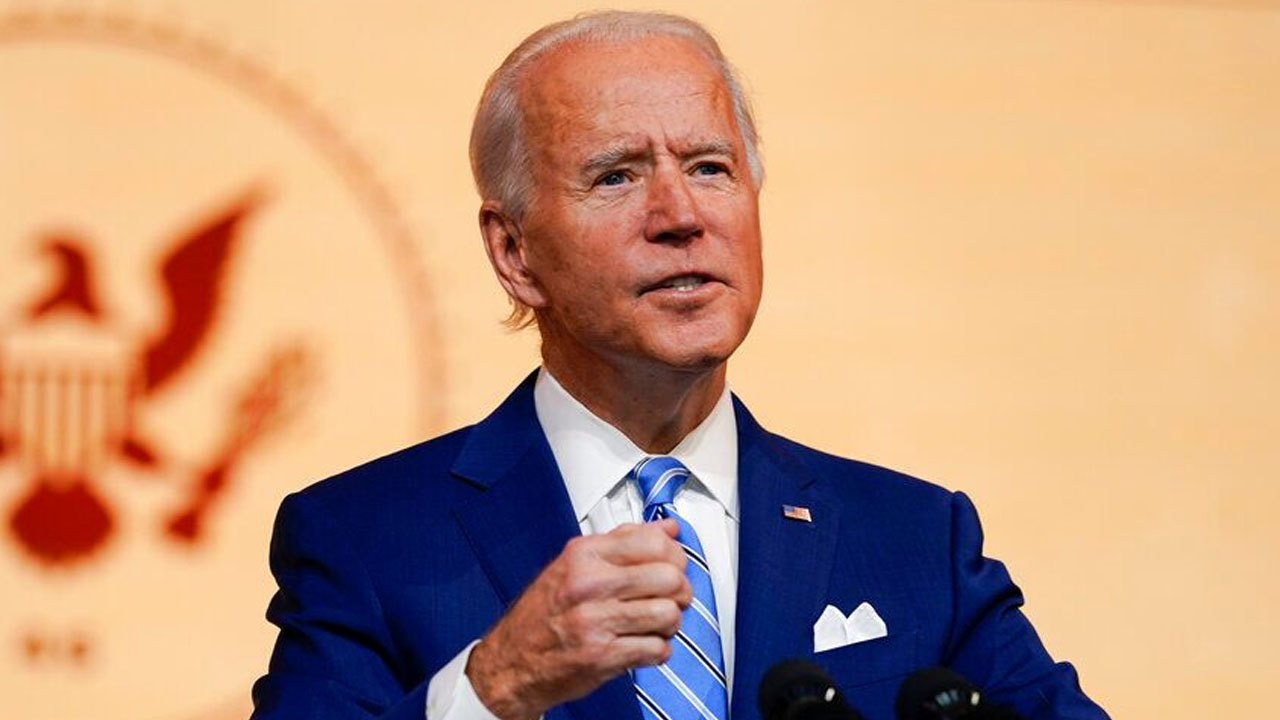 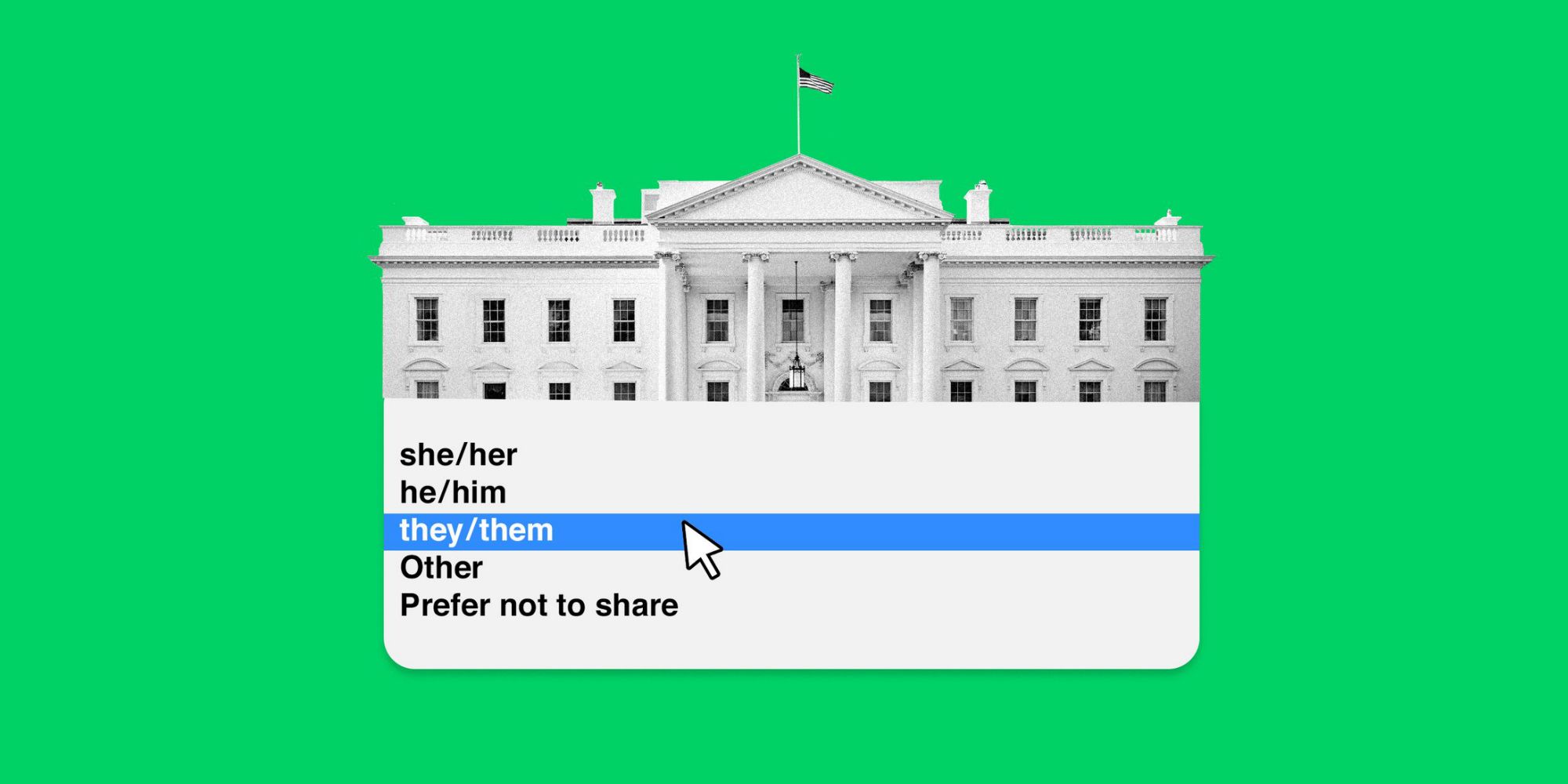