As potentially devastating hurricane and wildfire seasons loom, President Joe Biden’s administration announced Monday that it is setting aside $1 billion for communities to prepare for extreme weather events.

The announcement comes shortly after the National Oceanic and Atmospheric Administration (NOAA) revealed there is a 60% chance of an above-normal hurricane season, which typically runs from June through November.

“I’m here today to make it clear that I want nothing less than readiness for all these challenges,” Biden said from Federal Emergency Management Agency headquarters Monday.

The $1 billion, which will be allotted to communities, states and tribal governments, is “double the funding available from last year,” Biden added.

It will be part of the Building Resilient Infrastructure and Communities (BRIC) program, which “seeks to categorically shift the federal focus from reactive disaster spending and toward research-supported, proactive investment in community resilience so that when the next hurricane, flood, or wildfire comes, communities are better prepared,” the White House said in its announcement about the funding. 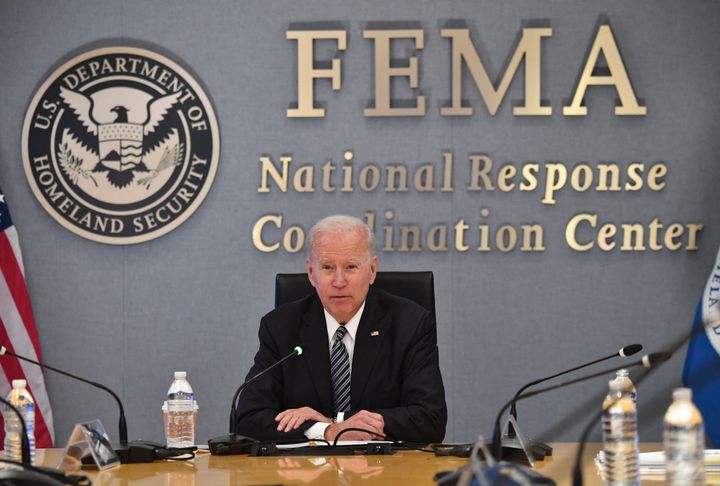 Biden’s Republican predecessor repeatedly blamed California for its wildfires, saying the blue state needed to clean its forest floors and threatening to withhold disaster funding ― despite forest floors having nothing to do with the wildfires and the worst of the blazes taking place on federally managed land.

Trump also dismissed the need to prepare for climate-related disasters, often denying the role rising global temperatures play in natural disasters and making head-scratching remarks. “It will start getting cooler. You just watch,” he said while surveying wildfire damage in California last September.

It has not started getting cooler. A few months after Trump’s remarks, NASA announced that 2020 had tied with 2016 as the warmest year on record.

In another bizarre response, Trump threw paper towels at suffering survivors of Hurricane Maria in Puerto Rico in 2017.

There are “a few lessons” to be learned from last year, Biden said Monday from FEMA headquarters, emphasizing the need to be realistic about what climate change has in store.

“Last year, as you all know, we faced the most named storms on record. Seven out of the 30 named storms alone claimed 86 lives and caused more than $14 billion in damage,” Biden said. “This year, NOAA is focusing on another severe season ― perhaps and God willing not as bad as 2020, but still quite bad. We all know that these storms are coming.”