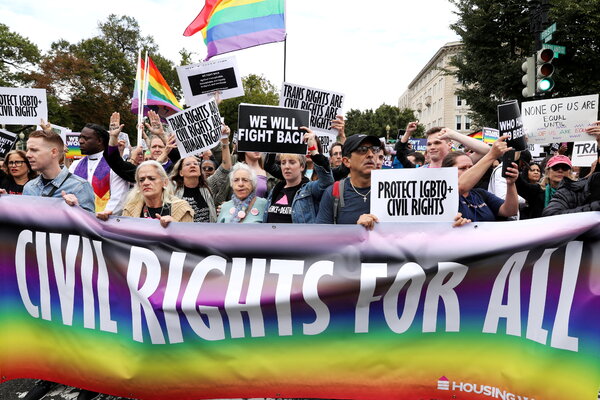 President Biden marked the International Day Against Homophobia, Transphobia and Biphobia on Monday by calling on dozens of countries — and half of the states in the union — to strengthen anti-discrimination protections for the L.G.B.T.Q. community.

“Both Covid-19 and rising authoritarianism around the world continue to widen economic, social and safety gaps for LGBTQI+ people — and an epidemic of violence still rages, with a particular impact on the transgender community,” Mr. Biden said in a statement commemorating the day, which takes place on the anniversary of the World Health Organization’s move in 1990 to declassify “homosexuality” as a mental disorder.

“Around the world, some 70 countries still criminalize same-sex relationships,” he said. “And here at home, LGBTQI+ Americans still lack basic protection in 25 states, and they continue to face discrimination in housing, education and public services.”

The number cited by Mr. Biden refers to states that do not offer basic safeguards against discrimination, according to a report by the Movement Advancement Project, a nonpartisan think tank that analyzes local and state L.G.B.T.Q. laws.

Human rights groups fear that many states are moving in the other direction, driven by the conservative culture-war politics of many Republicans allied with former President Donald J. Trump. Recently, Arkansas, Mississippi and Tennessee have imposed restrictions on transgender athletes in school sports, and Arkansas banned gender-affirming treatment for transgender minors.

In the past year, predominantly Republican state legislators have introduced more than 250 bills that sought to restrict activities or roll back protections, according to Human Rights Watch, an L.G.B.T.Q. advocacy group.

Mr. Trump also marked the holiday when he was in office, but he sent mixed messages as president.

In 2019, he delivered a speech calling on nations around the world “to stop criminalizing homosexuality,” and expressed solidarity with “L.G.B.T.Q. people who live in countries that punish, jail or execute individuals based upon sexual orientation.”

But he did little to back up those words with action. Some of the world leaders he viewed as most friendly to him, including President Jair Bolsonaro of Brazil — who once said he would rather have a dead son than a gay one — have been antagonistic to L.G.B.T.Q. rights.

Mr. Biden has sought to reverse all of those policies.