Home » Politics » Biden signs on to a bipartisan infrastructure compromise, but says it must be accompanied by a larger package.

For me, investment in our physical and human infrastructure are inextricably intertwined, both make us better off and stronger. The case for these investments is clear. Economists left, right and center, independent Wall Street forecasters, they all say that these kinds of public investments mean more jobs, more workers participating in the labor force, higher productivity and higher growth for our economy over the long run. Both need to get done. We need physical physical infrastructure, but we also need the human infrastructure as well. They’re a part of my overall plan. What we agreed on today is what we could agree on: the physical infrastructure. There was no agreement on the rest. We’re going to have to do that through the budget process. And we need a fairer tax system to pay for it all. I’m not going to rest until all — both get to my desk. I know there are some of my party who discourage me from seeking the agreement with our Republican colleagues, who said that we should go bigger and go alone. To them, I say this, I’ve already shown in my young presidency that I’m prepared to do whatever needs to get done to move the country forward. That’s what I did with the American Rescue Plan, which was $1.9 trillion. Let me say this. When we can find common ground, though, working across party lines, that is what I will seek to do. 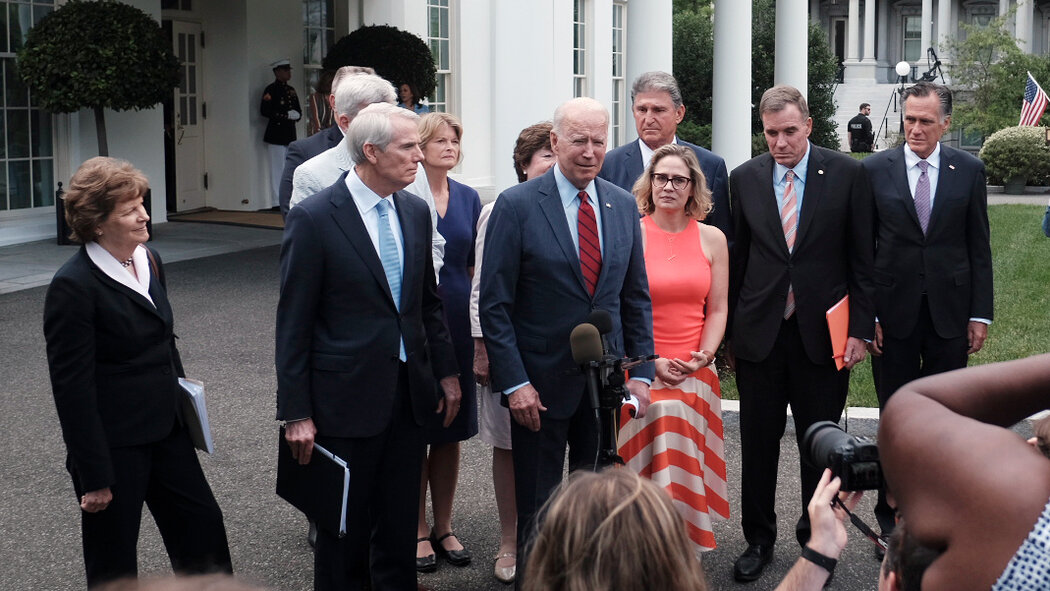 President Biden struck an infrastructure deal on Thursday with a bipartisan group of senators, signing on to their plan to provide about $579 billion in new investments in roads, broadband internet, electric utilities and other projects in hopes of moving a crucial piece of his economic agenda through Congress.

“We have a deal,” Mr. Biden said outside the White House, standing beside a group of Republicans and Democrats after a meeting in the Oval Office where they outlined their proposal. “I think it’s really important we’ve all agreed that none of us got all that we wanted.”

Mr. Biden’s endorsement marked a breakthrough in his efforts to forge an infrastructure compromise, but it was far from a guarantee that the package would be enacted. Both the president and top Democrats say the plan, which constitutes a fraction of the $4 trillion economic proposal Mr. Biden has put forth, can only move together with a much larger package of spending and tax increases that Democrats are planning to try to push through Congress unilaterally, over the opposition of Republicans.

“If this is the only thing that comes to me, I’m not signing it,” Mr. Biden said during remarks in the East Room of the White House. “It’s in tandem.”

Still, he signaled optimism about the success of the compromise, calling it a major win for his economic agenda, for America’s competitive stance against China and for democracy itself.