Biden has talked a good game about Putin, but has done nothing: KT McFarland

President Biden took questions Sunday after the conclusion of the G-7 summit in the United Kingdom.

Biden and first lady Jill Biden will then meet with Queen Elizabeth II at Windsor Castle.

The press conference comes after the leaders of the world’s richest countries have pledged more than 1 billion coronavirus vaccine doses to poorer nations, endorsed a global minimum tax on multinational corporations and agreed they will work together to challenge China’s “non-market economic practices” and to call on Beijing to respect human rights in Xinjiang and Hong Kong.

“President Biden and leaders agreed to a set of concrete actions around key priorities responding to forced labor in global supply chains, the ransomware threat, and fighting corruption,” the White House said in a statement Sunday.

“The United States and our G7 partners remain deeply concerned by the use of all forms of forced labor in global supply chains, including state-sponsored forced labor of vulnerable groups and minorities and supply chains of the agricultural, solar, and garment sectors — the main supply chains of concern in Xinjiang,” the statement continued. 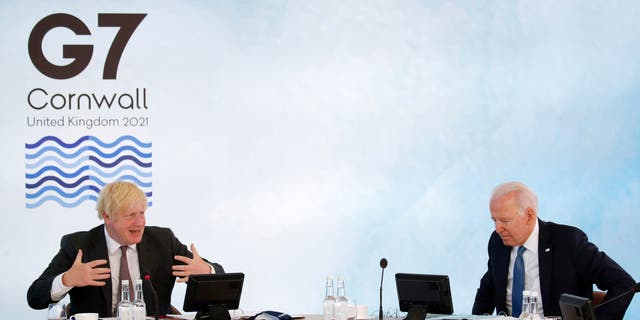 Beijing has been accused of imposing forced labor on an estimated 1 million Uyghurs and other minorities, as well as torture, forced birth control and family separations. The Communist Party has denied the allegations.

After the G-7 meeting ends Sunday, Biden will leave for Belgium and then Switzerland, where he’ll meet with Russian President Vladimir Putin.

Biden will hold a solo press conference in Switzerland after his meeting with Putin, the White House said Saturday.

Biden did a bilateral press conference with French President Emmanuel Macron on Saturday and did the same with United Kingdom Prime Minister Boris Johnson on Thursday.

Earlier in his term, he faced criticism for limiting access to the press. Biden held his first press conference as president more than 60 days into his term.