WASHINGTON – President Joe Biden is a big backer of renewed efforts to add the proposed Equal Rights Amendment to the Constitution but it remains to be seen if his administration will remove a barrier put up by his predecessor.

During the Trump administration, the Justice Department said Congress can’t revive the proposed amendment because the ratification deadline has expired.

This week, however, House Democrats are trying to do just that with a resolution that would repeal a 1982 ratification deadline set by Congress.

The resolution, which is expected to easily pass the House but will face a tougher road in the Senate, would declare the ERA to be part of the Constitution even though the final three states needed for ratification acted after the deadline. Last year, Virginia became the 38th state to ratify the amendment. 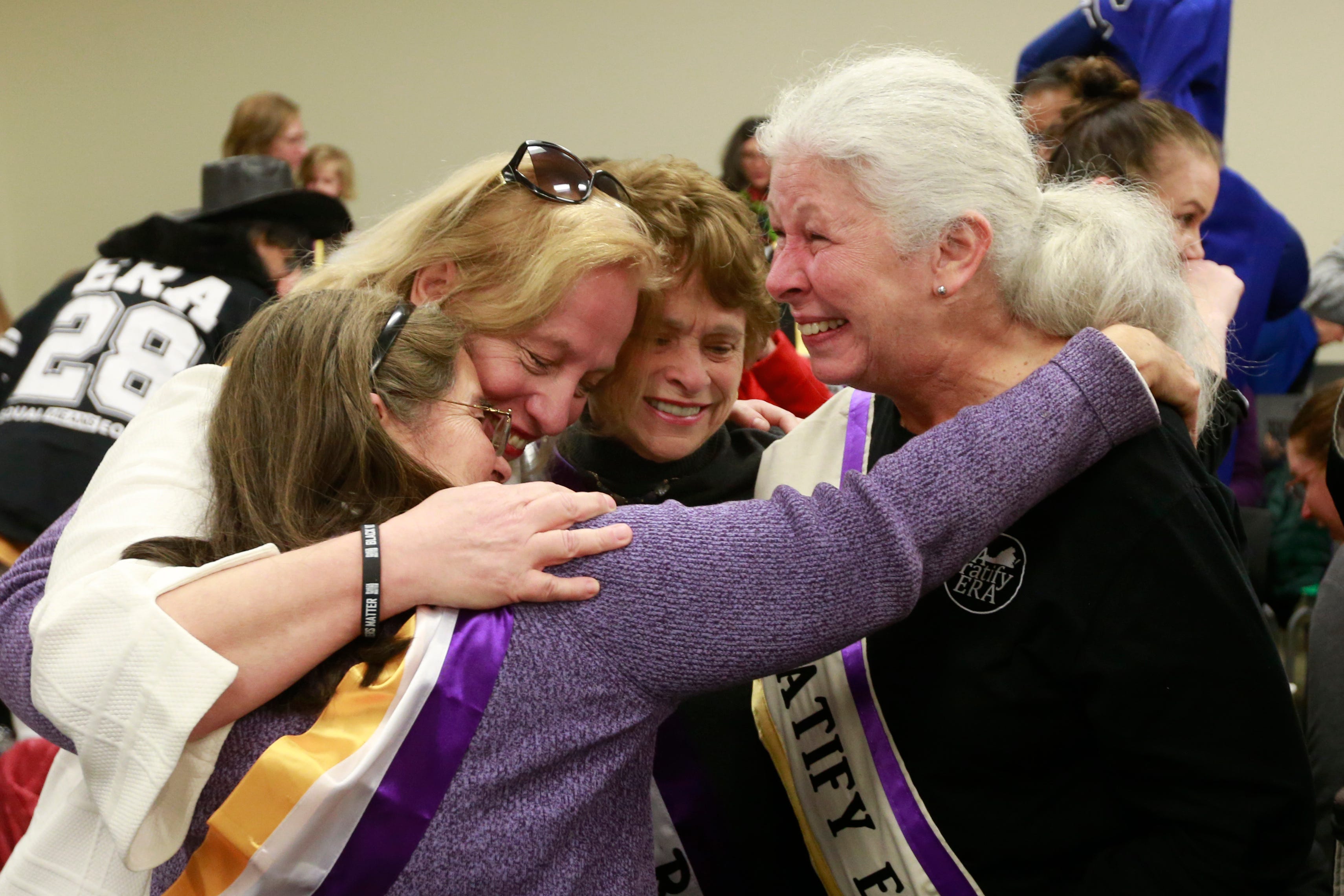 Supporters of the Equal Rights Amendment react to the Senate Privileges and Elections committee vote to report the ERA amendment the floor of the Senate during a Committee hearing at the Virginia State Capitol in Richmond, Va., Thursday, Jan. 9, 2020. (Photo: Steve Helber, AP)

Supporters say the ERA is a long-needed protection for women who face discrimination in the workplace and struggle against domestic violence and sexual harassment.

Opponents argue it’s an unnecessary amendment that would enshrine in the Constitution protections for abortion, voiding any federal or state restrictions.

Even if Congress declares the late actions by states are valid, that move will almost certainly be challenged in court.

The resolution flies in the face of the Justice Department’s current view that the only way to adopt the ERA is to start the process all over.

Asked if Biden will rescind that 2020 memo by the Justice Department’s Office of Legal Counsel, an administration official said Biden won’t dictate an outcome.

The official, responding on the condition of anonymity, said Biden remains committed to the ERA but respects the independence of the Justice Department. The House vote, the official said, is “the appropriate next step.”

A spokesperson for the Department of Justice declined to comment.

ERA supporters need a boost after a federal district court judge ruled this month that Virginia, Illinois and Nevada acted too late byapproving the amendment after 1982. (Nevada did so in 2017 and Illinois in 2018.) 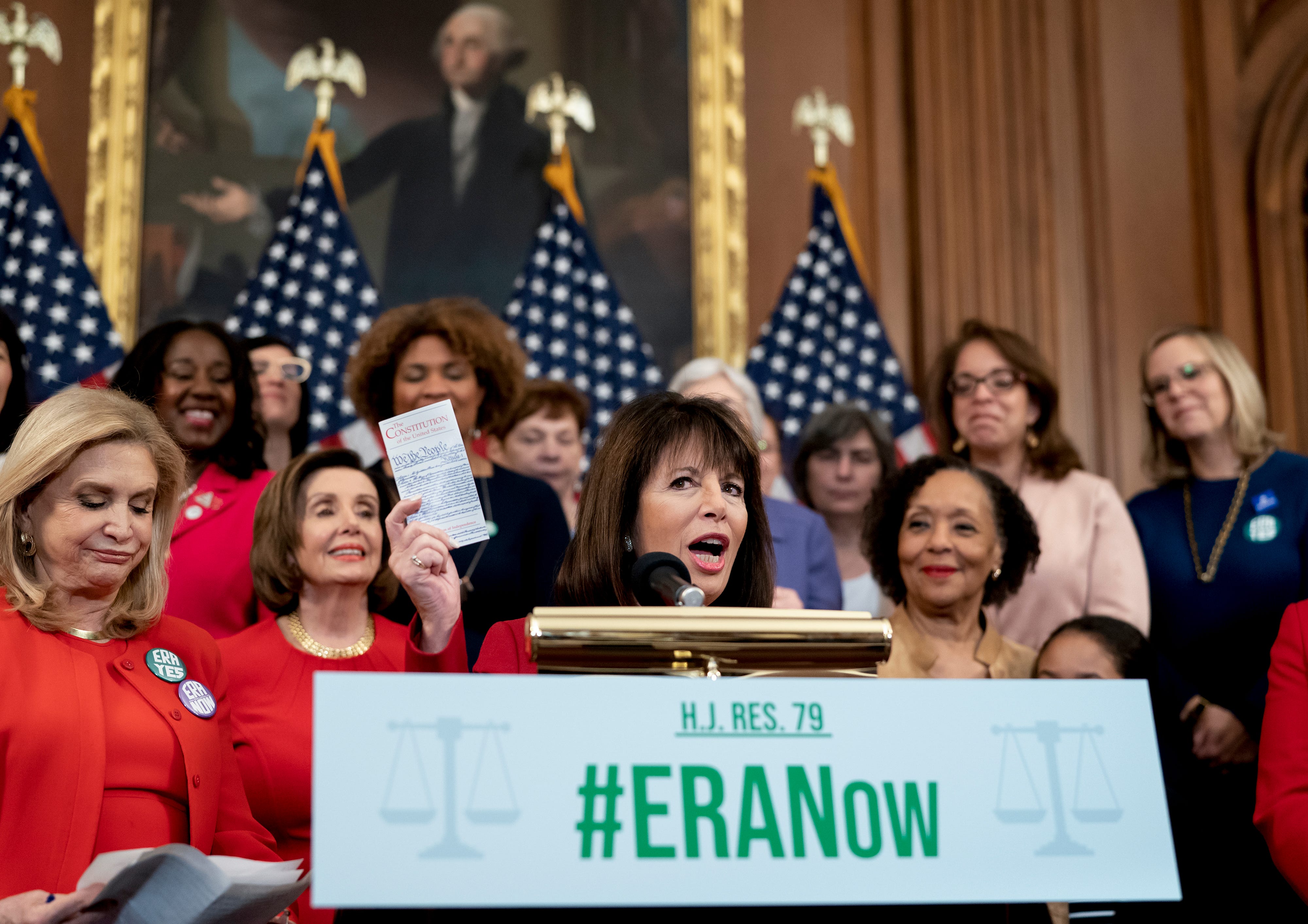 Rep. Jackie Speier, D-Calif., holds up a copy of the Constitution during an event about their resolution to remove the deadline for ratification of the Equal Rights Amendment. (Photo: J. Scott Applewhite, AP)

Those states unsuccessfully argued that the deadline is not enforceable because the Constitution doesn’t give Congress the power to impose one. They also argued that while the deadline was included in the introductory clause to the amendment, it was not in the amendment’s text that states approved.

U.S. District Judge Rudolph Contreras, who was appointed to the federal bench by President Barack Obama, ruled against the states on March 5.

“The Court will not pull the rug out from under Congress’s long-accepted practice of declaring ratification conditions in a proposing resolution’s preamble based on a technicality,” Contreras wrote.

The states could appeal the decision to the Supreme Court.

“While I do not believe that the arbitrary deadline Congress imposed on the Equal Rights Amendment is binding in any way, I welcome any support from both the Biden Administration and Congress in ensuring that this amendment is recognized as part of the Constitution once and for all,” Virginia Attorney General Mark R. Herring said in a statement when the case was dismissed.

No hints from Garland

Biden’s new attorney general, Merrick Garland, was asked about the issue during his confirmation hearing.

Garland declined to comment on whether he agrees with the prior Justice Department’s opinion, saying he couldn’t weigh in because the states’ legal fight was before the federal court and he was still a sitting judge. In general, Garland said, decisions on whether to withdraw an Office of Legal Counsel opinion would be based on a “careful attention to the facts and the law.”

During the presidential campaign, Biden said he “will proudly advocate for Congress to recognize that 3/4th of states have ratified the amendment and take action so our Constitution makes clear that any government-related discrimination against women is unconstitutional.”

“With President Biden and Vice President Harris at the helm, this will finally be the year we ratify the ERA to the Constitution,” California Rep. Jackie Speier, co-chair of the Democratic Women’s Caucus, said when reintroducing the resolution the House is expected to approve this week.

The measure is supported by two GOP senators, Alaska’s Lisa Murkowski and Maine’s Susan Collins. But it doesn’t have enough Republican support to avoid a Senate filibuster.

If adopted, the Constitution would state that “equality of rights under the law shall not be denied or abridged by the United States or by any state on account of sex.” 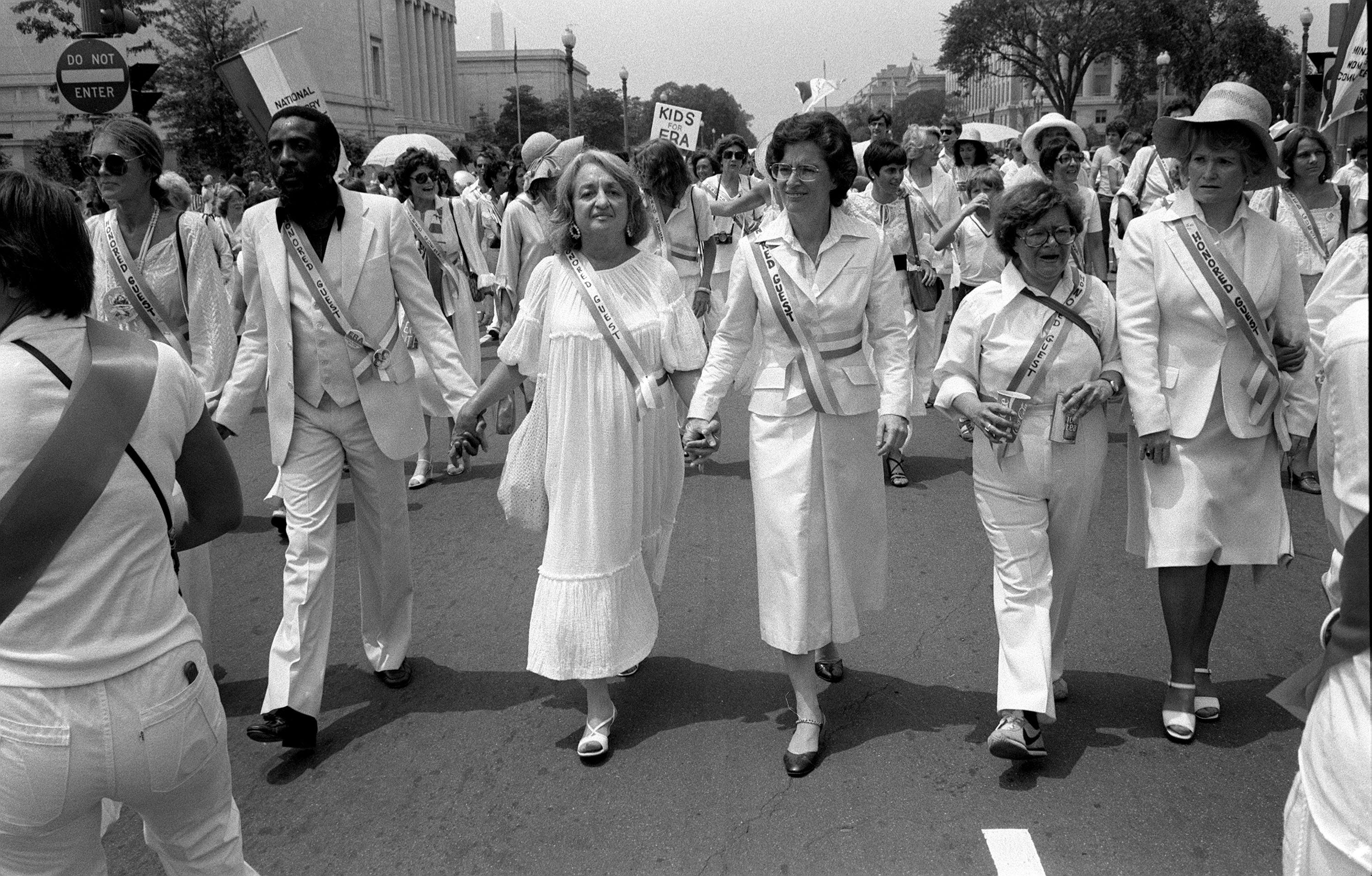 Leading supporters of the Equal Rights Amendment march in Washington on Sunday, July 9, 1978, urging Congress to extend the time for ratification of the ERA. (Photo: DENNIS COOK, AP)

Approved by Congress in 1972, the original 1977 ratification deadline was extended. But no additional states acted within the new time frame.

Abortion rights advocates have said the amendment is “more important than ever” because the Supreme Court’s conservative majority could overturn the 1973 Roe v. Wade decision that established a nationwide right to abortion.

“The ERA will help protect women’s rights to health care, including abortion,” says the narrator in a 2019 video from NARAL Pro-Choice America. “We can’t count on the Supreme Court to protect us.”

But Douglas D. Johnson, senior policy adviser for National Right to Life and director of its ERA Project, said the Constitution does not empower Congress to time travel back to 1972 to resuscitate a long-dead constitutional amendment.

Lawmakers are trying to do so, he said, because they know they can’t restart the ratification process without opening the amendment up to changes, including those that would be sought by abortion opponents. 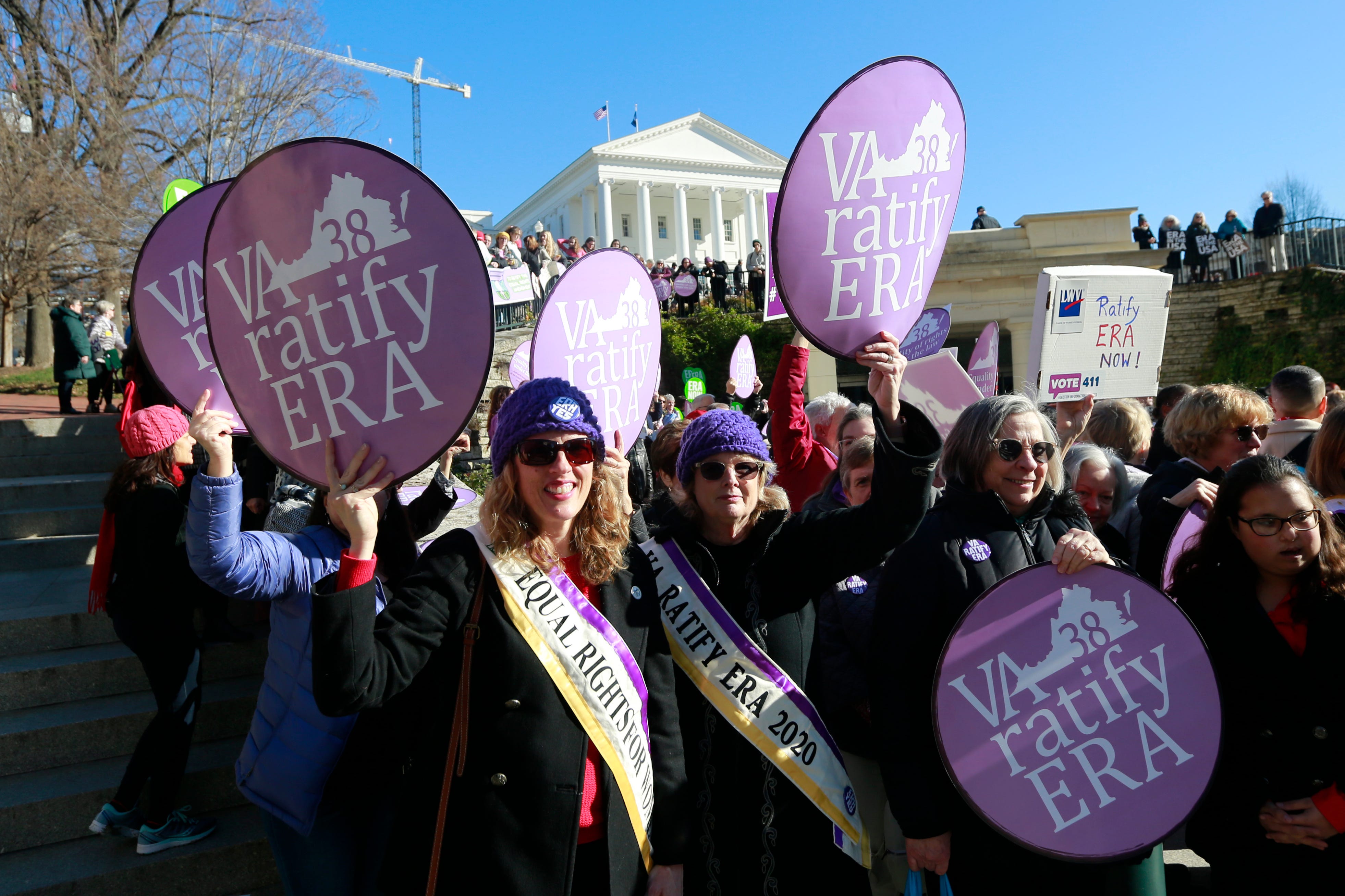 During a mid-February virtual gathering of ERA supporters, Linda Coberly, chair of the ERA Coalition Legal Task Force, said she wasn’t shocked that the new Justice Department hadn’t yet weighed in.

Nevada Attorney General Aaron Ford said during the mid-February event  he’s “optimistic that we will see a change in posture.”

“The timing clearly is up to the administration,” Ford said. “But I’m hopeful that it’s sooner rather than later.”

The late Supreme Court Justice Ruth Bader Ginsburg, who was a long-time supporter of the ERA, said last year that she would like the process to “start over” because of the controversy over the late ratifications.

She also noted that some states which backed the ERA have since rescinded approval, raising another legal question. Five states – South Dakota, Nebraska, Tennessee, Idaho and Kentucky – voted to withdraw in the 1970s.

“If you count a latecomer on the plus side,” Ginsburg said during an appearance at Georgetown University Law Center, “how can you disregard states that said, ‘We’ve changed our minds?'”