On Wednesday, dozens of prominent Black business executives released a joint statement condemning the wave of voter suppression measures in states across the U.S. and calling on major corporations to publicly oppose them.

The statement, coordinated by Merck CEO Ken Frazier, former American Express CEO Ken Chenault and the Black Economic Alliance, was signed by more than 70 executives who called on corporations to oppose “all measures designed to limit Americans’ ability to vote.”

“As Black business leaders, we cannot sit silently in the face of this gathering threat to our nation’s democratic values and allow the fundamental right of Americans, to cast their votes for whomever they choose, to be trampled upon yet again,” the executives said Wednesday. Their letter ran as an ad in The New York Times and coincides with increasing pressure on American businesses to take real action against racist voter disenfranchisement attempts.

Corporate America, the executives said, must “marshal its collective influence to ensure fairness and equity for all.” 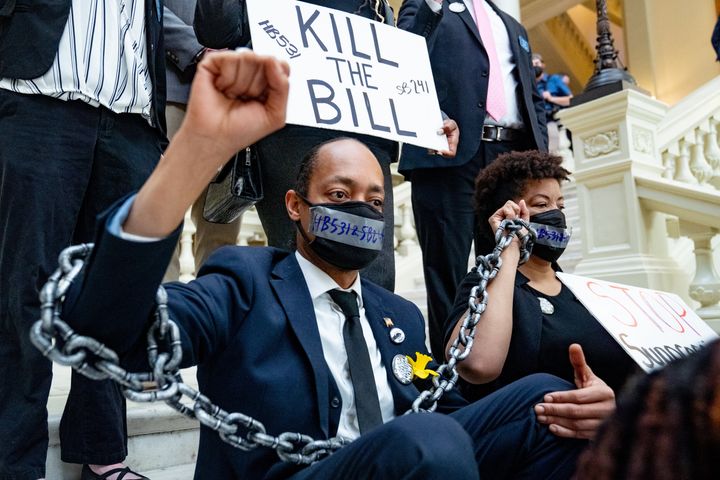 Just last week, Georgia Gov. Brian Kemp signed a bill into law that imposes new requirements to vote by mail, restricts the use of drop boxes and criminalizes people who give water or food to voters standing in line. Many of the most restrictive elements of the Georgia bill are also being pushed by Republican legislators in 43 states.

Voting rights experts and activists have compared the repressive policies to racist voter suppression laws enacted during the Jim Crow era because of their disproportionate impact on nonwhite voters, and last week, President Joe Biden called the Georgia bill “Jim Crow in the 21st century.”

In Wednesday’s joint statement, the group of Black executives said, “The disproportionate racial impact of these allegedly ‘neutral laws’ should neither be overlooked nor excused.”

Local activists and state officials have primarily driven the public campaign to hold corporations accountable while the business community largely lags behind.

For weeks, activists in Georgia have threatened to boycott several large, Georgia-based corporations ― including Coca-Cola, Home Depot and Delta ― if the companies don’t use their power to oppose voter suppression measures. On Wednesday, Delta’s CEO reversed course after Delta originally supported the bill. In a memo to employees, CEO Ed Bastian said the company now finds the bill “unacceptable” after “having time to now fully understand” what is in it.

By Wednesday afternoon, several other companies seemed to acknowledge the public pressure mounting and also released statements expressing some level of concern over the Georgia bill.

“I’ve seen these corporations falling over themselves every year around the time of the [Martin Luther] King holiday, celebrating Dr. King,” Warnock said. “And yes, I think that the way to celebrate Dr. King is to stand up for what he represented: voting rights.”