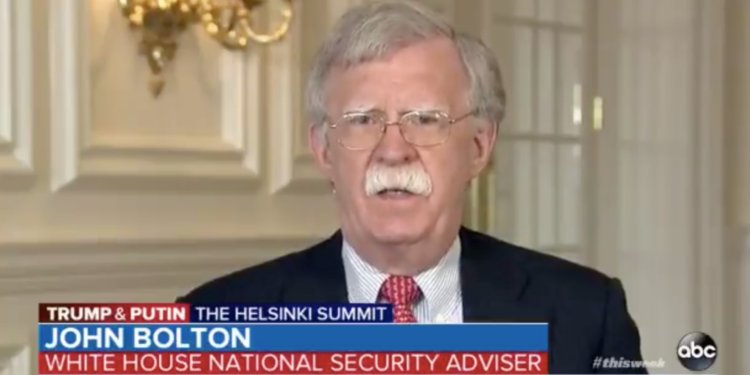 “[Trump] was perfectly prepared to have [the indictment] come before the meeting with Putin,” John Bolton said Sunday on ABC’s “This Week”. “I would say, in fact, it strengthens his hand.”

Bolton continued: “It shows that the justice system, the Department of Justice, are aware of these Russian efforts in election meddling, and I think the president can put this on the table and say, ‘This is a serious matter that we need to talk about.'”

Bolton’s comments come two days after the special counsel Robert Mueller brought charges against 12 Russian military intelligence officers, accusing them of hacking, aggravated identity theft, and money laundering — efforts to interfere in the 2016 US presidential election that Bolton said it was “hard to believe” Putin didn’t know about.

“That’s what one of the purposes of this meeting is, so the president can see eye-to-eye with President Putin and ask him about it,” Bolton said.

Trump has not condemned Putin since the indictments, instead tweeting on Saturday to blame former President Barack Obama’s administration for failing to respond in late 2016.

In an interview with CBS News Sunday morning, host Jeff Glor asked Trump if a possible response would include extraditing the 12 indicted Russian intelligence officers, Trump said he “hadn’t thought of that” but would mention to Putin.

Bolton said an extradition would be unrealistic because of legal restrictions.

“It’s pretty silly for the president to demand something that he can’t get legally. And this is a very serious matter,” he said told ABC.

Bolton continued: “The Russians take the position, you can like it or not like it, that their constitution forbids them to extradite Russian citizens. They have an agreement with the Europeans that looks a lot like an extradition treaty. Europeans, frequently, tried to use that to get the Russians to extradite their nationals and they flat out refused to do it.”

Top Senate Democrats urged Trump in a letter on Saturday to make “Russia’s attack on our election” a “top issue” and encouraged him to act on the advice of other federal agencies, saying “you must rely on the expertise and the experts of the State Department Defense Department, CIA and other US government agencies — not wing it on your own.”

The lawmakers also called on Trump to cancel the meeting entirely, or that there “must be other Americans in the room.”