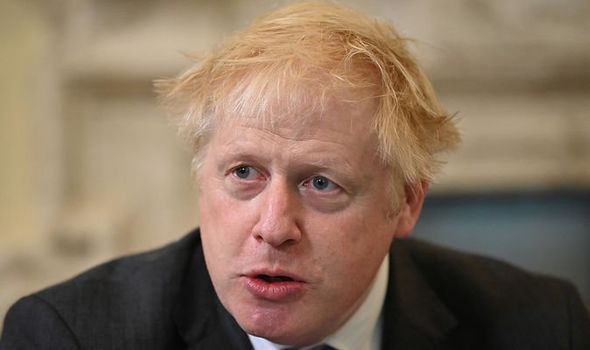 The Prime Minister’s blast came as campaigners brought mayhem on the M25 for a fourth time.

Police arrested 41 climate activists from Insulate Britain after they caused disruption at three locations on the UK’s busiest motorway.

Previous protests this month led to major delays and a large number of arrests.

Amid growing public fury Mr Johnson insisted it is right that police have powers to swiftly deal with the protesters and move them off public highways.

Mr Johnson, who will push his climate agenda during a three-day visit to the US, added: “I think that what they do is detracting from a very important moral mission that is widely shared Joe [Biden] by the people of this country.”

“It’s completely counterproductive as well because they’re actually creating the pollution they want to get rid of by having cars standing still, so there’s no justification for that kind of action,” he said.

“The police will have to work out their approach and tactics, but it’s not right for our roads to be blocked for illegal protests like this to take place, and for it to happen repetitively.

“I’ve no doubt at all the police will want to learn from their experience and make sure they’re able to step in more quickly and efficiently.”

Insulate Britain, which is calling for government action on home insulation, said blue paint had also been poured on to the road during the protest at the M25, “leading to further disruption”.

One of the protesters, who did not want to be named, told BBC Three Counties Radio the blockade had been about “the millions of lives we are going to lose not just here, but everywhere, if we don’t do anything”.

He said: “The scale of what is coming with the climate crisis forces us to take action.

“The measures are disruptive and they unfortunately have to be. This is no fun doing this. We are running rapidly out of time.

“We are stepping up because the government is critically failing.”

He said further blockades were planned and that protesters were willing to go to prison to make their point.

In a letter to Highways England, Insulate Britain said it was “entirely proportionate to create disruption” to keep the government to “its legal obligation of staying below 2C”.

Prior to the protest, the group had also called for Highways England to reduce the speed limit on the M25 ahead of the blockade.

Ch Supt Nick Caveney of Hertfordshire Constabulary, said: “Protesters have made it clear that they intend to continue causing disruption.

“Not only is purposely blocking a highway incredibly dangerous, it also affects thousands of members of the public who are stuck in delays as a result.”