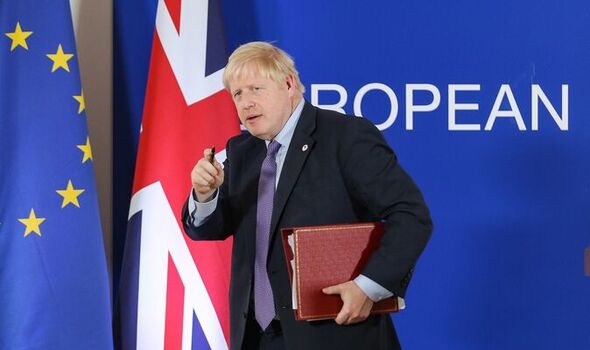 At a secret meeting, the Prime Minister discussed a proposal from backbench Tory MPs for a parliamentary Bill unequivocally confirming that Northern Ireland is an integral part of the UK. They want legislation drafted to clarify the province’s constitutional status included in the Government programme set to be announced in next month’s Queen’s Speech. But going ahead with such dramatic unilateral action to end the long-running row is almost certain to provoke fury in Brussels.

A source present at the meeting said the Prime Minister was attracted to the idea and agreed to further discussions about the plan.

“Bold strokes are painted with broad brushes,” the source told the Daily Express.

“It is important that the Prime Minister takes the opportunity to use the 80-seat majority he has for the benefit of the Union.

“The desire to preserve and strengthen the Union runs right across the Conservative Party – far deeper and more important than any differences on policy.”

Mr Johnson held a breakfast meeting in Downing Street on March 31 with the MPs, members of an 80-strong Tory backbench group campaigning to strengthen the historic ties between the four parts of the UK.

In a judgement last month, the Northern Ireland Court of Appeal declared that the protocol “subjugated” key clauses of the 1800 Act of Union.

The MPs, members of the Conservative Union Research Unit, want the Prime Minister to act to clear up the ambiguity. They overwhelmingly want the Government to scrap customs checks on movements of goods across the Irish Sea.

A briefing note from the meeting seen by the Daily Express called for “lawful, reasonable primary legislation” to “preserve the integrity of the UK.”

But it has led to more than two years of squabbling between London and Brussels as well as triggering anger among Ulster’s Unionist community.

Ministers accuse Brussels of imposing excessive checks on goods entering the province from other parts of the UK.

Mr Johnson has repeatedly threatened to trigger Article 16 of the protocol to unilaterally suspend customs checks.

But MPs supporting the Conservative Union Research Unit say that course of action would herald another round of wrangling with Brussels that could drag on for up to two years.

Instead, they want the Prime Minister to legislate to spell out that Northern Ireland is a full part of the UK.

Government sources indicated last week that legislation to effectively tear up the protocol was possible.

At a news conference during his visit to India last week, the Prime Minister said “of course” in response to questions about whether he could legislate to try to resolve the row.

“The protocol really does not command the confidence of a large, large component of the population in Northern Ireland. We have to address that, we have to fix that,” he said.

“We think we can do it with some very simple and reasonable steps.

“We have talked repeatedly to our friends and partners in the EU. We will continue to talk to them.

“But as I have said many times now we don’t rule out taking steps now if those are necessary.”

The Conservative Union Research Unit has kept a low public profile but is highly influential within the Tory parliamentary party.

It is led by Aberconwy MP Robin Millar with former Cabinet minister Dame Andrea Leadsom chairing an advisory board including members of both the Commons and the Lords.

Around two thirds of the group joined the Commons at the last general election in 2019.