Senior Tories have been bracing for defeats in Wakefield in West Yorkshire and Tiverton and Honiton in Devon. 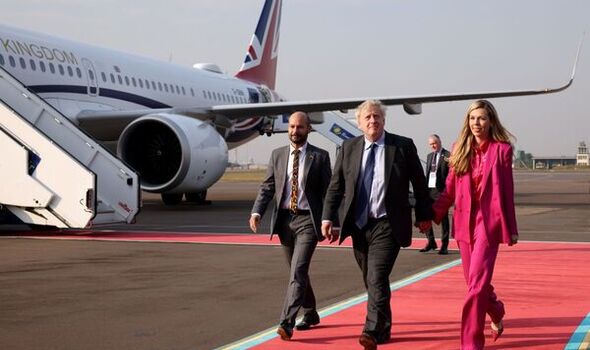 But as voters in the constituencies cast their ballots yesterday, the Prime Minister said he would be “crazy” to resign if his party failed to cling on to both seats.

Speaking to journalists while in Rwanda for a major Commonwealth summit, Mr Johnson was asked if he would quit No10 if voters turned against his party.

He replied: “Come on, it was only a year ago that we won the Hartlepool by-election, which everybody thought was – you know, we hadn’t won Hartlepool for – I can’t remember when the Tory Party last won Hartlepool…a long time.

“I don’t think it ever had.

“Governing parties generally do not win by-elections, particularly not in mid term. You know, I’m very hopeful but, you know, there you go. That’s just the reality.”

Pressed on whether he would quit if the Tories lost both seats, he added: “Are you crazy?”

Election guru Sir John Curtice has warned that a double defeat would put the Government at risk of losing its electoral footing.

Sir John said the number of Labour supporters willing to lend their vote to the Liberal Democrats in Tiverton and Honiton would be vital. The Tory candidate is Helen Hurford, while the party has put forward Nadeem Ahmed for the Wakefield seat.

Earlier this week, Mr Johnson accused the Lib Dems of being the enablers and acolytes of Labour and branded them “the karma chameleons of politics”.

Labour is expected to take back Wakefield, which was won by the Tories in 2019 for the first time since 1932 with a 3,358 majority.

Former Tory MP Imran Ahmad Khan was jailed in May for sexually assaulting a 15-year-old boy.

In Tiverton and Honiton, Neil Parish, the Tory MP since 2010, resigned after admitting he had watched pornography on his phone in the House of Commons.

He claimed he had been searching for tractors.

The Lib Dems were hoping to overturn a majority of nearly 25,000. The constituency has always had a Conservative MP since it was created in 1997.