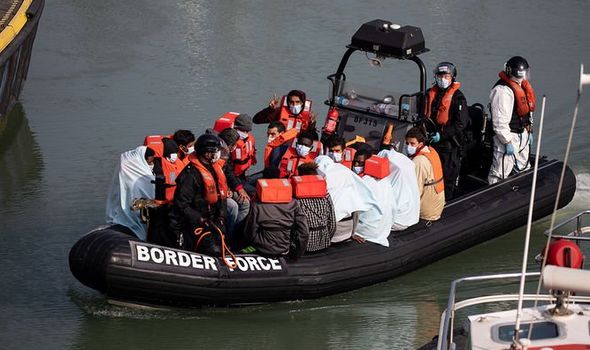 The prime minister and home secretary Priti Patel are under mounting pressure to stop illegal entry to the UK via the Channel, with more than 30 Conservative MPs writing to Mr Johnson to push him to bring forward a “decisive” plan.

Warning of pressure in their constituencies, they say that voters and MPs are “mystified” why “more isn’t being done”.

The letter, organised by the “common sense” group of Conservative MPs, states that “law-abiding Britons are increasingly frustrated at ever-worsening incidents of Channel crossings and perplexed by the apparent lack of an urgent Government response”.

The MPs are concerned that “Britons’ belief in the entire asylum system is waning” and call for a new “system of accommodation and deportation” to “deal with the many thousands of foreigners now illegally residents in our islands, the number of which will inexorably rise without comprehensive action both at land and at sea”.

The MPs welcome tougher measures included in the Government’s Nationality and Borders Bill but call for the acceleration of plans for the “offshore processing of asylum claims and dedicated, purpose-specific reception centres”.

As well as pressing for a faster deportation process, they want reform of the Human Rights Act so it is not used to “game” the asylum system.

They remind the PM the Government was elected to “take back control” and claim that Australia and Greece have demonstrated that “removing the allure of mainland accommodation deters illegal travellers from setting sail”.

The Government says the Nationality and Borders Bill will deliver “the most comprehensive reform in decades to fix the broken asylum system”. It says it wants to “better protect and support those in genuine need of asylum” while “breaking the business model of criminal trafficking networks” and removing “those with no right to be here”.

We will increase the maximum sentence for people smuggling to life

But Tim Naor Hilton, chief executive of Refugee Action, called for the Bill to be ditched.

He said: “The Government’s ‘anti-refugee Bill’ is pure political theatre built on a deep lack of understanding of the reality of refugee protection. Its measures focus entirely on how to keep people out rather than how to keep them safe.

“It will lead to an unworkable, unlawful and expensive disaster that will do nothing to stop refugees risking their lives in the Channel. If MPs truly want to smash the criminal gangs and commit to protecting those seeking safety, they should throw out this extreme and nasty Bill and create more routes to safety, such as family reunion schemes and a long-term resettlement programme.”

Minister for Immigration Compliance and Justice Chris Philp said: “Our New Plan for Immigration is the only long term solution to fix the broken system, tackle criminal gangs and prevent further loss of life and we are working tirelessly to implement it.

“Through the Nationality and Borders Bill we will make changes so that how someone arrives in the country will impact their asylum claim and we will increase the maximum sentence for people smuggling to life. These changes will break the business model of people smugglers and other measures will cut down on the potential for abuse of the system and allow us to remove people with no right to be here quicker.”