Cheers erupted after Mark Francois stunned the House of Commons by dismissing the hopes of a second referendum or Article 50 revocation. Members of Parliament took part in a series of indicative votes that allowed them to choose a multitude of Brexit options on Wednesday night. MPs were unable to come to a majority however as all eight alternative Brexit options were rejected.

“I think the public will look in on these proceedings with utter amazement and they will be completely bemused by what has gone on.

“This attempt to seize the order paper has failed. 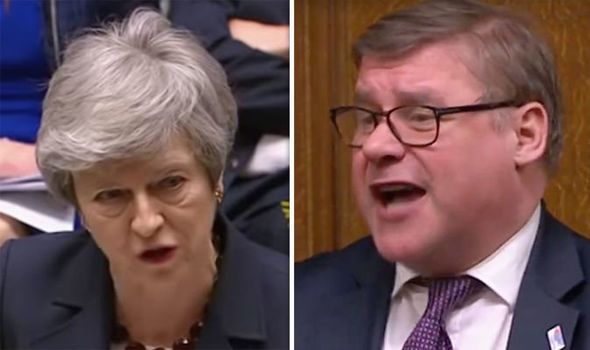 “The second referendum has been defeated.

“The revocation of Article 50 was smashed.

“And surely the last thing we want to do Mr Speaker, in the eyes of the public, is on Monday go through this farce all over again.”

This has helped strengthen the possibility of Theresa May’s deal passing through Parliament if she decides to bring forth a third “meaningful vote.”

Ahead of the Wednesday night Brexit votes Theresa May announced that she would resign from Prime Minister after her Brexit deal was implemented.

Mrs May garnered support from unlikely Brexiteers and Tory MPs, most notably Boris Johnson who claimed that he would vote for the Prime Ministers deal after her announcement that she would resign once Brexit was over the line.

In Mrs May’s speech, she said: “I am prepared to leave this job earlier than I intended in order to do what is right for our country and our party.

“In the second phase of the Brexit negotiations and I won’t stand in the way of that.”