A crusade by Sen. Jeff Flake (R-Ariz.) against government pork has targeted a different source of protein: bugs.

The boutique edible insect industry is trying to get more people to eat crickets, grasshoppers, ants and other creepy crawlers as sustainable alternatives to beef and chicken, and federal grants have helped the industry make this idea more palatable for consumers. Since 2013, two companies have gotten more than $1.3 million from the U.S. Department of Agriculture to research the nutrition and safety of using crickets and mealworms as food sources. That’s an ant-size sum compared with the federal budget overall but apparently enough to attract Flake’s ire.

“If most were asked to volunteer to eat a bug, the response is likely to be [the sound of] crickets,” he said on the Senate floor Thursday. “Insect-based food development won’t be stomached well by taxpayers.”

Flake has proposed an amendment to a spending bill covering the USDA and three other agencies that would block any money from going to insect farming. According to his office, the amendment will likely be included in a package of amendments agreed to without debate by both parties. The current grants are distributed through the USDA’s Small Business Innovation Research program; Flake’s amendment would stop all USDA money from going to bugs.

Insect farmers say that would cut off valuable research dollars just as the industry is taking off. As the world’s population increases and resources for agriculture become scarcer, insects could help meet food needs.

A 2013 report from the United Nations Food and Agriculture Organization said insects offer a promising source of protein despite a “degree of distaste for their consumption” in some Western countries. (Outside the United States and Europe, bugs are not uncommon as food.)

“This goes beyond an assault on insect farming,” said Bill Broadbent, the president of EntoMarket, an online store that sells edible insect and arachnid items, from powders and snacks to zebra tarantulas and hornet larvae cooking sauce. “When my kids are my age, there will be half again as many people on our planet, and meat production will need to double, which is not possible.” 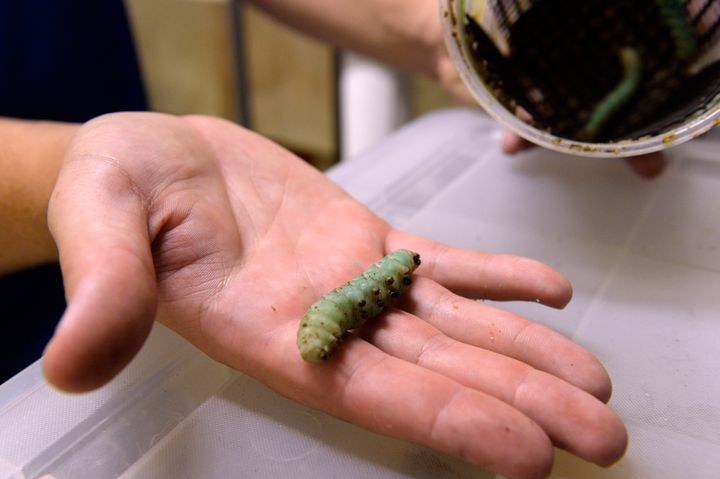 Insect farmers acknowledge that their industry faces an uphill battle: Adventurous eaters may be ready to try a protein bar made with dried ground crickets, but bugs will likely never compete with chicken or beef. Still, insect farmers say, that doesn’t mean the U.S. should stop researching bugs’ potential.

Sonny Ramaswamy, who headed the USDA’s National Institute of Food and Agriculture from 2012 until May of this year, said the goal of the agency, which includes the Small Business Innovation Research program, is to “solve societal and agricultural problems” ranging from nutritional deficits to climate change.

“The government is not out to get people to eat more crickets … The government’s role is to fund projects that will benefit the human condition,” said Ramaswamy, who has advised the edible insect industry. “There’s no need for this amendment. It’s pretty dumb.”

Compared with cows and pigs, bugs pack much more protein in a smaller carbon footprint. The U.N. FAO said that cricket protein requires 8 percent of the land needed to produce the same amount of beef protein and that, compared with crickets, 22,000 times as much water is needed to obtain an equal amount of protein from cows. Even if insects are not used for human consumption, many see a bright future in using bugs to replace carbon-intensive feed for livestock.

Kelly Sturek, a co-founder of the Nebraska-based BugEater Foods and a recipient of a USDA grant to make macaroni, rice and ramen noodles out of dried crickets, said the funding helped his company prove there was a nutritional future for cricket powder in more traditional foods.

More than that, he said, federal backing “helped so people weren’t always looking at us as weird but as a solution to a problem.”

“I think we’ll be sending Sen. Flake a strongly worded letter and a package of some of our products,” Sturek said. “I’d like him to try it and see just how the money was spent.”