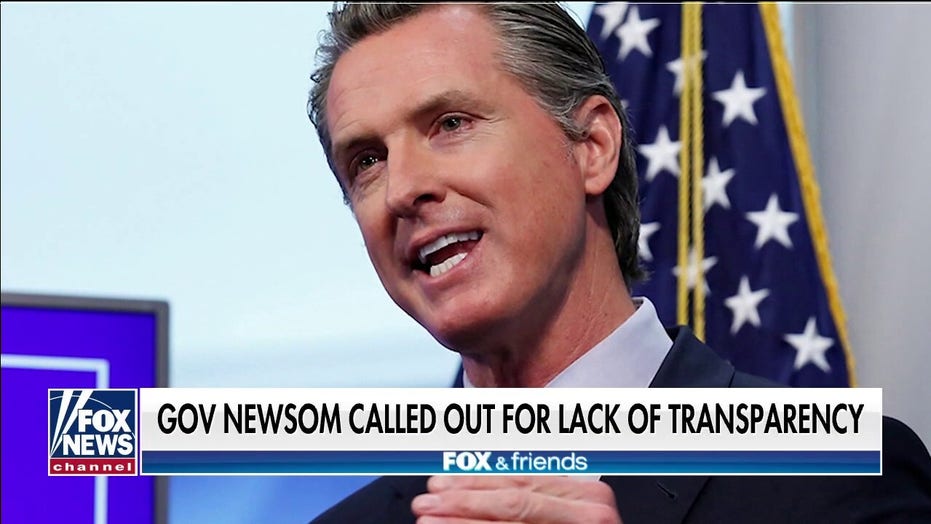 Gov. Newsom called out for lack of accessibility as recall effort gains steam

A California lawmaker is urging teachers in the state to opt-out of paying their dues because they inevitably go toward funding Democratic causes and helping Gov. Gavin Newsom fight a recall.

Kevin Kiley, R-Rocklin, tweeted Sunday that teachers have a constitutional right to opt-out if they so choose and offered resources that will help walk them through that process.

Kiley told Fox News he felt compelled to help teachers who are frustrated by Newsom’s closure of schools in response to the pandemic. He said he’s spoken to many teachers who want to be back in their classrooms but “are being barred from doing so by their union or by the governor himself.”

“I was simply pointing out that you as a teacher, have a very powerful tool available to you, and that is to deprive the massive unions that control the governor of their source of power, which is their funding,” Kiley said. “That’s an option that is, at least in theory, available to every teacher, although California’s politicians have tried to make that very difficult.”

Kiley said this was especially important for teachers to know, given that there is a recall of Newsom on the horizon and the California Teachers Association (CTA) – one of the most powerful teachers unions in the country – “will spend millions to defend them like they spent millions to elect him.”

Reached by Fox News for comment on Kiley’s allegations, the CTA called them a “nothing story.”

Newsom’s early response to the pandemic was widely praised, but his favorability ratings have plummeted in recent months as his draconian lockdown measures took their toll on businesses and children’s mental health.

The state has seen tensions simmer throughout the pandemic particularly between elected leaders and teachers unions over whether to resume in-classroom learning.

While other states have resumed some classroom instruction, California’s 10,000 public schools have mostly been closed since the beginning of the pandemic. As most of the state’s 6 million public school students approach a one-year anniversary of distance learning, frustrated parents are grappling with the toll of isolation and intense screen time on their kids’ well-being.

The U.S. Centers for Disease Control Prevention has said there is little evidence of spreading the infection at schools when proper precautions are taken. Still, the teachers unions won’t send their instructors back to the classroom unless they are 100% vaccinated. 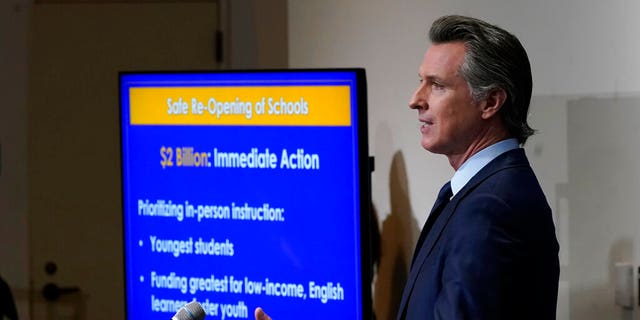 FILE: California Gov. Gavin Newsom outlines the safe re-opening of schools while speaking about his 2021-2022 state budget proposal during a news conference in Sacramento, Calif.
(AP)

Newsom has said he will not force public schools to reopen but instead wants to “incentivize” them and has proposed a $2 billion plan that has met criticism from superintendents, unions, and lawmakers as being insufficient. Clearly frustrated, Newsom last week implored them to find a solution to reopen.

Newsom told educators in blunt terms that he is willing to negotiate but certain demands, including the call by unions to have all teachers vaccinated before school starts, were unrealistic given the shortage of vaccines.

“If everybody has to be vaccinated, we might as well just tell people the truth: There will be no in-person instruction in the state of California,” Newsom said last Thursday.

The same day, the CTA sent the governor a letter again criticizing his plan.

“The virus is in charge right now and it does not own a calendar,” the letter said. “We cannot just pick an artificial calendar date and expect to flip a switch on reopening every school for in-person instruction.”

Kiley assailed teachers unions for allegedly – more than any other special interest group – “being responsible for the state’s decline.”

“We’ve seen that on stark display here during covid-19 because it’s the force of these unions and their control over Newsom that has caused our schools to be shut down to a greater degree than any other state (and it’s) done, incalculable harm for millions of kids,” Kiley said.

The disfunction has fueled a recall campaign against Newsom. As of Monday, Recall Gavin 2020 – the main organization behind the effort – said they have collected more than 1.4 out of the 1.5 million needed to qualify for a ballot. They have until March 10to collect and validate the required number of signatures.

Kiley predicted that the CTA’s role in school closures will be remembered by Californians “beyond the implications of the recall.”

“one of the things that might come out of this … in the long run is that the CTA has been ruining public education in California for a long time,” Kiley said. “They’ve been limiting school choice, they’ve been condemning poor kids to failing schools, and they’ve created a public education system which does the worst of any state for poor kids or any state other than Alaska.”

“So now that the public has sort of seen that dynamic for what it is, I think it might be harder for them to play that game going forward and perhaps there’ll be an opportunity for meaningful education reforms.”

Fox News has made repeated attempts to contact the Newsom administration for comment on the recall but has received no reply.